Posted in: Disc Reviews by Gino Sassani on January 13th, 2014 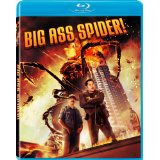 “If you were a spider, where would you be?”

Unfortunately, I happen to know the answer to that question: here at my house. When director Mike Mendez was looking for locations to shoot his SyFy-styled Big Ass Spider! he could have looked no farther than the spider-friendly environs of Tampa, Florida. In fact, he could have set up his equipment in my living room and gotten himself a Big Ass Spider, to be sure. They’re called huntsmen. I call them Rambo Spiders. In any case, or name, they grow big enough to move the furniture and cart off small children (up to about 16 years old). I could have given some spider-hunting lessons to star Greg Grunberg and company. And they could have had it for much less than they paid to create Big Ass Spider!.

Missed opportunity aside, I was rather eager to watch this one. I went into the film expecting pretty much a movie on par with the stuff they’ve been churning out for SyFy. When I come upon my Rambo Spiders, it’s always a rather unpleasant surprise. Watching this film was the opposite. I was impressed with almost everything about this film. Don’t get me wrong. We’re not talking serious award-worthy material here. If you can’t tell from the title, this film is here strictly to entertain, and entertain it most certainly does.

Alex (Grunberg) is an exterminator with a big heart. His clients can’t often pay, so he takes things like fruit bread for getting rid of their pests. A bite from a brown recluse spider sends him to the ER where a mixup from the Army has sent a body bag containing an alien spider. Of course, they were conducting experiments headed by Major Tanner (Wise) and scientist  Lucas (Bauchau). The spider gets loose just has Alex realizes he can’t pay his own medical bill. (He probably couldn’t get on the healthcare website, either.) Alex teams up with security guard Jose (Boyar) who is more a sidekick than helper. Along the way Alex falls for Army cutie Karly (Kramer). She’s a tough Lieutenant with a flair for getting in a tight spot. Just what Alex needs as he rides to the rescue.

Mendez never tries to pretend to be anything than what he is here. It’s a mindless giant bug film. Where he makes the effort count is his approach. You can tell that he’s a fan of the old science fiction films that have come before. He understands that you can have great fun without turning the movie into a huge farce.

His first good move was in the cast. Greg Grunberg was made for this movie. You can tell he’s having an enormous amount of fun at every turn. It’s like he’s waited his entire life to be in this film. Compare that to the typical SyFy film where the cast always appears embarrassed to be there, and it shows in the performance. Grunberg’s not ashamed of this movie at all. He revels in every minute, and it goes such a long way in bringing the audience along for the ride. He’s not the only one.

I’ve always liked Ray Wise, and he steals every scene as the no-nonsense Special Forces Major here. Again, he’s taking it all seriously. It’s even harder for Wise and that much more appreciated. At least Alex gets to play a lot in this film, while Wise has to make the tone darker and “less fun”. He does it with an almost deadpan look and stiff stature, and he never once succumbs to the temptation of winking at the audience. He knows that Mendez and the film itself are doing that for him. He’s the straight man here, and he plays it to perfection.

The comedy relief in this comedy is Lombardo Boyar. He throws out every Mexican stereotype in the book and maybe even adds a few of his own. I can almost see Cheech Marin in the role. There are times it appears he’s doing a perfect Cheech imitation. I’m sure there will be critic attacks on the obvious stereotypes, but it’s all done in fun, and nobody’s getting hurt here. OK, the spider eats a few folks along the way, but that’s something else altogether.

The only disappointment in the cast was Patrick Bauchau. I’m usually a huge fan. He was great in The Pretender for so many years. Here he does appear embarrassed to be here and has very little to say and do. This is the guy who usually gives us all the silly technobabble and warning of impending doom. He’s completely unconvincing and phones in every line. Too bad for both Bauchau and for the film. Let’s leave him off the sequel. In the end, his character is perfectly useless. We didn’t really need him at all.

The effects aren’t going to compare with big-time f/x films, but in the budget that we have here the money shows up on the screen. The spider is better than most of these creatures you get. Sure, it’s not up to The Hobbit standards, but Mendez didn’t have hundreds of millions to spend over several years. This is guerilla filmmaking at its best. Most of the shots are obviously stolen. I don’t think these guys played around with permits and the like. It was shot on the run, and it works flawlessly with the rest of the film’s style and energy.

And that’s what this film has more than anything. There’s a certain energy here that is rare in these kinds of films. Perhaps it’s best that we don’t get a lot of technobabble. There’s less false sense of urgency and more boots on the ground kicking big spider ass.

Looking at the title, you know exactly what you’re getting. What you wanted to know here was if it stood out against the huge number of films like this that come out every week. The answer is a big-ass yes.

Big Ass Spider! is presented in its original aspect ratio of 1.78:1. The 1080p image is arrived at with an AVC MPEG-4 codec at an average 25 mbps. It’s a low-budget film, and the production value shows here. Still, I think that you get a kind of found-footage quality and atmosphere without all the shake, rattle and roll. Black levels are a little better than average. There are times blacks suffer a little digital noise that keeps you from getting any real inky black. Shadow definition also suffers, and details can get lost in the shadows. In high definition the spider does lack any real detail, as well. There is some shimmering here that can taint the illusion. The sharpness and detail come into play best when you get actor close-ups. These are spectacularly crisp and detailed.

The Dolby True HD 5.1 is admittedly a bit of a letdown. There isn’t enough sub driving going on here to add much impact to the huge scenes. There are some nice aggressive surrounds with gunfire but little else. The focus here is really on the dialog, and that does come through cleanly at all times.

The Audio Commentary with director Mike Mendez, Greg Grunberg and Lombardo Boyar is one of the most fun and entertaining commentary tracks you’ll find. There’s plenty of laughing, and they obviously are still enjoying the experience. It’s absolutely worth a second run through of the short film.

Big Ass Spider!! Premiere: (5:07) This is mostly promo footage from the film’s premier in Austin Texas. Fans in line talk about their expectations, and Mendez gives a presentation before the screening to fire up the crowd.

Interviews With The Cast: (1:23) OK, this is about as promo as it gets and very short.

This wasn’t the first spider comedy to come along. Much more money was spent on such titles as Arachnophobia and Eight-Legged Freaks. Money may buy you better f/x and name actors. It doesn’t buy you the kind of fun you can expect out of Big Ass Spider!. It eats both of those other films for lunch. I’m going to go out on a limb here and say there’ll be a sequel. It’s a short limb because a mid-credits scene pretty much sets one up. If these guys can do this on the same kind of budget, or even less than SyFy does it., why can’t they put out consistently entertaining movies? “I ask myself that question every day.”

Gino Sassani is a member of the Southeastern Film Critic's Association (SEFCA). He is a film and television critic based in Tampa, Florida. He's also the Senior Editor here at Upcomingdiscs. Gino started reviewing films in the early 1990's as a segment of his local television show Focus. He's an award-winning recording artist for Omega Records. Gino is currently working on his 8th album Merchants & Mercenaries. Gino took over Upcomingdiscs Dec 1, 2008. He works out of a home theater he calls The Reel World. Favorite films: The Godfather, The Godfather Part II, The Body Snatcher (Val Lewton film with Karloff and Lugosi, not the pod people film), Unforgiven, Gladiator, The Lion King, Jaws, Son Of Frankenstein, The Good, The Bad And The Ugly, and Monsters, Inc.
We Are What We Are Being Human: Complete Third Season (Blu-ray)