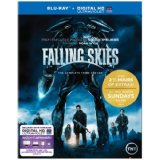 Those four words neatly summarize the overriding theme for the third season of Falling Skies, TNT’s earnest alien invasion drama. While the show still takes its broad thematic cues from the American Revolutionary War, this batch of episodes directly references some of the uneasy alliances formed during World War II. So in between the numerous instances of human characters shooting at aliens — and at each other — the show explored the question of whether the enemy of my enemy really is my friend.

The previous season ended with the surprise arrival of a seemingly-benign alien race in Charleston, S.C., the capital of the new United States of America. We meet up with everyone seven months later. Tom Mason (Noah Wyle), the history professor-turned-resistance fighter, has taken on an even bigger leadership role. That includes forming a fruitful alliance with the Volm, the benevolent group of aliens who have been helping the humans make serious headway against the invading Espheni. But despite the improved outlook for the war, there’s plenty of trouble brewing in Charleston.

Dan Weaver (Will Patton), Tom’s right-hand man, believes the new partnership is too good to be true. He wonders what the Volm — who are led by an alien dubbed Cochise (Doug Jones) — will do with Earth once the war is over. After an important figure in the new U.S. government is murdered, it also becomes clear there’s a mole in their midst. Meanwhile, Tom’s increased responsibilities have led him to inadvertently neglect the people closest to him. Oldest son Hal (Drew Roy) struggles with what appear to be crippling nightmares, middle son Benji (Connor Jessup) debates getting rid of the alien appendage that makes him a more valuable fighter, and youngest son Matt (Maxim Knight) displays a rebellious streak as he morphs into a hardened child soldier. Most importantly, the baby Tom had with Dr. Anne Glass (Moon Bloodgood) begins to exhibit some odd behavior.

The show was created by Robert Rodat, whose two most notable big screen writing credits are Saving Private Ryan and The Patriot. So it’s not surprising to see the show’s most recent season mine inspiration from the two major historical conflicts depicted in those films. Tom compares the humans’ tenuous pact with the Volm to the U.S. aligning with Joseph Stalin during WWII. That being said, the show has noticeably toned down the frequency of Tom’s impassioned history lectures, allowing for more skirmishes and character drama.

The characters themselves — even entertaining ones like sharp rabble rouser John Pope (Colin Cunningham) — are mostly less exciting versions of archetypes we’ve seen many times before. Fortunately, Falling Skies benefits from now having 30 episodes worth of development and interplay within its ensemble: enough for us to get to know and develop affection (or irritation) for them, but not enough that we feel like we can’t learn anything new. That sweet spot was most evident in Ep. 8/“Strange Brew”, a dreamlike “flashback” episode that incorporated each of the characters in fun ways. It was also one of my favorite episodes in the show’s run.

Wyle continues to be a solid choice to lead this cast, radiating both compassion and the traumatizing effects of the war. I’ve most enjoyed watching the growth of the relationship between Tom and Dan. Patton has successfully redirected all the grumpiness he used to reserve for brainy Tom toward the aliens. (Even the “good” aliens.) Speaking of which, Jones — who embodied a similar character in the Hellboy movies — once again imbues an otherworldly character with humanity. (More on this in the Special Features.) Meanwhile, Cunningham’s rascally Pope serves as a necessarily bitter antidote for the show’s squareness, and he gets a nice showcase opposite Wyle in Ep. 5/“Search and Recovery.”

On the flip side, I felt a bit bad for Roy, who basically had to channel Willem Dafoe in Spider-Man when Hal goes through an identity crisis in Ep. 6/“Be Silent and Come Out.” (The difference being Dafoe was actually going for over-the-top camp, while nothing about this show suggests that sort of tone.) And Bloodgood was similarly saddled with a pretty thankless task, except Anne’s mental unraveling took up a much bigger chunk of the season. The show could’ve made Anne’s plight more compelling to watch if they’d allowed for the possibility that she really was delusional or suffering from some sort of post-partum depression. Instead, it’s pretty clear from the beginning that there really is something off about Tom and Anne’s baby.

Guests stars this season included Gloria Reuben (Wyle’s ER co-star), as a key figure in the new U.S. government, Stephen Collins (7th Heaven), as an important figure in the old U.S. government, and Robert Sean Leonard (House), as an agoraphobic scientist. Terry O’Quinn (Lost) also reprises his role from the previous season, though it’s apparent someone in the writers’ room called an audible in terms of his character’s significance.

As the season proceeds, the show revisits some of its pet themes, including the reasons some people feel compelled to fight…even when they might not have to anymore. And despite plenty of dark moments, Falling Skies is also a shameless cheerleader for the indomitability of the human spirit. That puts it in stark contrast with relentlessly bleak smash hits like Game of Thrones and The Walking Dead. After spending the bulk of this season in the relative comfort of Charleston, the finale puts our heroes much closer to where they were at the start of their harrowing journeys. The non-spoilery twist is that most of them seem delighted to be there. (Though I don’t think it was realistic that more people didn’t object.) With Falling Skies, this doesn’t signal a pessimistic acceptance of chaos; it’s admiration for a bunch of people who want to do things for themselves.

Falling Skies: The Complete Third Season is presented in an aspect ratio of 1.78:1. The 1080p image is arrived at with an AVC MPEG-4 codec at an average of 16 mbps. I was thoroughly underwhelmed by the previous season’s HD presentation, and the relatively low bit rate on this one didn’t make me feel overly optimistic. So I’m happy to see this set represents a slight improvement, especially when it comes to the frequent nighttime scenes. I’d still love to see deeper, inkier black levels, but we get a much more consistently clean image with decent separation. Overall, the show works within a purposefully drab gray palette. (The exception is the artificially warm glow of “Strange Brew.”) Although there’s a good amount of fine detail during close-ups — including every hair of Wyle’s scraggly beard — the image remains curiously devoid of texture on some shots. A lot of the time, it looks as if the camera lens itself is caked in a thin layer of dust (just like everyone on screen). That could very well be the look they’re trying to achieve, but I still feel like the show should look better than it does.

The Dolby TrueHD 5.1 track similarly takes a baby step in the right direction. My biggest issue before was the relative lack of immersion, particularly during the frequent firefights. Although I still feel like too much of the surround speaker space is dedicated to Noah Sorota’s blandly rousing score, there are some nice bits of directionality involving whizzing bullets and a few traveling vehicles. That being said, there’s a surprising shortage of sub activity, especially during what should be room-rattling explosions or the arrival/departure of a spaceship. Thankfully, this is overall an expertly-balanced track, even though it falls quite short of its showstopper potential.

Behind the Scenes: A collection of six promotional, light-hearted mini docs. “Pope Town” (1:06) and “The New Charleston” (1:29) examine different parts of the fictional new United States. “Gloria Reuben” (0:56) and “Doug Jones” (1:39) profiles two of the show’s new additions. Meanwhile, “Shout Out: Two Popes” (0:53) and “Stunt Man Bradley” (1:40) pay quick tribute to two lower-profile cast members: Cunningham’s John Pope stunt double, and Brad Kelly, who plays Lyle, one of Pope’s acolytes. There is no Play All option, which is annoying with such short special features.

My favorite of the two is Warrior Poet: Creating the Character and Emotion of Cochise (19:36) which heaps plenty of praise on Jones’ performance and shows how the production team mixes practical makeup effects and CGI to create the character. (Cochise was an all CGI creation during his quick cameo at the end of season 2; that would’ve been more challenging for the actors — and more expensive for the production — given the character’s significant role in season 3.)

Karen: The Overlord Next Door (21:23) is a profile of the season’s Big Bad. I enjoyed this one too, since Karen (Jessy Schram) has been a part of the show since the start. This featurette tracks her evolution from All-American resistance fighter to alien leader, putting a (pretty) human face on the alien invasion. There is no Play All option, which is less annoying because there are only two of these.

2nd Watch — Hosted by Wil Wheaton: (2:05:38) Wheaton (Star Trek: The Next Generation/Sheldon Cooper nemesis) emcees this online post show where Falling Skies cast and crew members show up to discuss each episode. (Curiously, there’s no 2nd Watch episode for Ep. 2/“Collateral Damage” included here.) Not surprisingly, Wheaton spends a good chunk of the time fawning over the guests — the show airs on fallingskies.com, after all — but he also gets in some in interesting questions. This is your best source for production insight and anecdotes, since there are no commentaries included on this set.

Falling Skies is a brisk, uncomplicated show that you should have little trouble marathoning if you decide to get caught up in time for the season 4 premiere on June 22. The series has yet to hit its HD ceiling on Blu-ray, but this set is a step in the right direction.