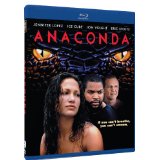 “Tales of monstrous, man-eating anacondas have been recounted for centuries by tribespeople of the Amazon Basin, some of whom are said to worship these giant snakes. Anacondas are among the most ferocious and enormous creatures on Earth.”

Today Anaconda would have most certainly been made as a “found-footage” film. All of the makings of one of these trending movies are there. We have a documentary crew in an isolated area, and most of them get killed. Fortunately, the trend wasn’t so big in 1997, and so Anaconda got to be the film that it turned out to be. Now Mill Creek is offering a budget-priced release of the film in high definition on Blu-ray. Is it worth even that price? Read on…

Anaconda has acquired a small cult following and even spawned a couple of sequels. But for whatever reason every time I’ve had the opportunity to watch the film I’ve opted for something else, partially because both of the stars of Anaconda (Ice Cube and Jennifer Lopez) have gained their notoriety as musicians. I was initially skeptical of what kind of movie this was going to be, but watching on I was surprised to see Jon Voight and then lesser-known Owen Wilson gracing the screen. Ultimately creature films are really finicky in terms of quality, but Anaconda seems to have a decent plot and cast. Will Anaconda prove to be well worth the wait, or will it slither out of sight and mind?

Terri Flores (Jennifer Lopez) is the director of a documentary about a long lost Indian tribe in the Amazon, who along with her crew including cameraman Danny Rich (Ice Cube) and Professor Steven Cale (Eric Stoltz) make their way through the treacherous Amazon jungle. Before locating the tribe the crew runs into a stranded hunter, Paul Sarone (Jon Voight). Sarone claims to know where the tribe is located and promises to help the crew. Suspicious of ulterior motives, the crew seems to keep a close eye on Sarone, but is eventually forced to help him hunt down the world’s largest green anaconda snake. Several of the crew members are killed in the search for the snake, and personalities clash while the group fights to survive.

The plot of Anaconda starts off surprisingly interesting, but fails to have any longevity, and the phoniness doesn’t hesitate to consume the film. Initially I was captivated by the scenic Amazon River and the potential horrors of stalking a gigantic snake, an animal which terrifies me even in its most minute sizes. Before long the dialog becomes stale, characters predictable, and storyline cheesy. Apparently after stalking and killing a record-breaking anaconda, we learn that there is in fact an even bigger and more deadly snake! At this point I was hardly impressed with the way the story was going, and it became incredibly predictable from there on, all the way to its disappointing end.

The movie had a few moments which made me laugh, and there were some adventurous aspects which were beautifully shot. But I can’t in good faith recommend this film based upon a pretty backdrop and a couple of zany moments. If you’re looking for a creepy and humorous creature film, I would recommend checking out a classic like Tremors or the more recent Slither, both of which combine the laughs with the horror/thrills much more impressively.

The cast of Anaconda was real hit and miss, with a surprisingly decent performance by Ice Cube and some supporting members which include Owen Wilson and Danny Trejo. But I was extremely disappointed (not to my surprise) with Jennifer Lopez, and more so by Jon Voight, who played a cardboard character I’ve seen a hundred times before. Then there is Eric Stoltz, who I can’t exactly say played a bad role, it was just that the character was so cliché and uninteresting.

Anaconda is presented in its original aspect ratio of 2.40:1. The 1080p high-definition image comes to us through an AVC/ MPEG-4 codec at an average of 25 mbps. Right from the start of the movie you can notice that the picture looks a bit soft in many shots.  However this is much more apparent in a few shots that are taken far back. In shots where the camera is much closer to the object or person, detail can be easily seen.  The up-close shots of the snake, for example, showcase an impressive amount of detail in its scales and threatening eyes. Color presentation is much more consistent, showcasing a cool but varied palette.  Flesh tones are realistic in hue, and the lush foliage looks great.

Anaconda has been presented with a disappointing Dolby Digital 2.0 track. Here the release falls down on the job. Not only isn’t this HD-quality audio, but it’s not even in 5.1. The only thing serviced here is the dialog and some of the score. Otherwise, this is as flat as it gets on Blu-ray.

I’m sure it doesn’t come as a surprise that Anaconda was phony and rather uneventful. Aside from a few thrilling moments, the weak special effects failed to create any memorable scenes. For fans of the film you will be very disappointed to see the complete lack of special features on the Blu-ray disc. Mill Creek offers it at a killer price. Still, only buy this if you are a fan of the film, and if you haven’t yet seen it I wouldn’t bother unless you’re addicted to creature films.

Parts of this review were written by Jeremy Frost

Gino Sassani is a member of the Southeastern Film Critic's Association (SEFCA). He is a film and television critic based in Tampa, Florida. He's also the Senior Editor here at Upcomingdiscs. Gino started reviewing films in the early 1990's as a segment of his local television show Focus. He's an award-winning recording artist for Omega Records. Gino is currently working on his 8th album Merchants & Mercenaries. Gino took over Upcomingdiscs Dec 1, 2008. He works out of a home theater he calls The Reel World. Favorite films: The Godfather, The Godfather Part II, The Body Snatcher (Val Lewton film with Karloff and Lugosi, not the pod people film), Unforgiven, Gladiator, The Lion King, Jaws, Son Of Frankenstein, The Good, The Bad And The Ugly, and Monsters, Inc.
Tosh.O – Collas plus Exposed Arms Antboy