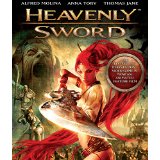 The list of bad videogame movie adaptations is as ridiculously long as the titular weapon in this animated offering. In fact, the film that has best captured the spirit of gaming wasn’t even based on an actual videogame. The bottom line is it’s hard to translate the highly-interactive thrills of videogames into a satisfying, relatively passive moviegoing experience. So maybe the answer lies in targeting inherently cinematic games like Heavenly Sword.

“Prophecies speak of a savior, a deity born of man whose fate is to wield the Heavenly Sword.”

This animated film is based on the 2007 Playstation 3 game of the same name. Nariko (voice of Anna Torv) is a female warrior who belongs to a tribe sworn to protect the Heavenly Sword. Legend has it the sword was used to defeat the demonic Raven Lord many years earlier. Master Shen (Nolan North) is the leader of the tribe and Nariko’s harsh father. He views her as a disappointment and a perversion of the Heavenly Sword prophecy because, um, the world’s savior couldn’t possibly be a girl.

The tribe is soon threatened by the power-hungry King Bohan (Alfred Molina), who fancies himself a God and sets out to acquire the Heavenly Sword. After a deadly attack by King Bohan’s forces, Nariko’s only remaining ally is Kai (Ashleigh Ball), the eccentric, bloodthirsty girl adopted by the tribe. Nariko and Kai embark on a search to find the “Chosen One” fated to wield the Heavenly Sword, which might turn out to be a lowly blacksmith named Loki (Thomas Jane). Along the way, Nariko wrestles with her own destiny and the life-draining curse of the sword.

Fans of the game will recognize most of the characters and the movie’s opening scene, which has Nariko facing off against King Bohan’s army before flashing back to reveal how we got to that point. The film, however, does take some notable departures from the original story, which will likely annoy people who would’ve been happy if the game’s plot had simply been ripped directly from the console and grafted onto the movie.

The good news is Anna Torv, who brought Nariko to life prior to her breakout performance on Fringe, enthusiastically reprises her role for the movie. Though the animation here is often stiff — more on that in the Video section — Torv’s performance conveys the deep-seated bitterness Nariko feels toward her father and her own fate. The bad news is the great Andy Serkis — who not only voiced King Bohan, but served as a writer and “dramatic director” for the game — wasn’t able to take part in this project. Molina certainly knows his way around a big-screen bad guy role, but (unlike Torv) his voice performance isn’t quite strong enough to overcome the disconnect between his acting and the comparatively blank facial expressions of his character.

The biggest departure is probably the invention of Loki, though I felt his inflated importance in the story turned out to be an effectively perverse turn of events. More importantly, the movie retains the relative heft that helped the game stand out in the first place. The story isn’t exactly original; you can find young women rebelling against their so-called lot in life throughout history and any number of Disney movies. However, Heavenly Sword takes the father-child issues it presents seriously enough to make them matter.

Well, there’s that and the fact that the movie also features a few truly cool action sequences. Nariko encounters familiar foes like Whiptail and Roach, and their ensuing confrontations unsurprisingly play out like videogame boss fights. The best of the bunch is Nariko and Kai’s battle against Flying Fox (Barry Dennen), who teleports and multiplies himself in the film’s most inventive and exciting sequence.

Heavenly Sword clocks in at 85 minutes, which is considerably less time than it would take anyone to beat the game. Thankfully, the movie is entertaining enough to keep you from wishing you were controlling the action the entire time.

Heavenly Sword is presented in an aspect ratio of 1.78:1. The 1080p image is arrived at with an AVC MPEG-4 codec at an average of 27 mbps. Though there are some striking moments here — including the 2D animation we see during the opening credits and flashback sequences that recall the style of the Heavenly Sword animated series that served as a prequel for the game — most of the presentation is no better than cutscene quality. There’s an overall lack of fluidity that probably has more to do with the original, photorealistic animation than the Blu-ray presentation. The good news is, given how far consoles have come, saying that something resembles an in-game cinematic isn’t totally an insult. Indeed, colors are purposely muted — save for Nariko’s striking red hair — and there is some strong fine detail on display during close-ups. The less-good news is this Blu-ray doesn’t quite elevate videogame imagery that is about seven years old.

The DTS-HD Master Audio 5.1 track offers a pleasingly dynamic presentation. Surround activity goes beyond simply enhancing the film’s omnipresent score. You don’t have to strain too much to hear the whooshing of arrows during the climactic battle or the sound of a gong ringing out through the entire sound field. Sub activity isn’t overly aggressive, but a low rumble can be heard when catapults lay waste to a village. Sound effects like the unsheathing and clanging of swords are nicely punctuated, though some of the blows that are landed during action sequences are oddly silent. (Again, this is likely more of a production issue than the fault of the Blu-ray.) Overall, everything plays quite nicely with the dialogue, which is presented cleanly and effectively.

The Making of Heavenly Sword: (14:55) Presented in HD, this behind-the-scenes featurette offers some interesting background on the movie’s long production history. (Which helps explain the extended delay between the game’s release and the movie’s arrival.) For example, we learn this project was originally conceived in 2008 as a TV movie/backdoor pilot and sold to SyFy for a six-episode run. Torv and Molina turn up to offer enthusiastic praise, and there’s even talk of a sequel.

A lot of people think big, blockbuster movies have gotten dumber than ever, while big, blockbuster videogames have never been more sophisticated from both a technical and storytelling standpoint. So it’s becoming harder to pinpoint why that trend hasn’t translated into an indisputably great videogame-to-movie adaptation.

Heavenly Sword is not that great videogame-to-movie adaptation. The animation is (not surprisingly, given the project’s limited budget and resources) far from top-notch, but the movie is interesting enough to make you wonder why they never got around to making a sequel to the game.

14 Blades (Blu-ray) Contest: Win Home Is Where The Heart Is On DVD From ARC Entertainment