Posted in: Disc Reviews by Gino Sassani on October 29th, 2014 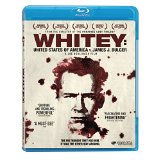 “It was the gang that ran amok. You have people who were being extorted, who talked of having a shotgun barrel stuck in their mouths or machine guns pointed at their groin. Body bags were shown by Bulger as he shakes them down. It was absolute terror.”

It amazes me that I really had very little idea who James J. Bulger was before I watched this film by director Joe Berlinger. How could I have missed this guy? On the run for over 16 years, Bulger was once #2 on the FBI’s most wanted list. Who was #1? That was Osama Bin Laden. So who was this man that came in second only to the world’s most infamous terrorist? That’s what I set out to discover, and Whitey: The United States of America vs. James J. Bulger filled in all of those blanks. When the film is finally over you’ll be asking yourself, “How is it possible I didn’t know this stuff?” One possible reason and the focus of this documentary lies in the fact that the FBI might not have wanted you to know much about this case. Joe Berlinger corrects that oversight with one of the more compelling documentary films I’ve seen in years. In the end, it asks as many questions as it answers. But those questions are powerful ones indeed.

James “Whitey” Bulger spent a good part of his early years in prison. He often bragged that he had done time at the infamous Alcatraz prison. In the 1970’s he pretty much took over South Boston. He ran a six-mile portion of the city as if he owned it all. If you did business there, you paid protection money to Bulger. By the time his reign was over and he went on the run he was charged with 19 murders and 33 counts of federal crimes in total. That doesn’t include the many predicate crimes included in those indictments.

After 16 years Bulger was finally arrested in 2011. His trial began in June of 2013, two years almost to the day from when he was apprehended. He’s a dangerous criminal who finally got caught. So what makes his story so compelling? Bulger puts up a unique defense, one he knows will lead to his conviction. He admits he’s a murderer, drug dealer, extortionist as well as guilty of other criminal activities. What he refuses to admit is that he was a rat for the FBI during those years he operated in Boston. The FBI says he was just that. This is where it all gets very interesting.

Berlinger uses the start of Bulger’s trial as his focus. It’s federal court, and no cameras or microphones were permitted inside the courtroom. Berlinger uses the next best thing. He uses the court transcripts to point out key testimony, often using the voices of the same players who spoke the words in court. He then uses these key moments to shape the narrative. From here we hear from the principles in the case. Berlinger allows the emotional weight of the piece to come from the family of Bulger’s victims. Many have waited 30 years for justice to be served. With their interviews we see gruesome crime photographs of the victims. Berlinger doesn’t shy away from lingering on the bloody bodies of those who were unfortunate enough to be in Bulger’s way. The effect is chilling, to be sure. This is not the kind of film for those sensitive to that kind of imagery.

But it isn’t Bulger’s brutal crimes that truly take center stage here. It’s this battle over who was playing who during those bloody years. Bulger’s story is that he had FBI guys on his payroll including one Agent Connelly who was indeed later convicted of corruption. According to the feds, Connolly was Bulger’s handler, and it was Bulger who provided hundreds of pages of information to them.

There’s little question what Joe Berlinger believes. He ends up providing a bit of a stacked deck against the FBI story. It’s not so much his bias as a complete lack of cooperation from the FBI. The agency declined to be interviewed or participate in the film. The evidence we sift through comes mostly from Bulger’s defense team. We get to hear from Bulger himself through a phone call with his lawyer on speaker. The U.S. Attorney’s prosecution team do participate, offering only denials and very little evidence to back it up.

We get to see the informant records, and these are taken to experts on these kinds of files, who all find them seriously lacking in the kind of detail or completeness these files typically contain. The piece begs some serious questions about federal officers allowing this brutal activity to continue, possibly for their own personal gain. The victims’ family members find themselves more sympathetic to Bulger’s defense team, because they are the only ones giving them any real information. There’s a ton of bitterness and resentment toward the government by these family members. In one instance it is alleged that the federal officer in charge made a deal with Bulger that he would protect Bulger’ from the law if Bulger would protect him from the mafia mobsters he had gone after and convicted. Of course, there is no evidence of this agreement, and the FBI agent is no longer alive. Still, Berlinger presents a sobering case that will likely never see any real answers.

The case was big in Boston, and several local media people have written books derived from their own coverage of the case. They are also interviewed here and provide various takes on the case. This is not a static film. Berlinger keeps it moving and allows us to spend time, particularly with the family members out and about. It’s not all typical office settings and stationary talking heads.

In a startling set of circumstances one of the trial’s witnesses was suddenly and without explanation removed from the government’s witness list. He was found dead the next day. Berlinger is careful to point out that it appears unrelated to the case and involved a business associate who poisoned the man. The timing, however, doesn’t sit right with many of the family members who knew the man well.

Most of the people who worked under Bulger have cut deals. They are interviewed here as well. We also get to see them testify in other cases that were not closed to the cameras. It’s more effective when we see them in street clothes, free men because of their deals, talking about what they did.  It’s a bit chilling to watch a guy in a “Southie” jacket talk calmly and unregretfully about the murders he committed. There’s a certain smile and smugness that Berlinger catches just for a fleeting glimpse. The film is filled with these kinds of moments. Berlinger manages to frame them in a narrative that flows smoothly and offers those crucial seconds that make you stop and think. Isn’t that what good documentaries ultimately do?

Whitey is presented in its original aspect ratio of 1.78:1. The 1080p image is arrived at with an AVC MPEG-4 codec at an average 30 mbps. Look, this is a documentary. The interviews look great. There’s some vintage material here that isn’t going to look so good. It has to be expected. You get nothing in the image that would distract you from the story it’s trying to tell.

The DTS-HD Master Audio 5.1 is strictly dialog. A few surrounds come into play when interview subjects are out on a street driving in their car. It’s all crystal clear.

We may never know who was playing who. We do know the kind of man Bulger was, and he makes no apologies for it here. That doesn’t mean he’s lying. Bulger is in his 80’s and likely won’t even survive his appeals. He has little to lose at this point. He’s not getting out, and he knows that for certain. There is evidence to suggest that the FBI wasn’t really in a hurry to catch him, afraid of the story he eventually told. It would have been nice to hear their side of the story, and it certainly brings up questions that they declined to do that. One thing is for certain. Bulger was a ruthless gang leader who left behind a wake of terror and devastation to the people who knew him. Berlinger presents us with images of a reign of terror. Watch it, with this warning. What you see and hear here  “you don’t forget”.

Gino Sassani is a member of the Southeastern Film Critic's Association (SEFCA). He is a film and television critic based in Tampa, Florida. He's also the Senior Editor here at Upcomingdiscs. Gino started reviewing films in the early 1990's as a segment of his local television show Focus. He's an award-winning recording artist for Omega Records. Gino is currently working on his 8th album Merchants & Mercenaries. Gino took over Upcomingdiscs Dec 1, 2008. He works out of a home theater he calls The Reel World. Favorite films: The Godfather, The Godfather Part II, The Body Snatcher (Val Lewton film with Karloff and Lugosi, not the pod people film), Unforgiven, Gladiator, The Lion King, Jaws, Son Of Frankenstein, The Good, The Bad And The Ugly, and Monsters, Inc.
Rick & Morty: Season 1 “31 Nights of Terror” A Letter to Momo (Blu-ray)