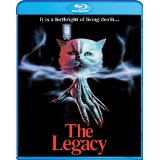 If something seems too good to be true, then it probably is. It’s a lesson that’s hardwired into our brains, yet often proves impossible to resist. That idea is also what jumpstarts the action in The Legacy, which is equal parts stylish, campy, and compulsively watchable. The 1978 thriller, directed by future Return of the Jedi helmer Richard Marquand, now makes its Blu-ray debut courtesy of Shout! Factory.

Margaret Walsh (Katharine Ross) can hardly believe her luck when she receives a $50,000 check from an anonymous client in England to take on a mysterious interior design gig. Meanwhile, her strapping boyfriend Pete Danner (Sam Elliott) flat-out can’t believe it, but Margaret insists they check it out since her family has blood ties to England. The Los Angeles couple is enjoying a motorcycle ride on the picturesque English countryside when they’re accidentally run off the road by a car. The man in the car is Jason Mountolive (John Standing), and he invites Margaret and Pete to hang out at Ravenhurst — his lavish estate — while Pete’s bike is being repaired. As soon as the couple arrives, they sense something is not quite right. Mountolive is nowhere to be found and creepy Nurse Adams (Margaret Tyzack) isn’t exactly forthcoming with answers. (And what’s up with the creepy cat that always seems to be hanging around?)

“You know what that means? The Six?”

Things get even stranger when five rich and powerful guests arrive via helicopter…and they all seem to have been expecting Margaret. (Not so much Uninvited Guest Pete.) Margaret soon learns that she is connected to these five supposed strangers — who are all indebted to Jason in some way — along with being bonded to Ravenhurst itself. One of The Six stands to inherit Ravenhurst (and its mysterious powers), but that task becomes trickier when the houseguests start dying in increasingly grisly ways.

The Legacy’s “handful-of-guests-dying-one-by-one-at-a-mansion” conceit gives the film a passing resemblance to William Castle’s 1959 chiller House on Haunted Hill. But the movie is spiritually closer to a pair of thrillers that immediately preceded it in the late ‘70s. There are strong remnants of 1976’s The Omen or any other horror flick that suggested Satan or other demonic forces were exerting their influence. (Let’s just say the Richie Riches in The Legacy didn’t acquire their fortunes through hard work and determination.) I also spotted plenty of 1977’s Suspiria, another nightmarish story about a woman in a strange land who comes face to face with a spate of supernatural murders.

But whereas the disorienting (arguably off-putting) weirdness in Suspiria feels intentional, there are several beats in The Legacy that come off as either sloppy or ridiculous. (The movie *really* pushes that creepy white cat, and Jason Mountolive’s power and motivations are vague to the point of being problematic.) The story also has Margaret and Pete go through jarring shifts in their temperaments. One moment Pete is cranky about being stuck at Ravenhurst, the next he’s settling in and telling Margaret not to worry about everyone’s odd behavior. Margaret herself doesn’t undergo the gradual descent into madness we’ve seen in something like Rosemary’s Baby; hers is a more underwhelmingly passive arc until the very end.

Marquand amusingly tosses in some ’70s-style grooviness to offset the old(er)-school haunted house thrills, but it doesn’t always work. The movie’s opening credits theme song, “Another Side of Me”, is performed by Kiki Dee and accompanies Margaret and Pete’s ill-fated English countryside drive. (I can’t tell whether Marquand was being ironic with his sappy, soft rock soundtrack choices…my guess would be no.) On the other hand, I enjoyed seeing The Who’s Roger Daltrey turn up as one of the charmingly entitled party guests because, well, it was the ’70s! All this looseness is occasionally broken up by one the movie’s gruesome killings. I get the feeling they’re supposed to be horrific — and each death is eventually revealed to be tailored for its victim — but it largely comes off as campy.

Ross and Elliott — who met on this movie and have been married more than 30 years — make for an appealing couple. As I alluded to earlier, I wasn’t overly impressed with Ross’s performance, but the striking actress’s regal carriage made you believe why Mountolive and his guests would make a fuss over her. On the other hand, Elliott’s American cowboy swagger was evident and undeniable even back then. I love that the movie found a reason for Pete (and the actor playing him) to ride on horseback. (And I also enjoyed seeing what Elliott actually looked like before he went gray.) Daltrey acquitted himself well enough in his smallish part, but I wish Standing’s arch work as Mountolive had been given a bit more screen time before the character was put to bed.

In the end, The Legacy isn’t very likely to frighten modern horror fans. The good news is there’s a decent chance its intriguing story and brazen ridiculousness will keep them entertained anyway.

The Legacy is presented in an aspect ratio of 1.85:1. The 1080p image is arrived at with an AVC MPEG-4 codec at an average of 21 mbps. I was pleasantly surprised by the clarity and warmth of this presentation. (The uber-schlocky Blu-ray cover art probably lowered my expectation that I’d be seeing something that actually looked good.) The colors, particularly during the English countryside jaunt, certainly don’t pop the same way they likely would in a modern HD presentation, but the image is largely artifact-free (after the first minute or so). Black levels also feature surprisingly strong separation, although the presentation’s flaws (a little aliasing and banding) are more apparent during darkened sequences. The image is also consistently somewhat soft, but it’s in a pleasing way that flatters Ross. Overall, a surprisingly clean and faithful presentation that is quite faithful to its time period

The DTS-HD Master Audio 2.0 track is essentially mono, which de-claws the more intense set pieces. Fortunately, there are no significant technical deficiencies to report. (No popping or hissing to speak of.) Dialogue is clear and quite well-balanced with all the other elements in the front channels.

Interview with editor Anne V. Coates: (13:47) Functions more as an overview/swell tribute to Coates — who has worked on everything from Lawrence of Arabia to Fifty Shades of Grey in her Oscar-winning career — although she does have fond memories of working on The Legacy. She especially recalls watching stars Ross and Elliott fall in love on set. Presented in HD.

Interview with special makeup effects artist Robin Grantham: (10:46) While he also talks about his career (which includes makeup work for An American Werewolf in London), Grantham offers more of a direct and informative breakdown/behind-the-scenes look at some of the grislier moments in The Legacy. Presented in HD.

The Legacy was made during a time when black magic and Satanic cults were all the rage in Hollywood, yet you still get the feeling it arrived a little late to the party.

That being said, it’s still a fun, flawed film to revisit, and I applaud Shout! Factory for stepping their game up for this Blu-ray release. (This features an above average visual presentation, and they tossed in a pair of new special features, which doesn’t always happen with lower-profile catalog titles.)