Posted in: Disc Reviews by Gino Sassani on January 7th, 2016 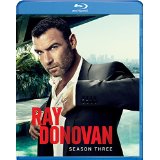 You can say that again. The television landscape is changing, at least on cable. Ray Donovan is the latest in the string of new shows that are attracting talent once thought out of reach for television. A show starring Liev Schreiber and Jon Voight: this Showtime series looked to be something very special… and it has gotten better… perhaps a lot better.

Ray Donovan (Schreiber) is a Boston native who moved his entire family including his two brothers out to L.A. There he built an empire by being very good at what he does. What he does is fix problems, particularly for big-name celebrities and the lawyers who coddle represent them. His father has spent 20 years in jail for a crime he might not have actually committed. But Ray hates his father enough to have set him up and sent him to jail. Ray has a wife, Abby (Malcomson) whom he keeps at an arm’s length of his dubious business dealings. He also has a son and daughter who are somewhat conflicted in their feelings for their father. If you’re not up to speed, you really want to check out the first two seasons. This is not a good place to start.

The big news for season 3 is the loss of Elliott Gould’s Ezra character. Ezra was a father-figure to Ray in every way Mickey (Voight) never was. The relationship between these characters was quite strong, and you will find yourself missing both Ezra and Elliott. With Ezra gone, the movement away from his “fixer” roots gets stronger on the show. Ray is spending more time fixing his own problems and those of his family than he does dealing with clients.

With Ezra gone, enter the character of Andrew Finney, played quite extraordinarily by Ian McShane. Finney is a super-rich and powerful man who manipulates Ray into working for him. It’s one of those Godfather favor deals that finds Ray needing help and Finney having the power to do it. He also ends up caught between the politics of Finney and his daughter Paige, played by Katie Holmes, the best I’ve ever seen her. She’s almost unrecognizable and has come a long way from the starry-eyed girl who once romanced Tom Cruise. She’s a powerful character who wants to own an NFL team and bring it to L.A. It’s a timely plot with three teams currently seeking to fill the decades-long gap of football in the nation’s second-largest market. Ray finds himself along for the ride as a 3% partner, but the path is anything but straight. McShane and Schreiber become the new dynamic to watch. This makes the leaving of Gould a bit more bearable. The two are dynamite together. It’s not just the surface stuff going on here. Both actors revel in the nuances of this relationship. There’s so much beneath the surface as they are actually playing a fascinating game of chess with each other. This is where the season is at its best.

Another great addition is the arrival of Hank Azaria as an obsessed FBI agent who wants to bring Mickey and Ray down. He ends up having to deal with them over the Sully killing. He wants to be the head of the agency, so he ends up taking credit for Sully’s murder as an FBI operation. That puts Mickey in a pinch, and unfortunately for Ray brings him out of his tropical hiding. Azaria plays a wonderfully wicked character here, and he steals a lot of scenes even next to Voight and Schreiber.

The killing of the abusive priest is also going to come back to haunt the Donovan family. The Vatican has sent an investigator priest, Father Romero, played by Leland Oser. He infiltrates Bunchy’s counseling group and passes himself off an abuse victim who also got revenge in order to get Bunchy to confess to him. This doesn’t end up going in the direction we suspect, and it turns out to be something of an emotional crisis for Ray, who must deal with his own abusive history. It all leads to an interesting confrontation during the season finale that I never saw coming.

Of course, John Voight’s Mickey is going to be causing his own trouble. He takes advantage of a situation to place himself as the head of a prostitution and drug ring. He’s fooled himself into believing he’s doing it for the girls. He ends up partnering with son Daryl (Hall). The last time he tried to partner with a son, he left Terry holding the bag when a robbery of a pot house goes pretty badly. Now he’s in bed with an Armenian mob and is soon in over his head. The only way to stop a bloody war is to begin to snitch for the FBI, but we know Mickey’s going to find a way to mess that up just as badly. It all ends with a bloody confrontation in the season finale.

Bunchy finds love in a Mexican wrestler with whom he develops a rather interesting dynamic. Teresa is played by Alyssa Diaz, and the two end up married before the end of the season. He also ends up almost missing said wedding because Mickey’s gotten him in trouble. Meanwhile Terry is almost killed while he was in jail, and the effects of his experience and Parkinson’s are starting to take a huge toll on him and the family.

Finally, Bridget (Dorsey) has a lot to do this season. She starts the season as a witness to a bloodbath when her boyfriend is killed in a blood feud. She’s then attracted to her math teacher, which also leads to a big part of the dynamic season finale.

In the end Ray has to confront who he is and the damage he has done to his own family. Schreiber gets to explore a greater range with a character that is heading for a crossroads. Next season should be very interesting. Ray’s finding himself emotionally alone. He’s even put tremendous distance between himself and Avi (Bauer), who has to make a horrible choice to protect Ray, a choice that Ray may never forgive. These characters are certainly not standing still. Look for an explosive finale that puts these characters in a new place for season 4.

Each episode is presented in its original aspect ratio of 1.78:1. The 1080p image is arrived at with an AVC MPEG-4 codec at an average 25 mbps. No question that this high-definition image presentation looks good. Colors are very natural, and black levels are solid. There is plenty of detail in this rather sharp image. Actor close-ups can look absolutely stunning. There’s a kind of glossy look at times, but most of the time this is a pretty realistic image.

The Dolby TrueHD Audio 5.1 is not often called upon to do much more than dialog. There are some nice musical pieces from time to time, and they do pop. Everything is clean and clear, but I wouldn’t expect any less.

The show has gotten better, but I’ve had to abandon my original hopes and expectations. This show is never going to be about the fixer job or Ray’s business. It’s going to be about the craziness of the Donovan family. Once you learn to appreciate just how complicated and dysfunctional that is, you begin to appreciate the incredible acting talent here across the board. The writers have done a pretty solid job of creating relationships that never stop entertaining or surprising you. “It’s going to be a great adventure.”

Gino Sassani is a member of the Southeastern Film Critic's Association (SEFCA). He is a film and television critic based in Tampa, Florida. He's also the Senior Editor here at Upcomingdiscs. Gino started reviewing films in the early 1990's as a segment of his local television show Focus. He's an award-winning recording artist for Omega Records. Gino is currently working on his 8th album Merchants & Mercenaries. Gino took over Upcomingdiscs Dec 1, 2008. He works out of a home theater he calls The Reel World. Favorite films: The Godfather, The Godfather Part II, The Body Snatcher (Val Lewton film with Karloff and Lugosi, not the pod people film), Unforgiven, Gladiator, The Lion King, Jaws, Son Of Frankenstein, The Good, The Bad And The Ugly, and Monsters, Inc.
Flesh and Bone (Blu-ray) Captive