Posted in: Disc Reviews by Gino Sassani on January 23rd, 2016 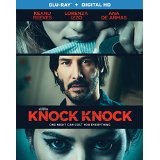 I have to admit that I’m not much of a Keanu Reeves fan. However, I’m a huge fan of Keanu Reeves movies. Let’s face it, Keanu can be quite wooden with as much screen presence as a test pattern. OK, I’m showing my age with that line. But one thing he knows how to do well is pick great films to star in. From The Matrix and the recent very hit John Wick to the underrated The Devil’s Advocate, Reeves can sure pick ’em. The worse case scenario here would be Keanu in an uninteresting movie. Well…Knock Knock. Who’s there? An uninteresting Keanu Reeves film.

Knock Knock finds Reeves playing Evan Weber. He’s an architect with a pretty much idyllic life. His wife is a renowned artist, and he has two great kids. But Evan is feeling a bit neglected on Father’s Day. His wife has just gotten a shipment of catalogues from her recent exhibit, and she’s not exactly paying him a lot of attention right now. To make things worse, wife and kids are off to spend Father’s Day weekend at the beach, while Evan has to remain home to finish a project.

Things get very interesting when two attractive girls show up at his doorstep in the wee hours of the morning, caught in a rainstorm and trying to find an address. Naturally he invites them in. Before he knows it they’re in robes while he dries their clothes, and the conversation is getting a bit risqué. One thing leads to another, and Evan ends up accepting what he describes as free pizza. What promises to become a kind of three-way Fatal Attraction ends up more like a spoof of The Bling Ring.

Actually, this is a remake of a 1977 film called Death Game that starred Sandra Locke, who is a producer on this film. I never saw the original film, but judging by what I’ve read, this one follows that story pretty tightly. This one is directed by Eli Roth, so one has an expectation that the games here will get pretty graphic. It’s an expectation Roth has encouraged over the years, and trying to play against it here was a serious miscalculation. I can understand him wanting to throw the audience off for a change, but this was not the film in which to do so. He leads us to the water, to be sure. Evan ends up tied and at the mercy of these crazy girls, and it’s looking like things are going to get ugly. He leads us to the water but doesn’t let us drink. The “torture” aspect of the film is quite tame, and the movie is left to rely on the antics of actresses Lorenza Izzo as Genesis and Ana de Armas as Bel. In fairness, Reeves doesn’t get a chance to do anything but act confused and scared. If the girls could pull of the crazy menace we might still have a good film, but they don’t.

Truth be told, the girls appear more immature than menacing, and the scenes of them tearing up the house and the wife’s art gets old faster than you would think. You would imagine that if anyone can pull it off, it would be Eli Roth. Instead, he’s exposed a huge weakness. This film needed to be thrilling in a more subtle way, and Roth might have shown himself incapable of pulling off subtle. Maybe there’s a reason his films are so viscerally graphic in nature. Whatever the reason, Knock Knock comes across as totally random in nature with no thought-out plot. The idea has some potential ,and there isn’t a guy on the planet who doesn’t think about what he would do in this situation. It’s all there for a nice twisted bit of storytelling, but Roth and Reeves don’t deliver this pizza.

Knock Knock is presented in its original aspect ratio of 2.40:1. The 1080p image is arrived at with an AVC MPEG-4 codec at an average 35 mbps. Roth does know how to use visuals, and this high-definition image presentation is faithful to his production design. Nothing pops off the screen in the way of color or texture, but the image is quite effective with a totally sharp, clean, and immersive presentation. It’s one of those digital films that might be too flawless. Flesh tones are particularly spot-on accurate. Black levels are deep with plenty of shadow definition. It all takes place in this high-end house, and Roth does at least keep the limited location interesting to look at.

The DTS-HD Master Audio 5.1 is very much about the dialog. The focus is on the inter-play between Evan and these girls. In those moments we get exactly what we need. Unfortunately, the film has some rather loud, chaotic points during the endless destructive rages that are entirely too playful. Surrounds are reduced to musical cues and breaking stuff.

Deleted Scenes: (4:51) There are only two, which are mostly just more footage of the destructive stuff and an alternative ending. You have optional commentary and the play-all ability.

The Art Of Destruction – The Making Of Knock Knock: (14:42) Cast and crew offer the typical thoughts and their takes on the characters.

This is one of those ideas that I’m sure someone thought Eli Roth would be perfect for. I wonder if anyone knew he was going to use it to play against his style. You’ll likely see it as a bait and switch. Sometimes it’s better to just do what you do best. Maybe with a better cast there could have been something here. For my money, when this one comes knocking, turn off the lights and pretend you’re not home. Too late for me. “This is what happens when you break the rules of the game.”

Gino Sassani is a member of the Southeastern Film Critic's Association (SEFCA). He is a film and television critic based in Tampa, Florida. He's also the Senior Editor here at Upcomingdiscs. Gino started reviewing films in the early 1990's as a segment of his local television show Focus. He's an award-winning recording artist for Omega Records. Gino is currently working on his 8th album Merchants & Mercenaries. Gino took over Upcomingdiscs Dec 1, 2008. He works out of a home theater he calls The Reel World. Favorite films: The Godfather, The Godfather Part II, The Body Snatcher (Val Lewton film with Karloff and Lugosi, not the pod people film), Unforgiven, Gladiator, The Lion King, Jaws, Son Of Frankenstein, The Good, The Bad And The Ugly, and Monsters, Inc.
The Diary of a Teenage Girl (Blu-ray) I Believe in Unicorns