Posted in: Disc Reviews by Gino Sassani on September 15th, 2016 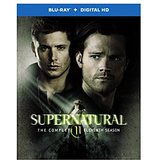 For the first time in a long while, the Winchester Brothers end and begin a season together. Dean’s just had the Sign of Cain removed, and the cost is the approaching darkness. I’m not talking a little storm blowing through. Here in Florida we know all about that kind of darkness. No. This is The Darkness, and it’s the big bad for season 11 of Supernatural. You heard that correctly. We’re talking 11 years with number 12 arriving any day now. Once again it’s “end of days” kind of stakes, and we have another season to save the universe.

“There are two new siblings in town.”

The Darkness turns out to be God’s sister. She had been locked away with the help of Lucifer (Pellegrino) before God created the universe. Now she’s been released by Sam’s spell, and she’s not happy. She intends to destroy creation so that she can enjoy a nothingness that existed when it was just her and God. Fans of the show know that God has pretty much taken a leave of absence of late, and the angels are trying to run Heaven. She’s trying to get God’s attention, and that’s the motivation behind her killing sprees. The show has always been about a sibling relationship. By the end of the season you’ll find that the conflict in the season ends up being very much the same kind of story. It’s a rather nice juxtaposition of concepts.

The Darkness begins as a little girl. Crowley (Sheppard) attempts to influence the growing power, but you likely know it’s going to backfire. Still Dean is connected to the adult version even before she matures. The Darkness shares the Mark of Cain and is seducing Dean throughout the season. In adult form The Darkness, who calls herself Amara, is played quite nicely by Emily Swallow. She develops an instant and rather eerie chemistry with Jensen as Dean. It’s somewhat surprising how much this chemistry brings some depth and substance to the season.

“Even the monsters are afraid.”

Let’s face it. The brothers have faced the end of days too many times to count. Most of the time they’ve been cut-and-dried big bads. This is one of the more unique seasons. Amara is absolutely powerful and destroys on a grand scale. But her interludes with Dean along with a compelling back story make this a remarkable season. The writers have outdone themselves here. Perhaps it’s because we’re not talking the traditional kind of evil in Amara. It also might be that they’ve created a new element to the good/evil sides of the equation. I’m not sure exactly how to narrow it down, but this story is becoming one of my favorites of the 11-season run.

Of course, the show often treads the gray area between good and evil. Crowley continues to be my favorite character on the show, yes, even more so than Sam and Dean. This is the King of Hell, but he’s also the kind of guy you might want to hang out with. Sheppard continues to deliver some of the best wit on television, and he does it without ever looking like he’s trying. It’s one of the purest, most natural performances on television. And Crowley isn’t in for a good time this season. Lucifer gets loose for a while, and Crowley suffers a bit of humiliation at his hands. In the long run Crowley must work with Moose and Squirrel for his own survival. Amara isn’t just going to do away with the good guys. She’s going to wipe out the bad guys, too. There’s nothing more satisfying on Supernatural than watching Crowley having to work with them. Sheppard lets us know how the demon king feels with just an expression. I love actors who can do that.

Another standout on the show has always been Misha Collins as Castiel. Here’s another very good actor who has managed to truly expand a universe that started pretty much with just the brothers… and the car. We can’t forget about the car. I hope Collins made a little bonus money this season. He gets to play many faces of Castiel this year. He begins as the broken-down “wanted angel” and ends up carrying around Lucifer for several seasons. What a treat to see Collins break out of a kind of beloved character and get to be nasty for a while. Collins pulls it off admirably. The real secret behind this show is its casting. From the brothers through these recurring characters to even the guest stars. Someone in casting deserves a raise.

The bunker is still here, and I have a bit of a love/hate relationship going on. It’s a very cool place, and it opens the show up to so many new possibilities. It also appears to make the writers a little lazy. They lean on it for respite and safety a bit too much. I also don’t like the use of a sudden find in the bunker solving our problems. It does get intruded upon again, but it’s still too much of a safe place. They didn’t lean on it quite as much this season, and we get to see the brothers roughing it a little more and sleeping in the car.

Did I mention we should not forget about the car? There were many sweet episodes this season, but one of them tells a story from the car’s perspective. It’s a subtle thing that you might not even notice at first. That’s the way to tell a story like that. Don’t make it so obvious at first. We also get to see appearances from old favorite characters like Sheriff Donna (Buckmaster) from Minnesota, Sheriff Jody (Rhodes) from South Dakota and her girls. Bobby’s back for an episode. And the best return is our writer Chuck, played by Rob Benedict. He’s the guy who is writing Supernatural stories that really happen. He’s been around for a while now, but his big reveal this season is one of the more clever turns on a character in the entire 11 years. He’s actually …. That would be telling.

In another episode we find out that imaginary friends are real. We meet Sam’s who is now a supervisor in the imaginary friends’ world. He comes to Sam for help because someone is murdering imaginary friends. You might expect this to be pure silly, but it’s better than it sounds, with more heart than you’ll expect.

The guys really need to stop using texts to communicate. Every year someone uses one of the brother’s phones to text the other and lure them into a trap. This year is no exception. In fact it happens so often here, it’s really getting to be silly. At least develop a code, guys. You’re smarter than that.

The season finale is a little touchy-feely and a bit of an anticlimactic moment, to be sure. But on Supernatural, it’s always been the road and not the destination. I did mention the car, right? That’s true of most seasons, and this one is no exception. The result happens too quickly for a 20-hour buildup, but I guess they have to put a fork in it sometime. It’s still a solid season for an 11-year-old show. It will rank as one of the best for me.

Comic Con 2015: (28:45) These visits get to be a mainstay on these Warner features. They’re a ton of fun and get to show how much enthusiasm these fans have for these shows.

Jason Ackles On Directing The Bad Seed: (5:15) Go behind the scenes as the actor directs an episode.

On-Set With SPN – The Real Fan Contest: (29:47) The show ran a series of challenges to find two of the show’s biggest fans. The winners and a plus-1 got to spend a couple of days in the show’s world. This feature follows that visit.

The Winchester Mythology – Shedding Light On The Darkness: (16:30) This one is the traditional profile of the season’s big bad. It also breaks down the major beats for the season.

Digital Magic – Enhancing Sets With Visual F/X: (8:08) This one mostly deals with bringing the regions of Hell to life with a look at how they did the set extensions.

We finally have word on when the show might actually end. The actors in a recent interview expressed the desire to get to the 300th episode, and soon the executives agreed it was a rather fitting place to end the show. That would mean at least two more full seasons and a projected 13-episode final season to resolve all of the show’s elements. Still, it would not be a surprise to me to see it go on longer as long as the ratings keep it going. It’s the CW’s longest-running show, and I suspect it will be there a while longer. They just finished a very strong season, so we’ll have to wait and see when it all ends. Want another season of Supernatural? “Say the magic word.”

Gino Sassani is a member of the Southeastern Film Critic's Association (SEFCA). He is a film and television critic based in Tampa, Florida. He's also the Senior Editor here at Upcomingdiscs. Gino started reviewing films in the early 1990's as a segment of his local television show Focus. He's an award-winning recording artist for Omega Records. Gino is currently working on his 8th album Merchants & Mercenaries. Gino took over Upcomingdiscs Dec 1, 2008. He works out of a home theater he calls The Reel World. Favorite films: The Godfather, The Godfather Part II, The Body Snatcher (Val Lewton film with Karloff and Lugosi, not the pod people film), Unforgiven, Gladiator, The Lion King, Jaws, Son Of Frankenstein, The Good, The Bad And The Ugly, and Monsters, Inc.
South Park: Season 19 (Blu-ray) The Last Reef: Cities Beneath The Sea (UHD Blu-ray) (4K)