The Last Reef: Cities Beneath The Sea (UHD Blu-ray) (4K)

Posted in: Disc Reviews by Gino Sassani on September 16th, 2016 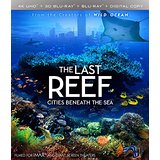 Scuba diving is the closest thing I’ve ever experienced to being on an alien world. Everything around you looks and feels totally different from what we see on land. Even our relationship to gravity changes. There’s nothing like it on this Earth. The ocean is a diverse place and quite resilient. The Last Reef makes this point rather dramatically in the opening minutes of the documentary. It begins with a newsreel that takes us to the nuclear explosion experiments that were conducted off the Bikini Islands in 1946. Yes, that’s where the swimsuit got its name. The Islands were making the newsreels because of the tests. Of course, the entire landmass and surrounding sea were saturated with radiation. The Islands reef was destroyed. It was pretty much left to its own devices for over 50 years. And now it is once again a flourishing reef teeming with incredible life.

From the tests the film shifts gears and becomes more of a standard journey into the waters of several reefs around the world. The film begins to make the connection between a reef and a thriving metropolis like New York City. We’re treated to time-lapse video of various aspects of New York City, particularly the traffic throughways and outside cafes. Of course, these moments are frantic, particularly in time-lapse form. We’re then exposed to the slower, more tranquil versions of some of the same ideas: schools of fish all moving in one direction compared to those highways and feeding stations where rays and sharks can have parasites cleaned from their bodies by waiting fish. The connections are a stretch, yes, but it’s a nice effective way to compare and contrast these two distinctly different “cities”.

In short time the style gives way to a more traditional undersea documentary. We’re treated to some nice lingering shots of marine life that is both common and familiar along with some of the more exotic denizens of the world’s coral reefs. Along the way there’s a rather easy-to-understand explanation of how these reefs are “constructed”. Of course, there’s the comparison to the concrete we use to build the structures of our own cities. Here’s where things go a little astray.

The narration of Jamie Lee gets a bit heavy-handed with his warnings of pollution and the effects of carbon in the water. Certainly, we need to be mindful of the things we dump into our oceans. For decades dumping had been out of control. But the truth is that our oceans are cleaner now than they were 50 years ago. Did we really have to be admonished that our suntan lotions add to the pollution in these waters? The last thing I want to see is someone getting skin cancer because they were worried that they were destroying the reefs. Conservation is an important message, and there is certainly room for that here. After all, it’s part of the whole picture and the educational process. I find that conservation messages are more effective when they are positive. Fortunately, there was some of that to be found here.

That positive message really circles back to the lesson of the Bikini bomb tests. It’s that ability of the ocean to come back from even nuclear devastation, and in the short geological time of a mere 50 years. It’s a hopeful message that provides more incentive to be careful wards of our oceans than the dire warnings of global catastrophe that are becoming more common in these features. I’m glad that the hopeful message was indeed included here.

Finally, it’s the undersea life that you really want to buy this to see. There are wonderfully vivid segments that are worth the price of the disc. From colorful sea turtles to sea slugs that are more extraordinary looking than their name implies, The Last Reef gives us 40 minutes of stunning photography that I’ll discuss in more detail below.

The Last Reef is presented in an aspect ratio of 1.78:1. The ultra high-definition  image is arrived at by an HEVC codec. Of course, the full IMAX aspect ratios are not fully preserved. But I think you’ll find distortion at a minimum here. This ultra high-definition image presentation can be nothing short of stunning. You have the choice of watching an SDR or HDR version of the material. Naturally, you’ll want to opt for HDR if your equipment supports it. There is a living rainbow of colors, from extremes of bright vividness to deep and dark but rich colors. There is evidence of some oversaturation in the red range. It appears to be the biggest flaw with the techs who are transferring these 4K images. There’s more color to work with here, and there’s a temptation to artificially bump up that brilliance. Fortunately, that’s not necessary. The range of wonderful colors is already a quantum leap from what we are used to; there is no need to bump it up to unrealistic levels. I’ll be talking more about this in our next 4K review.

There is also a 3D Blu-ray provided. I’m kind of disappointed that there does not appear to be a 4K 3D capability as yet, because to get 3D you have to sacrifice that incredible sharpness and detail. But the 3D disc is a marvel of its own. Marine life is the perfect medium for 3D. You’ll see fish swim out of the television, and it feels like you can touch them. There’s a pod of jellyfish that look absolutely amazing in 3D. The 3D disc boasts a high MVC codec bitrate of 28/11 mbps.

The Dolby Atmos audio presentation defaults to a 7.1 track. Of course, the narration dominates this presentation but there are some nice surround effects that contribute to your immersive experience. Some of my favorite moments are the times Lee doesn’t speak at all, and he allows us the time to just exist with these images and a nice soothing score. The music does get quite percussive at times, which triggers some nice response from your subs.

There is additional behind-the-scenes footage.

Shout has made me very happy to have become an ultra-early adopter of the UHD Blu-ray format. We had a player before they were in the stores, and I ended up giving some lessons to my local Best Buy techs. There are still some kinks in the road, but Shout has the right idea. These IMAX shorts are perfect releases to bring out the best in the new format. It’s my hope that these are the kinds of releases that will do more to sell the format’s future. The Last Reef is one of those images that is just too hard to resist. At least it is for me. If you’re smart you’ll put a copy of this one “in your hands”.

Gino Sassani is a member of the Southeastern Film Critic's Association (SEFCA). He is a film and television critic based in Tampa, Florida. He's also the Senior Editor here at Upcomingdiscs. Gino started reviewing films in the early 1990's as a segment of his local television show Focus. He's an award-winning recording artist for Omega Records. Gino is currently working on his 8th album Merchants & Mercenaries. Gino took over Upcomingdiscs Dec 1, 2008. He works out of a home theater he calls The Reel World. Favorite films: The Godfather, The Godfather Part II, The Body Snatcher (Val Lewton film with Karloff and Lugosi, not the pod people film), Unforgiven, Gladiator, The Lion King, Jaws, Son Of Frankenstein, The Good, The Bad And The Ugly, and Monsters, Inc.
Supernatural: Season 11 (Blu-ray) Snowden