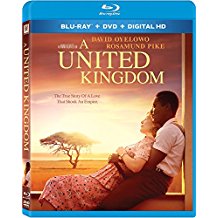 That’s the sort of rousing statement any random politician on the campaign trail might use to rile up a crowd of supporters at a pep rally. And even though those words are spoken here by a man in the midst of heavy political turmoil, the beauty of A United Kingdom — a straightforward but nevertheless impactful fact-based drama about forbidden love — is that they are actually born out of an intensely personal conflict.

Seretse Khama (David Oyelowo) is the heir to the throne of Bechuanaland (now Botswana) in southern Africa. After the death of his parents at age 3, his uncle Tshekedi Khama (Vusi Kunene) began functioning as regent and sent Seretse to London, so he could study law and otherwise prepare himself to be king. In the late 1940s, Seretse meets a white Englishwoman named Ruth Williams (Rosamund Pike) and the two quickly fall in love. Seretse informs Ruth that he must soon return to Bechuanaland to assume his throne, but the pair resolve to make their relationship work and eventually marry. Not surprisingly, their union sets off a series of personal and political landmines.

Uncle Tshekedi believes the people of Seretse’s Bamangwato tribe would never accept a white woman as their queen, especially given the nation’s British colonial origins. Meanwhile, forces in Great Britain’s government — personified here by Alistair Canning (Jack Davenport), the British representative in southern Africa, and Rufus Lancaster (Tom Felton), district commissioner to Bechuanaland — oppose the marriage because it could endanger relations with South Africa, where apartheid was developing. As a result, Seretse faces the prospect of losing his country, the woman he loves…or both.

As with any story that is based on actual events, history is the ultimate spoiler. So the drama in A United Kingdom doesn’t come from whether or not Seretse and Ruth will end up together. Instead, the movie works best as a celebration of freedom in all its forms. (It’s also a helpful reminder that bigotry’s never been exclusively an American product.)

Oyelowo channels many of the same qualities here that he displayed in his breakout role as Martin Luther King, Jr. in Selma. In addition to projecting intelligence and an understated sense of authority, Oyelowo gets to be more of a charming romantic lead here. Conversely, Pike’s breakout came in David Fincher’s excellent and chilly Gone Girl, but the actress gets to show a warmer side of herself while still conveying uncommon strength. (Even though she doesn’t quite get as much to do as Oyelowo.) The scenes between Oyelowo and Pike early on are crucial, since we need to believe Seretse and Ruth would risk so much after knowing each other for a short amount of time.

That early chemistry is also helpful once the second half of the film separates the pair and the story inevitably becomes bogged down with the dry politics of the era; as talk turns to mining prospects and tricky diplomacy, we have to remember why we care about any of this in the first place. Luckily, Oyelowo and Pike deliver. The film also features some lively supporting turns. Kunene fares the best, since Seretse’s “betrayal” is extremely personal to his uncle. On the other hand, the British antagonists are too cartoony by half: all Davenport is missing is a mustache to twirl during every one of his scenes, while Felton works in the same twerp-y wavelength he mastered in the Harry Potter films.

The director is Amma Asante, who has previously explored mixed-race relations in her work, most notably in 2014’s Belle. (A United Kingdom is based on the book “Colour Bar: The Triumph of Seretse Khama and His Nation” by Susan Williams, who is no relation to Ruth.) The story eventually alternates between London and Bechuanaland, and the fact that A United Kingdom got to film on location in Botswana is a major plus for the latter scenes. (The country earned its independence during the 1960s.) More importantly, Asante is savvy enough to make the political personal with effective touches…such as the fact that Ruth’s father (Nicholas Lyndhurst) opposes his daughter’s marriage just as violently as the story’s various heads of state.

A United Kingdom is presented in an aspect ratio of 2.40:1. The 1080p image is arrived at with an AVC MPEG-4 codec at an average of 33 mbps. The early parts of the story are set in London, which is (not surprisingly) characterized by drab backgrounds and a foggy palette. That being said, there are some pleasing and unexpected spurts of color, courtesy of Ruth’s wardrobe. However, this presentation really comes to life when the action shifts to Bechuanaland. Besides offering an image that is crisper, sunnier, and warmer, these portions of the film are the ones that truly take advantage of the wider and more cinematic aspect ratio offered on this disc. In short, bargain hunters will be thrilled with this visual presentation because you essentially get two movies for the price of one!

The DTS-HD Master Audio 7.1 track is dialogue-driven, but does rise to the occasion when the action on screen demands it. Early on, that means some extra power from the rear channels during scenes at the jazz clubs where Seretse and Ruth meet and flirt. Later on, the same swelling, all-channel support bolsters any sequence where Seretse is addressing a large crowd of his people; the ambient/crowd noise and the very subtle sub activity make these sequences feel properly momentous…and a little intimidating. Otherwise, this is an effectively clean and well-balanced track that does right by Patrick Doyle’s sweeping score, but otherwise doesn’t offer too many bells and whistles. (Which makes the extra two channels feel a bit superfluous.)

Making Of: (6:19) Oyelowo, who was also a producer on this project, talks about being enchanted by Susan Williams’ book and shepherding it to the big screen. Cast and crew describe A United Kingdom as a “sweeping love story,” which is why it was important to make sure the politics in the film didn’t overwhelm the bond between Seretse and Ruth.

Filming in Botswana: (6:06) A United Kingdom was the first feature film to ever shoot on location in Botswana. Director Amma Asante talks about the importance of authentically capturing the country’s landscape and faces. Most impressively, the crew even had a chance to film at the house where the real Seretse and Ruth lived.

The Legacy of Seretse and Ruth: (3:48) A brief look at the real-life figures who inspired this film. (Seretse is described as always having a gentle, kingly bearing with everyone.) We also get a glimpse of Ian Khama — Seretse and Ruth’s son, and the current president of Botswana — visiting the set.

London Film Festival Opening Night Gala Premiere: (6:08) A collection of red carpet interviews with the cast and crew where they discuss working on the film and its themes. Asante, in particular, appears thrilled to be screening her movie in her hometown.

There are too many “forbidden love” stories to count, but A United Kingdom takes the concept to a grand scale. It also has the advantage of A) feeling fresh for American audiences unfamiliar with this particular mid-20th century conflict half a world away and B) being true.

The movie can’t help but feel stodgy when talk turns to the politics of the era, but it’s all buoyed by Oyelowo and Pike’s performances along with a sweeping scope applied to an all-too-relatable situation: “my family doesn’t like the person I love.”