Posted in: Disc Reviews by Gino Sassani on September 27th, 2017 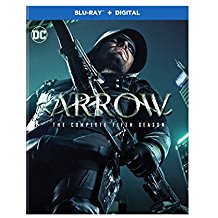 “My name is Oliver Queen. After five years in hell, I returned home with only one goal: to save my city. Today I fight that war on two fronts. By day, I lead Star City as its mayor. But by night, I am someone else. I am something else. I am the Green Arrow…”

Who the heck is this Green Arrow of whom you speak? If that’s your first question, you need to go back a couple of grades and catch up with the rest of us. The comics are good place to begin, but the television universe is its own place and not tied so tightly to the DC comic book universe. Your best place to go to catch up would be the first three seasons. It’ll be worth the effort, and I can get you started with those reviews found Here.

So Season 5 begins with Oliver Queen (Amell) the newly elected Mayor of Star City. It does help that he ran unopposed. His sister Thea (Holland) is his chief of staff, displaying a political ruthlessness that is scary even to Oliver. He is trying to balance the new day job with that of being The Green Arrow at night. But his team is gone. He now has only Felicity (Rickards) and new member Curtis Holt (Kellum) who comic book fans know is also Mr. Terrific. He’s a tech wizard like Felicity but wants very much to join the physical fight. And Felicity is trying to talk Oliver into starting a new team with some of the young vigilantes out there whom he has inspired. Oliver might be reluctant, but things are getting worse, and he is having trouble juggling the two jobs. Felicity has a new boyfriend in Detective Billy Malone (Ritter), and Diggle (Ramsey) is in the Middle East with a black ops unit that’s about to cause him more trouble than he could have dreamed.

So we do see a new Team Arrow. Curtis finally takes on Mr. Terrific, even though it costs him his family life. Fans of the character will get to see his famous T-Spheres. The team also includes Rick Gonzales as Wild Dog. He’s the hockey-masked young punk who lost his family to violence. Joe Dinicol is Ragman, who can animate a 2000 year old cloak of rags. Ragman lost his family when Felicity rerouted the nuclear missile to minimize the loss of life. It will be an emotional thing between the characters. Felicity will deal with more than her share of guilt this season. The most promising new member comes later when Oliver finds a chance to keep the promise he made to a dying Laurel. Juliana Harkavy plays Dinah Drake a meta-human who received siren call powers in Central City back in the Star Labs explosion. We even get Diggle back after Oliver helps him clear up a whole framed-for-stealing-WMD’s treason thing. Finally Quentin has to bring himself back from a long downward spiral of depression and booze after losing Laurel last season.

There are other new elements that deal with Oliver as Mayer. He has to fight a scandal after scandal when his secrets get too close to the surface. Help in that matter comes from reporter Susan Williams, played by Carly Pope, and the city’s D.A. Adrian Chase. Between his new team and the Mayor, folks expect a big betrayal.

That worse is a new big bad in town who calls himself Prometheus. Now this is not the traditional DC character, but a new one developed for the series. He wants to kill Oliver and gets in the face of any other crook who might also try to take Oliver down. This is one of those maniacal plots that has been years in the making. There’s another vigilante killing people who goes by the name Vigilante. There’s also the dynamic Tobias Church, played by Chad L. Coleman, who wants to fill the bad-guy void and take over the crime syndicates. Coleman is fantastic, and the only flaw with Church is that we just don’t get enough of him. Honestly, I liked him far more than the big bad who happens to be yet another archer, but likes throwing stars just a little more. It’s become a “thing” in the DC television universe. Speedster gets speedster big bads and Arrow gets archer big bads. It looks like things will finally see a change-up over at Flash. Hopefully, things will change here at Arrow.

Thing actually must change at Arrow. The flashbacks have finally come full circle. This season most of them occur in Russia, where Oliver is on a mission of revenge that brings him back in contact with Anatoly (Nykl). This has been one of my favorite characters. I’ve loved Nykl since is days on Stargate: Atlantis. Oliver joins his brotherhood called Bratva to reach his primary target, a Russian hood played by Dolph Lundgren. He also ends up training under another daughter of Ra, Talia al Ghul, played by Lexa Doig. This becomes the show’s most complicated flashback story, and those events begin to include unseen moments from the first season. That means we get to see The Hood in action once again. It all leads to a huge cliffhanger finale that brings everyone together in a star-studded and explosive end for the season. We also get the return of John Barrowman. Katrina Law, Manu Bennett, Katie Cassidy, and Nick E. Tarabay in their familiar roles.

There is a four-part crossover, but you only get the episode for this series.

Each episode is presented in its original aspect ratio of 1.78:1. The 1080p image is arrived at with an AVC MPEG-4 codec. Black levels are absolutely vital in this high-definition image presentation. So much of the action happens on rainy nights and in the shadows. Fortunately there’s solid shadow definition here, or this could well be a bloody mess to try to make out. When colors need to stand out, they do. Keep in mind it’s not really as colorful or bright a show as Smallville was. Look more for contrast and textures to replace shiny surfaces. There appears to be something going on with Oliver’s costume this season. They’ve added some kind of green glow in post-production that’s a little distracting, particularly when that aura includes something else in the vicinity of his chest. If it’s an experiment, you guys might want to rethink this one.

The New Team Arrow: (9:47) Meet the new characters and new elements for the fifth season.

Returning To The Roots Of Arrow – Prometheus: (15:18) A profile of the season’s big bad.

The season is honestly too busy. There are too many new characters and far too many big-bad elements. In a way this season closes a first chapter for the character and the show. Flashbacks won’t work now, and I won’t be sorry to see them go. This year they were too involved and a distraction. This wasn’t the best paced season, and I got to watch it all in a manner of days. I can imagine what things must have been like over several months. Season 6 will have to evolve into “something different”.

Gino Sassani is a member of the Southeastern Film Critic's Association (SEFCA). He is a film and television critic based in Tampa, Florida. He's also the Senior Editor here at Upcomingdiscs. Gino started reviewing films in the early 1990's as a segment of his local television show Focus. He's an award-winning recording artist for Omega Records. Gino is currently working on his 8th album Merchants & Mercenaries. Gino took over Upcomingdiscs Dec 1, 2008. He works out of a home theater he calls The Reel World. Favorite films: The Godfather, The Godfather Part II, The Body Snatcher (Val Lewton film with Karloff and Lugosi, not the pod people film), Unforgiven, Gladiator, The Lion King, Jaws, Son Of Frankenstein, The Good, The Bad And The Ugly, and Monsters, Inc.
Tuesday Round Up: September 26, 2017 Veep: The Complete Sixth Season (Blu-ray)