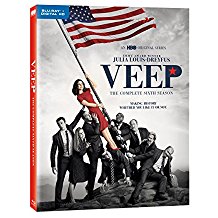 “Ma’am, you need to understand that the president doesn’t actually want you to do anything other than continue to be a woman — which you’re doing a pretty okay job at.”

While Selina Meyer has done a passable job as a woman throughout the first five seasons of Veep, the vice president-turned-(temporary)president and her staggeringly incompetent staff have failed at pretty much everything else. The good news is Veep itself still does far more than an okay job of poking profane fun at the absurdity of Washington, D.C. and its swollen egos, even though season 6 finds Selina’s squad more scattered than ever.

Season 5 concluded with what is perhaps Selina’s greatest indignity, which is no small feat on a series that is essentially a never-ending stream of pride-swallowing humiliations. After unexpectedly assuming the presidency following the resignation of her predecessor, Selina (Julia Louis-Dreyfus) not only failed to become the first woman *elected* to the highest office in the land…but the fictional White House is now occupied by another woman (Andrea Savage’s Acting President Laura Montez) who took credit for Selina’s work toward freeing Tibet.

As a result, season 6 begins with a bit of a time jump. Selina is living the life of a former president, which she outlines to smug former staffer-turned-CBS This Morning co-host Dan Egan (Reid Scott) during an interview. Naturally, clingy/indispensable personal aide Gary Walsh (Tony Hale) is still working closely with Selina, who (much to Gary’s chagrin) seems to have a closer bond with nice-guy aide Richard Splett (Sam Richardson).

Although the team inevitably starts to drift together and cross paths as the season progresses — Mike is brought on board to work on Selina’s memoir, and it’s not because he’s a great writer — Veep largely sticks to its plan of keeping Selina’s former staff apart. But while this allowed the show to mine new territory for comedy — the vapid, cutthroat world of network morning shows; everything that goes into putting together the perfect Presidential Library — I personally missed having the gang together.

To be fair, I didn’t completely warm up to Veep’s band of astoundingly unlikable characters until season 3, when I’d spent enough time with this crazy, cussing work family. Season 6 feels closer in (nasty) spirit to seasons 1 and 2 of the show, when all the characters were quick-witted, interchangeable hate monsters. Selina, in particular, is especially ghastly in season 6; I’m not even sure the character is actually meaner in this run of episodes, but it definitely feels that way considering she is primarily surrounded by doormat Mike and the two nicest guys on the show (Gary and Richard). Obviously, Selina is not meant to be cuddly (or even worthy of our support), but things cross over from funny to flat-out cruel more often than they have since the show hit its stride a few years ago. It all culminates with Selina’s visit to Gary’s Alabama home in Ep. 8/“Judge”…which goes about as well as you’d expect.

That’s not to say this cast isn’t still at the top of its game. If I felt that Selina was too unlikable this season, it’s because nobody beats Louis-Dreyfus at delivering tongue-twisting, devastating insults. (The actress just picked up her sixth consecutive Best Actress Emmy.) Other standouts include Scott leaning hard into Dan’s smarminess as a TV guy and Simons becoming an unexpected Congressional rock star after Jonah takes on the critical issue that is…Daylight Saving Time. But really, everyone on this show is outstanding. The show has also accrued an impressive roster of recurring bit players, which leads to amusing moments like following Dan Bakkedahl’s House Minority Leader Roger Furlong (probably the foulest character of all) home for a wholesome meal and Peter MacNicol’s Uncle Jeff turning up for exactly one scene this season to light the world on fire. Ep. 10/“Groundbreaking” also gives us the amusing origins of Selina’s team. (The episode doesn’t quite stand up to other “stunt” outings from Veep, like the classic “Testimony” from season 4 or season 5’s great “Kissing Your Sister.”)

This is the second season without creator Armando Iannucci, who previously spearheaded the equally-profane, British government-skewing series The Thick of It. (He also directed that show’s feature film spin-off In the Loop.) Season 6 of Veep felt like new showrunner David Mandel and his team further stretching their creative muscles a bit to keep the show fresh, which is obviously admirable even if the show doesn’t quite reach the delirious heights of the last few years.

Veep: The Complete Sixth Season is presented in its original aspect ratio of 1.78:1. The 1080p image is arrived at with an AVC MPEG-4 codec at an average of 33 mbps. Veep maintains a loose, cinema verite filming style that’s a great match for a show with so much improv. If there’s an upside to Selina’s team being so splintered this season, it’s that we got (by far) the most varied visual palette in the show’s run. Season 6 takes us everywhere from Alabama and Georgia (not that one, this one) to Qatar…except not really, since all of Veep is filmed in Los Angeles. Still, there are slight variations in flesh tones — warmer or cooler, depending on the setting — to help sell the different settings. Meanwhile, all of Dan’s CBS This Morning segments are noticeably more vibrant and peppier in the way that network morning shows are aggressively vibrant and peppy.

The DTS-HD Master Audio 5.1 track still exists to serve the salty, oft-overlapping dialogue full of wonderful profanity and wordplay. The track remains exceptional on this front, offering terrific clarity and separation. (The latter is crucial since there is often a roomful of people yammering.) Each and every nasty quip is accounted for here, which is great because there simply isn’t much more to this sonic presentation. Sub activity is virtually non-existent and the (lack of) use of the rear speakers continues to be a missed opportunity considering Selina and her staff are frequently roaming busy hallways or attending public rallies and outdoor functions that offer opportunities for supporting background noise. Then again, this isn’t supposed to be some sort of sonic extravaganza. As with the show itself, dialogue is king here.

Audio Commentaries: We get seven tracks (for Eps. 1, 3, 4, 6, 7, 9 and 10) and they feature star/executive producer Julia Louis-Dreyfus, showrunner David Mandel, actors Tony Hale, Matt Walsh, Timothy Simons, and many other cast and crew members.

The commentaries on these Veep Blu-ray sets have always been a blast to listen to, even if they tend to feel a little overcrowded. My favorite bit of trivia involves a member of Australian Parliament who almost choked to death on sushi from laughing so hard at the season premiere.

Veep: The Complete Sixth Season features all 10 episodes on two discs. The show’s next season will also be its last.

While Veep is obviously still operating at a very high level — the series picked up its third straight Best Comedy Series Emmy earlier this month — it feels like the right time to end the show. The finale featured not one but two presidential candidates throwing their hat into the ring and a surprise pregnancy. It goes without saying I’ll be tuning in to see how Veep finishes out its term.