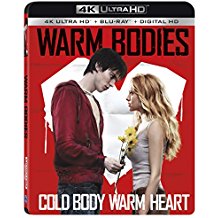 “This is a corpse infected with the plague. It is uncaring, unfeeling.”

When it comes to the overwhelming majority of zombie fiction, it’s all about brains (or rather, BRAAAINS!!!) It’s what the undead hunger for, and a well-placed headshot is usually the only way to kill them (again). And that doesn’t even cover the popular device of using the walking dead as an allegory for an increasingly mindless society. Warm Bodies stands out because it’s more concerned with an entirely different bodily organ. Based on Isaac Marion’s popular novel of the same name, the zombie romantic comedy deals directly with matters of the heart.

Through funny voice-over narration — “God, we move slow!” — we meet a young man named R (Nicholas Hoult). It’s been eight years since an unspecified plague destroyed the world, and R is a zombie who can’t remember the rest of his name…or anything else about his life. (R was wearing a hoodie at the time of the apocalypse, so he assumes he must’ve been unemployed. Zing!) R spends his days shuffling through an abandoned airport with the rest of the undead, which includes de facto best friend M (Rob Corddry).

During a food run — well, more like a food stagger — to the city, the zombies come across a pack of armed youngsters looking for medication to bring back to their walled city, overseen by the humorless General Grigio (John Malkovich). The survivors are led by Perry (a waste of the talented Dave Franco) and his girlfriend Julie (Teresa Palmer), who is also General Grigio’s daughter. Once R lays eyes on Julie, the zombie is smitten. R winds up assaulting Perry and bringing Julie back home with him.

We never do find out what R’s full name is, but given the star-crossed lovers storyline and the presence of a lovely young lady named Juliet, I think we can take an educated guess. Warm Bodies is far from a straight-up adaptation of Romeo & Juliet, but it absolutely nods at Shakespeare’s most famous tragedy. (There’s even a balcony scene, for moaning out loud!)

On top of using the world’s most famous love story as an inspiration, writer/director Jonathan Levine (who previously pulled off the tonally-tricky “cancer comedy” 50/50) incorporates plenty of romantic comedy shorthand into the film. This includes a montage of the couple doing silly things set to a pop song and having the young hipster heroes play with outdated forms of technology. (Both vinyl records and a Polaroid camera are conveniently lying around.) I can’t fully tell if Levine is tweaking these conventions to tell his loopy love story or if he’s using them earnestly. Since the plot involves R becoming more human as he and Julie connect and the zombie’s heart reawakens, I’m leaning toward the latter.

After rocking one of the worst haircuts in movie history in About a Boy, Hoult has grown into a strapping young leading man. R doesn’t say much, and what he does say comes out in stilted Frankenstein-speak. However, the actor is able to emote subtly and effectively through the contact lenses he’s required to wear. Zombies don’t get to be protagonists very often, but Hoult carries the movie quite well. Palmer is a lovely, feisty presence as Julie, but there isn’t much to the character besides being lovely and feisty. Corddry and Analeigh Tipton score a few laughs in the rote Best Friend roles, though I’m not sure why you’d hire someone as funny as Corddry only to barely have him speak. The casting of Malkovich also felt a bit off. I understand the idea of getting someone scary to play Julie’s dad and having the character be more unfeeling than the “corpses” he hunts down. However, the role requires none of the quirky charms Malkovich brings to the table as a performer. They might as well have cast someone like Michael Ironside as the general.

These are minor quibbles. I’m more disappointed with the missed opportunities in this film. For example, I thought giving R the ability to talk right off the bat felt like a convenient storytelling shortcut. The potential was there for a Wall-E type love story where R courts Julie wordlessly before gradually becoming more human. There’s also a plot device involving the zombies’ ability to experience another person’s memories by eating their brain. The movie had the chance to make R seem like not such a good guy by having him surreptitiously gain intimate knowledge about Julie, but Levine doesn’t seem too interested in going there and only scratches the surface. Finally, both the survivors and the increasingly-human zombies — who are inspired by R and Julie’s connection — are menaced by a group of skeletal beasts called Bonies. Unfortunately, these villains came off like an afterthought; it’s as if somebody realized neither the zombies nor the humans were totally suitable antagonists, so they had to invent a new group of bad guys.

Warm Bodies is presented in its original aspect ratio of 2.40:1. The ultra-high-definition 2160p  image is arrived at by an HEVC codec with an average bitrate of 75 mbps. This ultra-high-definition image presentation adds some life to the previous Blu-ray release. Most notable in the upgrade is that slight splash of color. The film is intentionally dark and misty, so there’s just not a lot of color here. But now those little things stand out. R’s maroon jacket is the best example of a standout color in the dankness. It’s a deep red without being overly bright or flashy. The black levels are improved which makes detail a little bit better. Texture and detail are often lost to the massive color correction and fog lens simulation going on here. The Bonies stand out a little better in the dark. Of course, it’s the more subtle zombie makeup than what we are used to that benefits greatly from even that little uptick in sharpness.

The Dolby Atmos presentation defaults to a 7.1 track. This is not a very aggressive surround film. The surrounds are quite subtle, adding a little atmosphere and ear candy. The best material is the use of songs as a large part of the soundtrack. Much of that is source material from a phonograph or CD player. This stuff is absolutely solid. It’s one of my favorite aspects of the style and is reproduced dynamically here. The film doesn’t really have a lot of dialog, but what we get is clear. Subs don’t really shake the house down. They ramp up a little during the firefights, but they aren’t anything to write home about or show off your 18-inch powered sub woofer.

There is an Audio Commentary with Director Jonathan Levine and actors Nicholas Hoult and Teresa Palmer.

The extras are on both the Blu-ray and UHD copy of the film. Both versions are 1080p:

Boy Meets, Er Doesn’t Eat Girl: (9:49) This feature looks at the material from short story to novel to film. There’s a lot of input from writer Isaac Marion.

A Little Less Dead: (16:41) Meet the supporting cast, with most of the time spent on Rob Corddry, who yucks it up quite a bit.

Extreme Zombie Make-Over: (10:11) It’s a zombie movie, so there has to be a makeup f/x feature, and here it is. We get a time-lapse look at the process for the R design from beginning to end.

A Wreck In Progress: (14:59) Go to Montreal with the cast and get a look at the locations. The city was actually selected because they have a real abandoned airport that was built for the Olympics years ago.

Beware The Boneys: (7:09) A look at the f/x and design of the CG creatures in the film.

Whimsical Sweetness – Teresa Palmer’s Warm Bodies Home Movies: (12:38) The actress does a video journal of her time on the set.

Deleted Scenes: (11:11) There are nine scenes with optional director commentary. You also get the handy-dandy play-all option. These include alternative intro and ending for the film.

All that being said, I’m not mad at Warm Bodies, because I believe its heart was in the right place. Zombie stories tend to be dark, cynical, and satirical, so it was refreshing to experience a more optimistic take on the apocalypse.