Once Upon A Time: The Complete Sixth Season (Blu-ray)

Posted in: Disc Reviews by Gino Sassani on October 11th, 2017 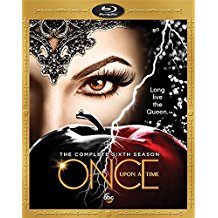 Things are about to change in big ways for the Disney series Once Upon A Time. The sixth season is now out on Blu-ray, and the seventh season has just begun its run on ABC. If you try to go back and forth between these seasons, you might be puzzled more than usual. The show goes into a serious reboot this year. The economics of the show have been pulling it towards either cancellation or pulling in the purse strings. While the ratings aren’t exactly blockbuster, it’s been a clever way for the Mouse House to keep their properties buzzing as they continue to remake many of their fairy tales in live action these days. So there’s a value beyond merely ratings and advertisement revenue to be gained here. The best solution was obviously to rework the show, and that meant most of the cast are not returning. Only Regina (Parrilla), Hook (O’Donoghue), and of course Rumple/Gold (Carlyle) are returning as regulars in Season 7. So if you want to see the show’s swan-song (pun intended), pick up Season 6 on Blu-ray.

Well, you’re invited; now gather up your Disney Fastpass and get in line for more television adventures in Storybrooke. Ah, but before you get on the boat for this year’s ride, you might want to be sure you’re all caught up on the adventures of these characters. This is not the place to start. The mythology of Once Upon A Time gets quite complicated over the previous seasons. This is not the place to start if you want to watch the show. Check out our previous reviews of the first four seasons of Once Upon A Time. Bang it here to get caught up: Once Upon A Time Reviews.

Once Upon A Time continues to reach into the Disney catalog and draws out characters from Aladdin this year. This could be to create that aforementioned buzz for the live-action remake in production. Aladdin (Akdeniz) is a thief who discovers that he is fated to be a Savior, like a certain Swann we know. He is recruited by Princess Jasmine (David) to help save her kingdom from the evil sorceress Jafar, played quite menacingly by Oded Fehr. But Jafar offers him a pair of ancient shears that can cut him from his Savior destiny, which also means an early death. These shears will become an important item for the lives of the Storybrooke characters who are dealing with Emma’s visions of being killed by a hooded figure. Could the shears save her fate?

Hook meets up with another old Disney character. Of course, Captain Nemo was invented in the mind of French author Jules Verne centuries before Uncle Walt was even born. But it just might be Disney’s 20,000 Leagues Under The Sea film that brought Nemo and his submarine The Nautilus into the popular culture. The designs here are very faithful to that film, from the look of the ship itself to the production design inside that includes the iconic iris over the ship’s main port. This time Nemo isn’t played by the likes of James Mason but rather the more Indian-appearing Faran Tahir, who is much closer to the character that Verne imagined. Hook’s interaction with Nemo here will become another crucial plot point later in the season.

Meanwhile back at Storybrooke, there is that good/bad split between Regina and The Evil Queen going on. Both characters are, of course, played by Lana Parrilla. The Evil Queen has put a spin on that old standby: the sleeping curse. Because Snow and Charming share the same heart, they can’t both be awake at the same time. True love’s kiss still works, but when one wakes the other, the kisser goes to sleep in exchange. But there are bigger things afoot in Storybrooke. Mr. Hyde (Witwer) shows up with his clan of untold stories to shake things up a bit. So there’s a huge theme of duality going on in this season. Then there is Rumple and Belle’s baby. In her attempt to keep the baby away from his father, who wants to use the shears to cut him off from his fate, the baby ends up in the hands of the season’s big bad. She’s Rumple’s mother, The Black Fairy (Murray). In the accelerated growth only possible in this fairytale setting, Gideon’s now 23, because he grew up in a world where time was accelerated. Now he’s as evil as they come, and what he’s coming for is Emma. Could he be the mysterious man in the black hood? It’s all really a ploy to allow The Black Fairy into Storybrooke for the final battle with the Savior. What results is a new curse with her as mayor and a beginning of the reboot that is inevitable for Once Upon A Time.

This season is marked by several guest stars who steal the show. I’m a huge fan of Oded Fehr. He’s a bit underused as Jafar, and I expected his role and significance to be larger. There is a nice, touching hint at a Robin Williams tribute when the genie is mentioned. It’s a nice touch that they did not use that character in this telling. Obviously, it will have to be a part of the remake. But some nice words obviously directed at Williams are spoken when the Genie is referenced. Jaime Murray was my favorite playmate for Dexter when she was featured for a season as a person very much a soul mate for that twisted character. She was certainly the most devious, and she brings that here to The Black Fairy. She might be the best evil presence on the show, rivaling Rumple himself and the always incredible performance of Robert Carlyle. It’s interesting that the character cuts his hair short early in the season. It becomes a bit of a running gag. The real reason was that Carlyle was making the change to film Trainspotting 2 during that season. I expected they’d just supply a wig as they already do in his actual Rumple form. Instead it turned into an interesting gag.

The season was also marked with a musical episode directly preceding the two-part finale. This isn’t quite so clever or unusual these days. It started on Buffy The Vampire Slayer and has popped up in shows like Grey’s Anatomy and The Flash. It’s a mixed result here. The music is most certainly in that Disney tradition. But it felt less like one of their shows and more like the live performances you see at the parks. The gestures are exaggerated like they would be for live theatre. Most of the singing is OK, but some of it is bad. As much as I like Parrilla’s performance on the show, she really shouldn’t quit that day job. Rebecca Madder pretty much had the best song in a homage to the Wicked version of The Wizard Of Oz. Lyrically, the tunes often were contrived trying to set up each rhyme. I’m sure it went over pretty big for those Disney princess fans, which is who the episode was really targeted toward.
The last two episodes deal with that final battle, which turns into a setup for the show’s new Season 7 format. We’re introduced to the new main characters, and we get to see the actual reset of the story.

The Storybrooke Songbook – Inside The Musical Episode: (10:23) Go behind the scenes for the filming of the episode. The feature includes recording sessions for the orchestra and the actors.

I’m sure the end of this season caused quite a stir among the solid members of the fan base. I’m told that saving money on cast and other things will increase the f/x budget a bit. That would be huge for this show. So much of the show is entirely green or blue screen, and often it shows rather obviously in the final result. It’s an ambitious situation. I get that. But television shows would be wise to accept some limitations associated with budget and try to do only what they can do well. As our televisions get better in quality, more of these flaws will become apparent. So I’m a little looking forward to seeing the show vary from its six-year-long habit of “Defeat. Repeat.”

Gino Sassani is a member of the Southeastern Film Critic's Association (SEFCA). He is a film and television critic based in Tampa, Florida. He's also the Senior Editor here at Upcomingdiscs. Gino started reviewing films in the early 1990's as a segment of his local television show Focus. He's an award-winning recording artist for Omega Records. Gino is currently working on his 8th album Merchants & Mercenaries. Gino took over Upcomingdiscs Dec 1, 2008. He works out of a home theater he calls The Reel World. Favorite films: The Godfather, The Godfather Part II, The Body Snatcher (Val Lewton film with Karloff and Lugosi, not the pod people film), Unforgiven, Gladiator, The Lion King, Jaws, Son Of Frankenstein, The Good, The Bad And The Ugly, and Monsters, Inc.
Churchill (Blu-ray) “31 Nights Of Terror” Starship Troopers: Traitor of Mars (UHD Blu-ray) (4K)