Posted in: Disc Reviews by Gino Sassani on October 11th, 2017 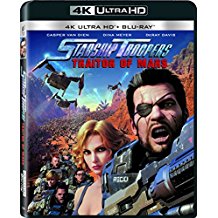 “C’mon, you apes, you wanna live forever? I have only one rule. Everybody fights, no one quits. The bugs have breached Mars, and the Federation’s fleet is too far to help. It’s up to us to save the planet. On the bounce, Troopers! The only good bug is a dead bug! Oorah!”

Robert Heinlein wrote the Starship Troopers novel in 1959. Since that time it has taken on many forms from pulp fiction to comic books. It was finally translated on film in 1997 by director Paul Verhoeven and scripted by Edward Neumeier. The film wasn’t greatly received at the time but became a bit of a cult classic thanks in no small part to home video. There were attempts at live-action sequels, but none of them enjoyed any real success at all. One of the problems with the franchise on film is the inability to really showcase some of the iconic equipment described in the original novel. And while Verhoeven’s film actually did a pretty good job with the alien bug race, the film wasn’t able to feature the amazing suit technology that was the core of the Federation military’s fighting force. So the suits just never became a part of the cinematic universe of Starship Troopers. That all changes with Starship Troopers: Traitor Of Mars.

Traitor Of Mars is a computer-animated feature. That’s why they are able to finally introduce the suits. The film also heralds the return of the original film’s star Casper Van Dien as Johnny Rico. Rico is now stationed at Mars, where his job is to train the Mars recruits. It’s a motley crew, and he finds himself frustrated. Mars considers itself too far from the fighting to be interested in joining the cause, so these newbies don’t exactly represent the Federation’s brightest. The fleet has just left for a huge engagement far away, and wouldn’t you know it, that’s when Mars gets attacked by a swarm of bugs, and Rico’s recruits have to suit up for real and show what they’ve got. Of course, none of this is really an accident. Sky Marshall Amy Snapp (Neves) has engineered the attack to sacrifice Mars in order to rally her approval numbers and the authority for more power. Here the story falls apart a bit, and Rico and his misfits win the day. Dina Meyers also returns in a cameo as the ghost of Dizzy.

Snapp’s motives are a little too simple and crude for a leader who has managed to manipulate the public and the fleet. It’s a good thing this film is an animated one, because she’s very much a cartoon character without nuance or multi-dimensionality. Unfortunately, the same can be said for Rico’s unit of green soldiers. They fill out the necessary stereotypes and are fodder for action and rather quick storytelling. It’s the overly simplified plotting that makes 80-some minutes feel longer, not that you’ll feel like you’re getting anywhere.

The visual design is the bright spot in the entire release. This is nothing like a big-budget computer-animated film. It is direct-to-video, after all. But there are some cool things done with limited resources. The ships look pretty good. The true hero of the design is that we finally get to see at least a little of what the suits bring to the material. It’s not exactly very faithful to the previous films, but the military control aspect of the source material that was so much of a big part of Heinlein’s novel. It was actually written to encourage President Eisenhower to avoid any kind of nuclear limitation deal. Snapp in her most crude form represents that ideology. Unfortunately, it’s in such a crude fashion.

Starship Troopers: Traitor Of Mars is presented in its original aspect ratio of 1.75:1. The ultra-high-definition 2160p  image is arrived at by an HEVC codec with an average bitrate of 75 mbps. This ultra-high-definition image presentation is about what you might expect from a digital source. It’s very clean; I would argue too clean. Atmosphere is attempted with a rather dark, reddish pall to the overall look of the film. Detail presentation is better than detail delivery, so you really get to see the flaws of the low-budget (comparatively) aspect of the computer animation. It appears blocky most of the time. The bugs are the most disappointing. There’s no real individual appearance. They look like mass-produced enemies from a PS3 version of Ratchet & Clank. There isn’t a lot of organic feel anywhere in the presentation. For a 4K image, it’s rather flat and lifeless.

The Dolby Atmos presentation defaults to a rather tame 7.1 track. The audio presentation was particularly disappointing. Here budget should not have been as much of an issue. There are great moments for deep subs and dynamic fights. The surrounds just never fill out with little more than score support coming from the additional two channels. Dialog comes through clear enough, but this is a decidedly flat presentation that fails to immerse you into any of the action.

Traitor Of Mars – A Look Inside: (16:03) This is a two-part feature with a play-all option. The first looks at Bugs/Suit, the second at Story/Character. Mostly talking heads in Japanese with English subtitles. Plenty of conceptual art. This is a behind-the-scenes feature, but of course all of the creation happens behind a computer screen.

This thing is a video game from front to back. I love video games, but it’s not a spectator sport for me. I’ve played games with awesome intros and cut scenes, but I’ve never booted up my system just to access the cut scenes. That’s often an unlockable ability in most games, so I suspect there are folks who really get into them. That’s who this film was made for. I suspect there aren’t a lot of those folks around. Not sure if this has anywhere to go after this, but I expect to find out “on the bounce”.

Gino Sassani is a member of the Southeastern Film Critic's Association (SEFCA). He is a film and television critic based in Tampa, Florida. He's also the Senior Editor here at Upcomingdiscs. Gino started reviewing films in the early 1990's as a segment of his local television show Focus. He's an award-winning recording artist for Omega Records. Gino is currently working on his 8th album Merchants & Mercenaries. Gino took over Upcomingdiscs Dec 1, 2008. He works out of a home theater he calls The Reel World. Favorite films: The Godfather, The Godfather Part II, The Body Snatcher (Val Lewton film with Karloff and Lugosi, not the pod people film), Unforgiven, Gladiator, The Lion King, Jaws, Son Of Frankenstein, The Good, The Bad And The Ugly, and Monsters, Inc.
Once Upon A Time: The Complete Sixth Season (Blu-ray) “31 Nights Of Terror” Open Water 3 Cage Dive (Blu-ray)