Posted in: Disc Reviews by Brent Lorentson on December 21st, 2017 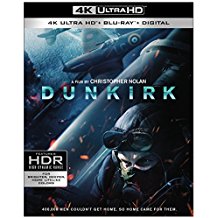 When Christopher Nolan has a new release, it’s an event to get excited about. There are few directors I can say this about. Sure, there are directors that I like, but still there are few who manage to capture what makes going to the cinema an experience. Dunkirk is his latest cinematic opus. Despite it being his shortest film, with the exception of The Following, this is the first time he has shot a film almost entirely in IMAX form. What’s the big deal? Well, aside from the picture being twice the size of the regular format, what he does with these cameras is deliver a beautifully striking picture of destruction and survival.  There’s a lot of buzz going around with this film, and already it’s being looked at as the first real Oscar contender of the year.  Is the film worth the hype?  Is it really Nolan’s best picture?

The film has three stories going on at one time. We have the soldiers who we are following as they are attempting to flee the beach.  We have a father, played by Mark Rylance, who along with his sons uses his yacht to sail to Dunkirk to rescue as many soldiers as they can. Then there is a pilot, played by Tom Hardy, who is one of three pilots who are attempting to provide protection for the ships departing Dunkirk.

Hardy, as the spitfire pilot, is very much another character where we are rooting for him, but it would have been nice to know a little more about him.  Granted his actions throughout the film will have you engaged with his character, but I just wanted a little more.

As for the true spectacle of the film, the massive amount of destruction and constant peril we witness on screen — that is what works here.  The film is simply unrelenting when it comes to the struggle these characters are faced with.  The moment a character escapes one torturous situation they seem to be flung into yet another.  There will be some who may find the experience of the film a bit hard to watch, if not exhausting to endure.  The film clocks in short of two hours, and from start to finish it will have you gripping your seat as you watch, hoping that by some miracle these men will all manage to survive.

Dunkirk is presented in its original two aspect ratios of 1.78:1 and IMAX  2.20.1. That means the aspect ratio will shift throughout. You might expect that to be distracting, but I hardly noticed. I am rather glad that the full cinematic video presentation was preserved. The ultra-high-definition 2160p  image is arrived at by an HEVC codec with an average bitrate of 65-70 mbps. When it comes to 4K discs, it’s a special treat when the source material is not only on film but large-format 70mm film. Christopher Nolan still insists on film, and it shows particularly well in a 4K disc. That’s because the material is actually at a higher resolution that 4K. Colors don’t dominate. This was a cloudy and smoky environment. What works here is just how detailed the large visuals are and how they can immerse you so much with great depth of field. It’s like looking out of a window into the battle. The facial close-ups that Nolan uses so often give you a chance to catch these actors at their best performances. The grit of the sand is so full of texture that you can see grains on the surface. Black levels are a bit hazy as was intended.

The DTS:HD MA 5.1 track delivers, but you have to wonder why this release wasn’t given an Atmos of DTS:X 7.1 audio presentation. Apparently it was at Nolan’s request that the simpler surround format be used. Can’t say I agree with him. This is a very impressive audio presentation, but it’s nothing like it was in the cinema. There are indeed wonderful surrounds as planes bank and fire. The crisp dynamic delivery is wonderful inside the grounded ship while the soldiers are being fired upon. Each hole and pink is startlingly realistic. I can hear Tom Hardy a bit better here than I could in the cinema. The score is huge but manages to stay in its own place. Dialog is clear for the most part (see Hardy issues). The real hero in this film is the sub levels. You can feel the bombs landing on the beaches and on the soldiers on top of the mole.

The extras are all on a dedicated Blu-ray.

Special Features: (1:49:46) Yes, that’s what it’s called. This is a massive behind-the-scenes feature split into five parts with a play-all option. There is plenty of behind-the-scenes footage. The focus here is on the historic authenticity and where it had to be fudged. There’s also a lot on the logistics of using these large-format cameras strapped to planes and taken into tight spaces.

Brent Lorentson is a horror writer and film critic based out of Tampa, Florida. With a BA in Digital Film, he co-wrote and co-directed Scavenger Hunt. His short stories have appeared in various horror anthologies. In 2019 his short script Fertile Blood will be a part of the anthology horror film Slumber Party. He is currently working on his first novel A Dark and Secret Place set to be released in late 2019. Favorite Films: Taxi Driver, Fight Club, I Saw the Devil, The Wild Bunch, Dawn of the Dead, A Clockwork Orange, Pulp Fiction, Heathers, The Monster Squad, and High Fidelity.
Holiday Gift Guide Spotlight: FOX Television on DVD Interstellar (UHD Blu-ray) (4K)