Posted in: Disc Reviews by Michael Durr on February 7th, 2018 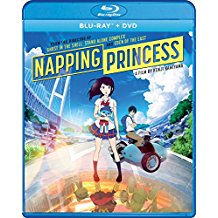 Kenji Kamiyama is a fairly known name in the anime world. His auspicious beginnings had him contributing backgrounds to shows like Duck Tales and movies like Akira. He then contributed scripts to a Wild Arms anime show and also did the screenplay for one of my favorite animes, Blood: The Last Vampire. His really big break occurred when he landed the director chair for the Ghost in the Shell: Stand Alone Complex films. After directing the TV show, Eden of the East, he came up with an idea for a new animated film called Ancien and the Magic Tablet. Unfortunately, that name didn’t really stick and was renamed Napping Princess. Fast forward to 2018, and I have in my hands the Blu-Ray/DVD Combo set from Shout Factory. Let’s check it out.

Once upon a time everybody had the same job. That job was to build machines or in plainer terms, BRAND NEW CARS! The King of Heartland thought this was the key to happiness. If you owned an old motorcycle or last year’s model, you would get docked by your manager until you got the newest car right off the line. But there was a voice of hope and reason in the kingdom that belonged to Princess Ancien.

Princess Ancien had great power. She possessed a magic tablet. With it, she brought life to a stuffed animal fox named Joy to be her companion. The princess also brought life to the machines. They transform into robots and can think for themselves. However, such activities scare the kingdom and her tablet is taken from her. She does eventually find out that the tablet is locked away along with the machine she brought to life in a secure room. Despite her efforts, the princess cannot retrieve the tablet after she trips an alarm. Thankfully, she is able to escape back to her room where she goes to sleep.

Kokone then wakes up from her dream nestled next to Joy (back to being stuffed). Kokone is a fairly ordinary girl in her last day of high school which apparently she is late for. It is also three days before the 2020 Tokyo Olympics. Kokone lives with her father, Momotaro who works as a mechanic. However, he doesn’t always receive payment in Yen and instead gets paid typically in fruits and vegetables. He also isn’t a typical mechanic as he is shown fitting a vehicle to be completely self aware (to aid the elderly). This is done under the radar and to this point, the government is unaware.

Interestingly enough, Kokone and her father really don’t communicate. Well Kokone talks but her father doesn’t respond except later via text message. However, Momotaro does receive a phone call from a lawyer regarding a mysterious tablet. Later on, we see the tragic scene of the mechanic being led away in handcuffs for stolen secrets. That’s when Kokone, searching for answers decides to visit her mom’s grave. There, she finds Joy, the stuffed fox, left by her father earlier prior to arrest. Hidden inside the fox’s padding, Kokone unzips to find the tablet.

The line between dreamland and reality just became a lot more blurry. As you can tell by this point, this is not your typical anime production. There are no bloody demon slayers chopping up bodies limb by limb, there are no silly school girls screaming in joy and making exaggerated facial expressions, heck I don’t even see any giant platters of delicious Japanese food being gobbled quickly. Now I’m hungry, great. No, this is a thoughtful story which includes tragedy and redemption. It never gets overly violent and remains wholesome enough even for young children to enjoy.

But the movie’s greatest strength is also its greatest weakness. The film does move at a pretty slow pace, clocking in fairly close to two hours of run time. If this was a tv series, I would expect the slow pace. But in a film, we are looking for things to fall in place a lot quicker. While I did enjoy the movie overall and will re-watch it with my toddler, he might just fall asleep before the train ride (which would probably be his favorite part). I’m usually the one advocating for longer cuts, but that is not the case.

The film is shown in a 1.85:1 Widescreen picture that is nothing short of breathtaking. Both the Kingdom of Heartland and a present day Japan look great on display. Plenty of color and visually magnificent scenes are on appreciation here. There are plenty of elaborate set pieces and full fledged backgrounds and it should come as no surprise that this is only a step (more like a quarter step) behind such production houses as Pixar and other animation greats. Beautiful film to put on in the background while you are doing other things or entertaining guests (for those who have friends).

Equally impressive is the audio. This features DTS HD 5.1 tracks for Japanese and English (dub) (also included is a DD 5.1 track in French). While purists will always prefer the Japanese track, the English dub is also excellent and quite adequate for the job. Dialog is clear, sitting usually in the center channel, no issues that I heard. Your surround speakers as well as your sub should get plenty of workout as for the action sequences that are full of life. The only thing that hurts it as I mentioned is the slow pacing of the film which causes some quiet moments.

In addition to the audio options, there are three sets of subtitles also available. One English track for the Japanese audio, one English SDH track for the English dub (or those who are hard of hearing) and then one in French. Excellent well done subtitles are always appreciated.

Interview with Kenji Kamiyama 15:02 : The director and writer of the film talks to us about why he wanted to make something different as opposed to most mainstream anime films.

Introduction at Japanese Premiere 20:17 : Prior to the premiere, Kenji and many of the cast members such as Mitsuki Takahata and Shinnosuke Mitsushima introduce themselves before the audience. Blue Bot is also there.

Greeting at Japanese Release 17:51 : Similar to the above segment, this is more interaction with the audience (and more traditional Japanese fare) as the cast members discuss many different subjects. Also, I want a Joy doll, that fox is adorable.

Okayama Scenery 3:24 : For those who are not aware, the scenery in Napping Princess is modeled after the Kurashiki City in Okayama. This shows us some comparison shots.

Special Interview with Cast 7:19 : Mitsuki Takahata, Shinnosuke Mitsushima, and Y?suke Eguchi discuss their characters after watching the complete film for the first time.

Special TV Program 22:04 : This reminds me a lot of the promotional pieces we get on Blu-rays and dvds here in the states, think Access Hollywood types. We have an interviewer and again we are talking to Mitsuki, Shinnosuke, and Y?suke about the film. As a note, there is a lot of redundancy here once you get beyond the Kenji Kamiyama interview and the Scenery bit.

Trailers and TV Spots 3:57: This has the original trailer, teaser, tv spot 1, tv spot 2, and the tv spot for the special version. All of them play out pretty much the same, just different lengths.

Note: A DVD was also provided in the combo package as well as a good-looking slipcover. I would suggest for future releases they consider clear blu-ray cases so we can enjoy the interior art. I will probably be switching my copy in the near future.

Incidentally, the Summer Olympics are set to be held in Tokyo in 2020. While I’m not suggesting the presence of any strange phenomenon at that historic event, one can be sure there will plenty of fine athletic performances and great stories throughout. Napping Princess walks the careful tightrope of blending fantasy with reality. Its a peaceful and wondrous story with great voice acting for the entire production. It’s only negative is the slow pacing that hampers three quarters of the film.

The blu-ray/dvd combo set is a technical masterpiece. The video and audio are top notch and are reference quality for any animation fan. The pieces drip with color and will leave your jaw and ears wide open with the beauty and sound fidelity. The extras are well done for the most part but do suffer from some redundancy in information. It could have been better with some different perspectives from the production or sound crew. All in all, I give this a high recommendation for a film that has great rewatch potential and should delight younger audiences. Enjoy.

Michael Durr has been reviewing movies for the better part of fifteen years now. He primarily enjoys thrillers, sci-fi, animation and even a little courtroom drama. His favorite films include Escape from New York, the Goonies and anything with Alyssa Milano. When he’s not praising Kurt Russell as the greatest actor of our time or scratching his head over a David Lynch flick, he’s spending time at home in Texas with his lovely wife, Lori and his amazing son. How they put up with him is a mystery, but even Basil Rathbone doesn’t have the time to solve that one.
Tuesday Round Up: February 6, 2017 Our Interview With Chris Mark Of Kill Order