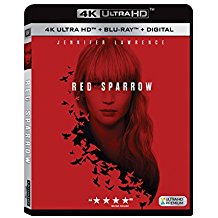 “Don’t give them all of you, Dominika. Hold something back. That is how you will survive.”

There appears to be nothing Jennifer Lawrence can’t do. She is an Oscar winner, the face of a successful movie franchise, and now she is a Russian spy who specializes in seduction techniques. Now in the looks department, there are scores of men that would gladly hand over their social security number for the opportunity to be seduced by J Law, so her casting was a no-brainer. But she went much deeper than that, showing an unparalleled intellect and natural aptitude for the world of espionage.

Based on the popular novel of the same name, Red Sparrow follows Dominika Egorova (Lawrence), a premiere ballerina with a Russian ballet company who suffers a career-ending injury and is forced to reinvent herself. Desperate to provide for her ill mother (Joely Richardson), she is seduced (pun intended) into the spy world. Enter her uncle, Ivan Dimitrevich Egorova (Matthias Schoenaerts, The Drop), a high-ranking Russian intelligence officer who recruits her for what is supposed to be a one-time mission. Deceived by her own family, Dominika learns that the mission was never what she thought, and in order to survive, she must agree to become an intelligence operative herself.

Trained to become a Sparrow — an operative well-versed in seduction techniques — she becomes the ultimate honeypot. She is tasked with getting close to CIA agent Nate Nash (the talented Joel Edgerton), and learning the identity of a mole within Russian intelligence. The stakes are high, and the bullets are real, as Dominika must find a way to outwit everyone on the board in order to ensure not only her survival, but that of her mother.

Red Sparrow is a thriller without question. It’s a tense ride from opening till closing, and I was engaged by the way the story unfolded the entire time. I am not sure how closely the film mirrored the book, but I find myself inclined to run to the nearest bookstore in order to find out. For me, what made the film so great was that it had a plot that I could not predict. Naturally, there were some areas where you could see things coming, but there is some excellent misdirection that occurs throughout the film. It all pays off exceptionally in the final twist. I guarantee when you see the endgame unfold, your jaw will drop, and you will be amazed by the cleverness of the writers. I know I was.

Dominika Egorova is one of the most intriguing characters I have seen in a long time. A very complex individual to say the least. She is the best conduit into this world of secrets and betrayal, because in the beginning she does not appear to possess the same type of attributes as the other characters, but she is highly adaptable. I believe that is what made me gravitate to her: it doesn’t matter the situation she is put in because, before long, she has adapted to it. And not only adapted to it, but found a way to turn it in her favor.

Furthering the film’s success is the interplay between Nate Nash and Dominika Egorova. Their relationship shakes up the normal dynamic between two people who are attempting to get the better of one another and just calls it right out. They are like, “Hey, I know you are a spy, and I know that you are trying to get the best of me.” Seeing that kind of back-and-forth was refreshing, and it allowed for their relationship to unfold in a manner that was authentic and not generic. It also allowed us to see Nate Nash’s intellect, making him more of a two-dimensional character rather than a lovesick puppy.

Red Sparrow is presented in an aspect ratio of 2.40:1. The ultra-high-definition 2160p  image is arrived at by an HEVC codec with an average bitrate of 45-50 mbps. This ultra-high-definition image presentation is filled with contradictions. The colors are, for the most part, rather de-saturated and intentionally dull. But at the same time, flashes of vibrant color manage to pierce through the presentation. You’ll find that particularly true with red, appropriate for this title. The image remains sharp, allowing the carefully-crafted atmosphere to carry throughout the film. Black levels are pretty solid and give us good shadow definition, even if it’s somewhat soft by design. There are some really beautiful establishing shots that show off the locations. Texture can be found throughout but is especially strong with some of the costume fabrics.

The Dolby Atmos presentation defaults to a nice 7.1 track. The audio presentation pulls your attention to the center speakers throughout most of the film. Surrounds are filled with some nice pinpoint things like the dog that barks in the Budapest apartment building. The ballet music dominates the main speakers, allowing surrounds to pick up the subtle audience and footwork sounds. Dialog cuts through well at all times. The subs take over during car chases and firefights.

There is an Audio Commentary with director Francis Lawrence.

A New Cold War – Origination & Adaptation: (12:42) This feature looks at the story itself. There’s a lot of input from the guy who wrote the novel. He was an actual operative for the CIA and had to have the story okayed by the agency. The cast and crew take us through the evolution of the story from novel to screenplay to finished film. There’s some nice behind-the-scenes footage here.

Agents Provocateurs – The Ensemble Cast: (15:21) This look at the cast is pretty much a mutual admiration collection as the cast and crew tell us how wonderful each other was. Of course, most of this love gets directed to Jennifer Lawrence.

Tradecraft – Visual Authenticity: (13:28) This behind-the-scenes feature focuses on the film’s production design. Most of the time is spent on costumes, but there’s a fair bit on cinematography and set design.

Heart Of The Tempest – On Location: (10:56) The film was shot in four countries, and each had specific locations and buildings that helped create the film’s atmosphere. The cast and crew talk about the choices that were made and the logistics involved in filming at some of them.

Welcome To Sparrow School – Ballet & Stunts: (12:12) What do dance and stunts have in common? Of course, both are choreographed, and so it’s a natural fit to have both of them covered in one behind-the-scenes feature.

A Puzzle Of Need – Post-Production: (14:08) Editing and score are the highlights of this final feature.

Red Sparrow is absolutely a worthwhile movie experience. If you enjoy sexy thrillers and espionage films with a twist that you won’t see coming, I urge you to see it. Plus, for those of you obsessed with Jennifer Lawrence, there may be a scene in there that you won’t want to miss. Trust me, you’ll know it when you see it.

Jeremy Butler is a film school graduate of the International Academy of Design and Technology. He is been writing for Upcomingdiscs since 2012; however, movies have played a big part of his life for much longer. Favorite genres include horror, science fiction/fantasy, and comedy. Favorite movies are V for Vendetta, Boondocks Saints, Kiss Kiss Bang Bang, and The Godfather.
Gladiator (UHD Blu-ray) (4K) Die Hard 30th Anniversary (UHD Blu-ray) (4K)