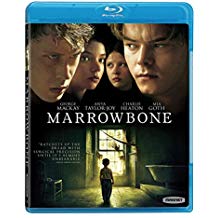 Four young siblings take this vow shortly after arriving in America from Great Britain, having just experienced their latest tragedy. Unfortunately for them, these words are spoken less than 10 minutes into Marrowbone, so you just know their vow is bound to be severely tested. But while the movie looks and sounds like a typical horror flick on the surface — and is even largely set in what seems like a classic haunted house — Marrowbone is much more of a soulful, spooky family drama than it is a bloody good time.

“From now on, our last name will be Marrowbone…just like this house.”

In the late 1960s, Rose (Nicola Harrison) arrives in her formal rural American home with her four children, Jack (George MacKay), Billy (Charlie Heaton), Jane (Mia Goth), and Sam (Matthew Stagg). The family adopts the home’s name — Marrowbone — as its own last name, so it’s clear they’re all seeking a fresh start after some unknown event in Great Britain. Soon after their arrival, Rose falls gravely ill and Jack has to take over as head of the household. Jack promises his mother that he will keep his siblings together and hidden from the rest of the world, at least until he turns 21 and can legally own Marrowbone.

“We have come very far, enduring many hardships. But at last, we’ve found the place where we can be safe…together.”

Of course, there are several complications. One of them is Allie (Anya Taylor-Joy), the friendly and peculiar girl who strikes up a relationship with Jack, much to the chagrin of his more sheltered siblings. There’s also Tom Porter (Kyle Soller), the nosy lawyer in charge of Rose’s estate who becomes suspicious of Jack’s secrecy in regards to his family. (To complicate matters, Tom is also courting Allie.) One more thing: I suppose I should also mention the ghost that is haunting the four siblings in their new home, making spooky noises inside the walls, producing an eerie black spot in the ceiling, and prompting the Marrowbones to cover up all the mirrors in their house.

Marrowbone is an English language Spanish production and the promising feature directorial debut of Sergio G. Sanchez, who also wrote the script. The movie reminds me of 2001’s The Others, another English language ghost story helmed by a Spanish filmmaker that is heavier on mood and atmosphere than it is on cheap jump scares. From the opening scene, Marrowbone asks us to consider questions without explicitly asking them on-screen: Why did this family flee England? Where’s the family patriarch and why is he constantly referred to as a “monster”?

A big part of the reason we care — even during the slower, more meandering stretches of the film’s 110-minute running time — is because Sanchez has assembled an impressive young cast to keep us invested. MacKay is especially strong as the strained lead of this family, and the actor really gets to show his range during the film’s final act. Taylor-Joy (Split), with her distinctive wide-set eyes, has become a fixture in horror/thrillers ever since her breakout work in The Witch. Here, the actress’s otherworldly facial features grant her a mystique that serves her well, since she really doesn’t get to do much until the film’s second half.

Meanwhile, the actors playing Jack siblings each have just one distinct quality: Billy is a hothead, Jane is a worrywart, and Sam is precocious. However, the actors’ performances — particularly Heaton’s pained work as Billy — end up serving the story well and make a good impression. I also enjoyed Soller’s jerky work as Tom, who is actually much more of a threat to the Marrowbone siblings than the ghost for much of the film.

And that actually gets at the biggest strike against Marrowbone: the movie is simply not very scary. Even though there’s a good chance you’ll figure out part of what’s happening here — but probably not everything — the film’s strengths lie in the performances and the story’s deliberate construction.

Marrowbone is presented in an aspect ratio of 2.40:1. The 1080p image is arrived at with an AVC MPEG-4 codec at an average of 32 mbps. Black levels that are inky and finely tuned are especially important in spooky horror flicks, and Marrowbone is no exception. The good news is this Blu-ray release is more than up to the challenge. There’s particularly terrific shadow detail inside the dilapidated house, where the lights are never on even during day time. By contrast, whenever the action ventures outside Marrowbone and into the nearby town, the image is sunny and pleasingly warm. Director Sergio Sanchez and cinematographer Xavi Gimenez used natural light whenever possible, resulting in a striking visual presentation.

The Dolby TrueHD 7.1 track packs a wallop during the intermittent, jump scare-y jolts, but is more effective when it’s cranking out some of the creaky, old house noises in the rear speakers. This is a low-key moody, atmospheric film, so the extra firepower in this seven-speaker presentation often feels like overkill. Even the instances where the subs rumble to accentuate some dread-filled moments come off as a bit much. Of course, I don’t want to ding this track too much for being overqualified: even the dialogue is dynamic and lively, including a scene where Billy’s voice jumps from the front speakers to the rears when we get a new camera angle and he’s talking to Jack off-screen.

Deleted/Extended Scenes: (29:35) There are 11 scenes total, many of which strongly hint at the movie’s big revelation. (So I’m glad they were ultimately cut.) We also get a glimpse at Allie’s home life and an even sweeter coda than the one we got in the theatrical cut.

Marrowbone Behind the Scenes: (29:28) Much of this featurette is in Spanish (with English subtitles), and there’s a lot of deserved praise for Sanchez’s script and his first turn in the director’s chair. There’s also some great camaraderie on display among the young actors, who gave each other nicknames related to different days of the week. The young performers also describe their characters and what attracted them to the project.

Marrowbone Visual Effects Reel (1:48) At first glance, this movie doesn’t appear to be heavy on visual effects, but this reel reveals how additional foliage was added to the background of many scenes. CGI was also used to make Marrowbone (the house) look more weathered and decrepit.

In the “Behind the Scenes” featurette on this disc, Marrowbone is referred to as “a suspense story with romance…and occasional forays into horror.”

It’s really important for audiences to know that going in because expecting a scare-a-thon here is ultimately going to lead to disappointment. Marrowbone is best watched as a drama about the ties that bind family together and how hard it is to shake loose from the (literal?) ghosts of your past.