Posted in: Disc Reviews by Brent Lorentson on September 26th, 2018 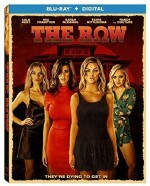 With Halloween just around the corner, it’s that time of the year when the studios start cranking out horror films to fill up the shelves hoping that eager fans will scoop up any new horror titles they can add to their collection. The Row is one of those releases that has the cover with beautiful girls and the tease of murder and mayhem to ensue.  Does it deliver what the cover is attempting to sell? Well, the simple answer is yes, but to call this film horror is the equivalent of calling a toddler’s finger painting art.  This is a film that sadly is a product of the times. Though it has an R rating, the film seems tame, and considering the director claims he was aiming for Spring Breakers meets Friday the 13th, I have to wonder if he saw either of those films.

Riley (Lala Kent) and her best friend Becks (Mia Frampton, yes, Peter Frampton’s daughter) are attending college, and as rush week is occurring they are looking to join the Phi Lambda sorority.  As it turns out Riley’s mom was also a member of the sorority, just one of the many mysteries that seem to shroud her mother’s past, a mother Riley seems to know little about since her mom died when she was seven.  Randy Couture plays Riley’s overprotective father, who is on suspension after a drug bust goes wrong, so to deal with his empty nest syndrome he manages to involve himself with a homicide case involving a student who is killed at Riley’s college.  It just so happens that it seems this killer is just getting started, and there are plenty of pretty sorority girls who can be potential victims.

I’m a sucker for a good slasher film, and when you throw in sorority girl hijinx, well, this is the kind of film that should be a fun late-night movie.  Instead we get something that is neutered.  One of the big things a filmmaker needs to know when making his film is the audience he is making it for.  This had the potential to be a cult classic for teenage boys.  But where’s the blood?  Where is the nudity?  When you’re attempting to make a B-movie sorority horror film that you claim to be inspired by Spring Breakers and Friday the 13th you need to have an edge and feel like you’re making something a little campy and a little dangerous.  There was a moment when the film flirts with it when the pledges are going through some hazing rituals, but everything feels so tame. Seriously, a dildo and a line of cocaine (neither used) is as boundary-pushing as this goes, but there’s no problem with showing them using molly in other scenes?

As for the violence and the gore, really, there is barely any.  Most of it is off screen and just poorly done.  It’s fairly obvious who the killer is, but the problem is once you start thinking about the timeline of events from the past, even during their confession, well, you’ll start to question how much sense any of it makes.

What the film does have going for it is the chemistry between Kent and Frampton. Seeing these girls together is really the genuine thing in this film worth watching.  As the film progresses we see less of them together, and it suffers for it.  Couture is doing the best he can with what he has to work with. It’s a departure from seeing him in UFC and in films just kicking ass, but this role just doesn’t play towards his strengths.

Sadly the best part of the film is after all the credits and in a quick final scene that is kind of a game changer.  Had the film gone this direction and focused on this more, perhaps this could have been a better film, but unfortunately this is what we are stuck with.

The Row is presented in the aspect ratio 1.85:1.  The 1080p image is arrived at with an AVC MPEG-4 codec at an average of 29 mbps.  The look of the film is one of the biggest drawbacks I see with it.  We get a sharp image that is filled with neon colors during the party scenes, and for a lot of the interiors everything seems to be over-lit. The night shots are a bit softer due to the fact that it seems they relied heavily on natural light. If this was a comedy or any other style of film it would be fine, but for a film attempting to be a horror/thriller it doesn’t work. There is nothing about the look of this film that evokes horror. Skin tones look good, though watching this it feels more so like you’re watching a rejected MTV special.  Though there is a lot of color that pops on the screen, reds and greens in particular; what doesn’t look all that great is the blood. This is troublesome considering the genre the film was supposed to be.

The DTS HD-Master Audio 5.1 track is a bit of a mixed bag. Yes, we get clean dialog through the entire film, and the when it comes to the party scenes the music to dialog is balanced well, but like the visuals there is no atmospheric track.  Sound is key when it comes to horror, either creating a great track with ambient sounds to build tension or having an engaging score to let your audience know when something bad is about to occur. Instead this is just a mess of electronic music beds.

Directors Commentary:  This is something I simply had to hear, I wanted the director to explain his motivations for the film. He says he’s a fan of 80’s horror, but he never gets into it. It’s as though he’s simply saying things attempting to be hip.  There are points where he’s too far from the mic and he’s barely audible and even long periods of time where he sounds bored with his own film.

Making The Row: (6:09) Short and collection of interview clips with cast and crew discussing the film with some BTS footage cut together.

I was really hoping for a simple B-movie, but instead we got something worse.  While it’s not the worst film I’ve seen, and it has a beautiful cast, the plot falls flat and just doesn’t deliver.  There are worse things you could watch, but I’d recommend throwing on The House on Sorority Row instead.

Brent Lorentson is a horror writer and film critic based out of Tampa, Florida. With a BA in Digital Film, he co-wrote and co-directed Scavenger Hunt. His short stories have appeared in various horror anthologies. In 2019 his short script Fertile Blood will be a part of the anthology horror film Slumber Party. He is currently working on his first novel A Dark and Secret Place set to be released in late 2019. Favorite Films: Taxi Driver, Fight Club, I Saw the Devil, The Wild Bunch, Dawn of the Dead, A Clockwork Orange, Pulp Fiction, Heathers, The Monster Squad, and High Fidelity.
Tuesday Round Up: September 25, 2017 Solo: A Star Wars Story (Blu-ray)