Posted in: Disc Reviews by Jeremy Butler on July 2nd, 2019 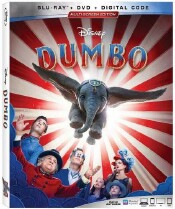 So, Dumbo was never one of my favorite Disney classics. In fact, when news initially broke about a live-action version being filmed, I wasn’t moved one way or the other. I figured I would end up seeing it for the sake of my daughter, but I figured it would just be something that I would have to endure. I speak these words with the full knowledge that I now have to eat them, as Dumbo has gone from one of my least favorite Disney films to one of my favorite movie experiences of the year. With an all-star cast that includes Colin Farrell, Eva Green, Danny DeVito, and Michael Keaton, Dumbo is a fantastical and wholesome family experience that I will be taking my daughter to, but dragging her to it if she puts up a fight. Helmed by Tim Burton, Dumbo is the first of three live-action Disney movies expected this year, with the others being Aladdin and The Lion King. Of those three, I was expecting The Lion King to be the biggest audience draw, but as it stands, Dumbo has set the bar extremely high, and the other two have a lot of work to do if they expect to compete.

In comparison to the animated version, the two films are very different, as the original relied mainly on a cast of speaking animal characters with the exception of Dumbo, which remains a non-speaking role in the future adaptation. The 2019 film features a predominantly human cast, mainly focused on the Farrier family and the Medici circus. Holt Farrier (Farrell) returns home from World War I a war hero who lost a limb. His wife has died of influenza before his return, leaving him to care for their two children, Milly and Joe (Nico Parker and Finley Hobbins respectively). Eager to resume his life as a performer, he learns that his act, which used to headline the circus, has been cancelled, and the circus has fallen on destitute times. In need of a job, he takes the only position available, wrangling the elephants.

Joe struggles with grieving for his wife as well as reconnecting with his kids, specifically Milly, who aspires to a life outside the circus. While caring for the elephants, the family discovers that one of them has given birth. Excitement quickly changes to disappointment upon seeing that the baby elephant has abnormally large ears. Relegated to the clown act, the elephant takes flight using his ears as wings, astonishing the family, the circus, and later the audience, as Dumbo (how the elephant gets its name is kind of funny) becomes the featured attraction of the circus. News about this amazing creature quickly spreads and draws the attention of V.A. Vandevere (Keaton), an entrepreneur with a large theme park, who intends to exploit the animal for his own profit, no matter the cost.

As previously mentioned, this has rapidly become one of my favorite films of the year and quite possibly one of my top Disney films. Not to take anything away from the original, but the utilization of a human cast had great impact on making the film more relatable and enduring. The human cast are literally the voice for the hero and convey his emotions and motivations. In this film, human characters are more focal points, as Dumbo, though central to the plot, is in more of a supporting role. This story concentrates on the importance of the family, which is presented in the form of the reconnection of the Farrier family as well as Dumbo’s. Both plotlines are well balanced and intersect to perfectly push the family narrative.

The film is missing Disney signature music numbers, but they are hardly missed and would have likely not been practical for the film. However, if it would have been possible, I think the song I would have like to have heard would have been “When I See An Elephant Fly” from the original film. Given that the musical number was performed by a cast of birds mocking the idea of Dumbo flying, I understand the decision to go without it.

Comparatively, the stories are different, but I would say that the themes are the same: the connection between Dumbo and his mother, the characters who help Dumbo, and most importantly the source of Dumbo’s confidence: the feather. The film stresses the importance of a scientific method being utilized to help Dumbo’s flying, but it all comes down to that magic feather until the climax, where Farrell speaks and imparts some true wisdom about the source of Dumbo’s power.

Tim Burton is no stranger to working Disney, being one of their most popular directors on their Rolodex. His normal visual flair is a bit restrained in this film with the exception of Dreamland, but it ultimately turns out to be a good thing for the film overall. Here, Burton created great contrast for the destitute state of the circus beforehand, a moderate rebound following the discovery of Dumbo’s flight, and the over-the-top heights that the group reaches at Dreamland. Watching the timeline of events aided the story as it added realism to how DeVito’s and Farrell’s characters could become seduced by their change in lifestyle and their hesitation to do anything to jeopardize it.

Dumbo is presented in an aspect ratio of 1.85:1. The ultra-high-definition 2160p  image is arrived at by an HEVC codec with an impressively constant bitrate of 36 mbps. The number rarely drifts more than a digit or two. The star of the high-definition image presentation is most certainly the computer animated star of the show, Dumbo himself. The animated creation has great texture elements that help sell the illusion. The real magic also happens in the character’s eyes, which comes through quite nicely here. This is a Tim Burton film, so you know how important black levels are going to be. They are pretty much average with enough shadow definition to complete the requisite Burton dark atmosphere when called upon. The colors are a bit muted by the period appearance of the rather warm colors. But during the circus acts there is some pop to DeVito’s red jacket and a few of the costumes.

The DTS-HD Master Audio 7.1 mix does enough of a job to bring you into the circus world of the film. The big tent environments allow an immersive 360 degree sound field that uses the crowd and the background music to fill up the spaces all around you. Danny Elfman’s score is the highlight of this audio presentation and is the dynamic punctuation to all of the key moments and elements in the film. The subs come alive during the scenes of mayhem and in Burton’s Nightmare Island. Dialog is always clear and perfectly placed.

Deleted Scenes: (7:47) There are nine in various stages of f/x completion with a handy play-all option.

Circus Spectaculars: (8:20) Burton introduces us to the cast, and the actors reveal some insight into the characters and their experiences working on the film.

Elephant In The Room: (5:50) See how Dumbo was designed and the various methods used to substitute for him on the stage. Plenty of behind-the-scenes stuff here that show how actors often interacted with a guy in a green elephant suit who would then be replaced by the computer-generated character. You also get some concept art.

Built To Amaze: (7:40) This feature looks at the production design, set construction, and costumes.

Easter Eggs On Parade: (3:32) A guide to the hidden nods to the original animated film.

The special effects are obviously the crown achievement of the film, as they are what bring the titular character to life. From the moment I looked into Dumbo’s blue eyes under all that hay, it was made clear to me that this was a film that I had to make sure that my daughter saw. Or in the words of Keaton’s character, “You’ve made me a child again.” I wholeheartedly agree with that line, as in that moment I was flushed with all kind of childhood nostalgia. Everything seemed possible in that moment, and this is something I am eager to share with my daughter.

Jeremy Butler is a film school graduate of the International Academy of Design and Technology. He is been writing for Upcomingdiscs since 2012; however, movies have played a big part of his life for much longer. Favorite genres include horror, science fiction/fantasy, and comedy. Favorite movies are V for Vendetta, Boondocks Saints, Kiss Kiss Bang Bang, and The Godfather.
Okko’s Inn (Blu-Ray) Pet Sematary (2019) (UHD Blu-ray) (4K)