Posted in: Disc Reviews by Gino Sassani on July 2nd, 2019 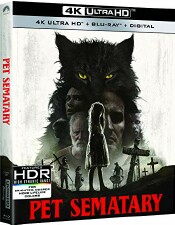 “I don’t wanna be buried in a pet sematary.”

It’s an inescapable fact of life that some things get lost in translation. Italian poetry loses its imagery. War And Peace is apparently much more compelling in Tolstoy’s original Russian. And I’ve been told that Abbott & Costello is painful when told secondhand. You can add to that axiom that Stephen King really doesn’t translate very well on the silver screen. The notable exceptions are films based on non-horror works like The Shawshank Redemption and the barely-horror-related Stand By Me. Both are wonderful films that manage to capture King’s knack for the absurd in everyday life. While some consider Kubrick’s The Shining a classic, you’ll find just as many King fans who hated it, “Here’s Johnny”, and all of that. I’ve read most of Stephen King’s books and a couple of them multiple times. Pet Sematary is one of my favorites, and I’ve read it at least three times. When the 1989 film was released, I was eager to see it. That was a mistake, but an even bigger mistake was made by all involved in what was essentially a mess. I blame Denise Crosby, but then again I blame Denise Crosby for hurricanes and urban blight. I don’t blame Fred Gwynne. He was the only part of that film that reminded me even remotely of the printed word. Now writers Matt Greenberg & Jeff Buhler join directors Kevin Lolsch & Dennis Widmyer in a remake that while not the disaster of the 1989 film still fails to capture the imaginative prose of the novel. I think it’s a translation thing.

The story is essentially the same. The Creed family moves to rural Maine from the hectic big-city life. It’s a wonderful a scenic home… well… except for that small rural road where oil tankers go flying by like bats out of hell. It all starts when little kitty Church is the first to meet a tanker head on. Spoiler alert! Church loses that one. Friendly Neighborhood Jud, this time played by John Lithgow, offers some helpful advice. You see, there’s this ancient pet sematary (yeah, the kids spelled it wrong) where the town’s kids have been burying their Fidos for generations that just so happens to be part of the new Creed family estate. But just beyond said resting place is an extra-special place where buried things come back. Jud just can’t stand to see the Creed kids crying over poor old Church, so he lets slip to Dad Louis (Clarke) about the section with the extra secret sauce. Church comes back from the dead, but he ain’t quite right. He smells funny. His fur is matted. Oh, and there’s the psycho-killer new ‘tude. OK as far as it goes. But you know the rest of the story. One of the young Creed rug rats has one of those tanker meetings, and Louis decides it’s a good idea to try the same thing on said deceased child. It all goes downhill from there.

This version of the film does add some of the supernatural elements from the novel, but not enough to really tell the whole story, and that’s honestly the crux of the problem with both films. Yeah, there was a direct-to-video version, but as our old dog Baby used to say, “I don’t want to talk about that right now.” Baby’s no longer with us, and we don’t quite have access to one of those special-sauce pet semataries ’round these parts. The gang responsible for the new version of this tale are lucky we don’t, because Baby with a psycho-killer bent wouldn’t have been as kind as I am, and that spells O U C H. (see Baby’s reviews to get that last part.) The point is that this story makes no sense unless you get the entire yarn. It’s nobody’s fault, mind you. Without all of those details it’s all rather silly, and that’s exactly what you get with the latest version of Pet Sematary.

The one strength this film has it gives away in the film’s trailers. If you want to get the most out of the twists and turns here, don’t watch the trailer. It spoils the best part of the movie. The cast is, for the most part, better than the 1989 film with the exception of missing Fred Gwynne. Still, John Lithgow puts in a perfectly good version of the character. Jason Clarke and Amy Seimetz are overwhelmingly better than Dale Midkiff and Denise Crosby. Throw in an ultra-creepy Jete Laurence, and this film is a much better bet all around. The pacing is superior, and the miracles of modern f/x make it a better looking film all around. Still, it’s missing something. Call it secret sauce, but I think something got lost in translation.

Pet Sematary is presented in an aspect ratio of 2.39:1. The ultra-high-definition 2160p  image is arrived at by an HEVC codec with an average bitrate of 55-60 mbps. The source material was shot at 2.8K, so this is pretty much an upconvert, particularly when you take that into consideration. If you watch both, you will find that any upgrade over the HD image is in the nuances or details. Colors are somewhat muted, so you won’t get a huge boost from your HDR when it comes to color. Where you will get a nice HDR bump is in contrast. The scene where Judd and Louis are first going to bury the cat the black levels show a pretty sweet increase in shadow definition, taking what is a somewhat muddled image and adding clarity in the dark, but check out the tight beam of the flashlight, which cast a tight slightly green-tinted light wherever it is pointed. This sharp image contrast is what 4K and HDR does best. The film also features close-ups on faces in the night with firelight cast on them. This delivers exactly the effect that was intended, and you won’t get that kind of an image on Blu-ray.

The Atmos track defaults to a rather disappointing 7.1 mix. All of the staple ingredients are fine. The subs add to those punch moments, and the dialog cuts through just fine. The surrounds might as well not even be there. I had to make sure mine were working, because they were pretty much silent throughout. That means some wonderfully immersive moments were completely missed. The fog and voices at the pet sematary were a fantastic opportunity to surround us in an eerie situation, but there is little directional substance, so there isn’t anything terribly good about this audio presentation.

Deleted Scenes: There are seven with no play-all option, so it’s rather cumbersome to watch.

Alternate Ending: (9:16) This is not substantially different from the actual ending except for the final encounter at the pet sematary. Here there’s a significant interaction that doesn’t really change the results.

Night Terrors: There are scenes of three characters facing fear. Basically scenes from the film. There is one each for Louis, Rachel, and Ellie, and no play-all ability.

The Tale Of Timmy Butterman: (3:04) This is an element only mentioned in the film but covered in more detail in King’s novel. John Lithgow, in his Judd character, sits in the woods and tells us the story of the Vietnam soldier who died in the war and was buried in the pet sematary to come back.

Beyond The Deadfall: (1:01:22) This is a three-part behind-the-scenes feature that is split into four sections for royalties reasons. This time a play-all is included so you can watch it all as one feature. Place (cast and story), Road To Sorrow (designing and building the actual pet sematary), Resurrection (working with the cat and stunts/f/x) & Death Comes Home (the lore elements of death and mythology in the story). There’s plenty of behind-the-scenes footage here along with cast and crew input.

Now there is a way to enjoy this film. Forget the book and think more along the lines of the anthology film Creepshow that featured some Stephen King work. It’s coming back as a streaming series, and I hope I get a chance to see it at some point. The ending of this film reminded me more of that campy thriller than the novel I love so much. So, go. Eat some popcorn. Bring a date. And if you get a little bored, bring along a book. I have a recommendation. It is a better book than it’s given credit for. Lately King has been making quite a comeback. The first “chapter” of It was the best King horror film to date, and the second will soon be upon us. Television has been kind to the King lately, and there’s talk of a couple other projects coming down the pike. For some King classics, however, and you had to have see this one coming from a couple of miles away: “Sometimes dead is better.”

Gino Sassani is a member of the Southeastern Film Critic's Association (SEFCA). He is a film and television critic based in Tampa, Florida. He's also the Senior Editor here at Upcomingdiscs. Gino started reviewing films in the early 1990's as a segment of his local television show Focus. He's an award-winning recording artist for Omega Records. Gino is currently working on his 8th album Merchants & Mercenaries. Gino took over Upcomingdiscs Dec 1, 2008. He works out of a home theater he calls The Reel World. Favorite films: The Godfather, The Godfather Part II, The Body Snatcher (Val Lewton film with Karloff and Lugosi, not the pod people film), Unforgiven, Gladiator, The Lion King, Jaws, Son Of Frankenstein, The Good, The Bad And The Ugly, and Monsters, Inc.
Dumbo (2019) (Blu-ray) Upcomingdiscs Interview With Liv Collins: Actress/Co-Writer Deadsight