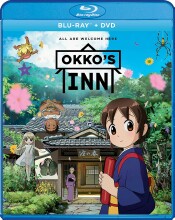 My wife has been a part-time travel agent for roughly the last year or so.  In that time, I have learned much about airlines, cruise ships, and of course hotels.  I have also thanks to her guidance and knowledge been able to stay at a few nice hotels in the past year which were much more comfortable than I could have ever expected.  However, despite my travels with my lovely better half, I seriously doubt I will ever come upon a hotel quite like the one depicted in Okko’s Inn anytime soon.  Let us spend the next few minutes looking at an anime where your lodging is the best part of your trip.

We open to a festival of sorts, called a spa by the locals.  Music is playing; it is time for a show.  We see a couple of people perform traditional dance numbers, while Okko, our main character, watches.  Her father and mother are also on hand to explain the traditions to our young heroine and how they wish they could be part of the show.  The show speaks to the theme and the spirit of “Welcoming Everyone”.

On the way back from the performance, the parents talk about Okko’s grandmother and the inn she runs at the spa.  All of the sudden, another vehicle comes across the highway and right into their car.  The screen goes black.  The next thing we see is Okko on top of another car, unconscious.  She wakes up and looks around.  As she does, she sees a ghost in the shape of a small boy, who fades away as mysteriously as he appeared.

The next thing we know, Okko is leaving her home now that her parents have passed.  She is packed, and she is off for the Hananoyu Spa Station.  Let’s cue the credits please.  Later at her grandmother’s inn, Okko is greeted by a large spider, and then a lizard, and then her grandma.  All arguably equally scary things to the young child.  She gets settled in, and then later at her room she again sees the same ghost she saw at the accident.  Except that now he is picking his nose.

Okko gasps, and the ghost does as well when he realizes that she can see him clearly.  His name is Uribo.  Okko proceeds to scream in fright, and her grandmother comes quickly.  She points out the ghost, but of course the grandmother can’t see what she is talking about.  Soon, Okko finds herself in the position of Junior Innkeeper.  As she learns the trade, she realizes that there are many types of guests at the lodge, and not all of them are alive.  But that only further escalates the burden that Okko must encounter when she meets Matsuki, who is about the same age and runs a rival lodge.

Well, I am not sure I would ever want to run a small inn like the one depicted here.  I suppose we here in the states could compare this to a bed and breakfast, but with a few upgrades.  It’s very difficult but rewarding work for the young Okko, who learns that effort does lead to satisfaction.  The three ghosts (yes, two more show up) help to guide her, but the real character who does the leg work is her fellow student, Matsuki.

Matsuki, who is really the star of the show, serves a dual purpose.  She is the antagonist (not to be confused with a villain, though) of the anime. Also she is the eventual mentor for Okko, as she has gone through a lot of same tribulations with her larger hotel as Okko is now starting to encounter.  The difficulty with this picture is that it is a very slow-moving and slightly boring affair.

This film, despite having apparitions with some tense scenes of the accident and the rather devastating ending, just drags for 80% of the movie.  It’s hard to get excited about a shopping day or preparing a healthy meal that has to be tasty but with very little salt.  As explained above, Matsuki, despite being hurtful at times, is far from villainous, and honestly is written so she can’t elevate Okko’s character as much as needed.

The film is shown in a 1.77:1 widescreen format.  It is a gorgeous piece, and from the outset we realize that this is another beautiful GKids animated picture.  The scenery in and around the inn is beautiful, and everything is finely detailed.  Colors sparkle and every human (or ghost) is done in such a way that nobody could confuse them with somebody else even if they are in the film for a minute or two.  Everything is so inviting and makes the viewer want to visit, curl up, and enjoy their surroundings.

The audio tracks are  DTS HD 5.1 in Japanese and English as well as 5.1 English Descriptive and 5.1 Dolby Digital in French. English (SDH and original), French and Spanish subtitles are provided.  Much like the peaceful scenarios presented to us visually, the music and sound effects provide the same effect.  They are very reserved, very calm, and are there more to put your mind at ease rather than give your speakers any sort of workout.

There are certain effects that do get a little more intense for your surrounds, but these are only used sparingly.  Dialog is very clear, as it should be, and the subtitles did a great job of keeping up with the lip movements as far as I could tell.  I had forgotten the differences with how spa is regarded abroad and our popular translation in the United States, but this helped greatly to inform my misgivings.  Anyhow, the presentation is more than adequate, but do not expect anything more than gentle and serene (with a few nice music cues).

Interview with the Director  4:16:  The director of Okko’s Inn, Kitaro Kosaka, takes us through a short conversation as he talks about the movie.  He talks about adapting the book series to the movie and how twenty volumes could fit into a single film.  The director also speaks about how he crafted Okko’s character and working with the various members of the voice cast.

Interview with Seiran Kabayashi (Okko)  3:39:  Another short one. Seiran knew about the source material beforehand and so was very eager about getting the part to play Okko.  They also go over her approaches to the character and the changes she made between the TV series and her own performance.  It was a lot of fun for her to play, and she really liked the interaction between her and the ghosts.

Q&A at Japanese Premiere  20:52:  The meaty piece of the extras.  Kitaro is joined this time by producers Masahiro Saito and Satoki Toyoda.  This was filmed at the Bucheon International Animation Festival, where they won two awards for special distinction and audience.  They talk about the reaction to the film and the positive feedback they gathered and how certain jokes were received in other countries.   They touch on how they wanted to change the film slightly from what the anime series or the novels were trying to convey.  One of the last bits deals with the dress code at the festival, which seems an odd topic to include.  They finish up with talking about a few tidbits like the hanging scroll and the address of the Inn, basically trivia tidbits if you will.

Trailers 4:43:  US trailer both long form and short are provided as well as the Japanese trailer.  Finally, we finish up with the Japanese teaser to round things out.

The twenty-volume, highly successful novel series has nearly three million copies in print.  The twenty four episode anime series is well regarded by most fans.  However, while I felt the feature film had a lot of merit, its intended audience is liable to be limited to girls under eighteen whocan appreciate the message and plot as it unfolds.  For the average viewer, it is hard to get through and difficult to evaluate beyond the presentation on the screen.

As mentioned, the video is spectacular, and the audio, while understated, delivers well.  The extras minus the Q&A are pretty thin, but do bring the faithful viewers a little closer to the production and how it came to be.  My recommendation is very selective, as I feel that there is an audience who will love the heck out of this film, but it just wasn’t for me.  Those who love very traditional anime, those who are looking for a visual delight, should flock to this film.  However, those who are looking for a deep story with lots of pieces to consume are liable to leave a bit disappointed.  Enjoy.

Michael Durr has been reviewing movies for the better part of fifteen years now. He primarily enjoys thrillers, sci-fi, animation and even a little courtroom drama. His favorite films include Escape from New York, the Goonies and anything with Alyssa Milano. When he’s not praising Kurt Russell as the greatest actor of our time or scratching his head over a David Lynch flick, he’s spending time at home in Texas with his lovely wife, Lori and his amazing son. How they put up with him is a mystery, but even Basil Rathbone doesn’t have the time to solve that one.
Annabelle Comes Home Dumbo (2019) (Blu-ray)