Posted in: Disc Reviews by Archive Authors on November 27th, 2019 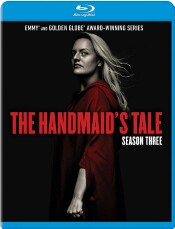 The most amazing thing about The Handmaid’s Tale — other than a powerhouse lead performance from the best actress working in television right now — is that this harrowing, suddenly timely cautionary tale about what happens when society falls asleep at the wheel is based on a story that was published more than 30 years ago. Of course, the show has a lot more going for it than impeccable timing. The Handmaid’s Tale is based on Canadian writer Margaret Atwood’s 1985 novel of the same name. Sometime in the not-so-distant future, the world is in chaos after environmental pollution and sexually transmitted diseases result in a catastrophic decline in human fertility rates. In the U.S., the result was Second Civil War, which led to the establishment of a totalitarian, Christian fundamentalist government known as Gilead. And while life isn’t exactly a picnic for anyone outside of Gilead’s elite ruling class, life is especially dire for women: they are not allowed to own property, work, handle money, or read. Much of this information is revealed in dribs and drabs over what is now three seasons.

The Handmaid’s Tale is created by Bruce Miller, a writer producer who worked on SyFy’s Eureka and The CW’s The 100. The former series offered a cracked-mirror, off-center version of reality, while the latter is a post-apocalyptic drama: both sensibilities proved extremely beneficial for Handmaid’s. A large share of the credit also goes to Reed Morano, who won a directing Emmy for her work on the pilot and established the show’s spellbinding visual tone by helming the first three episodes.

This series is Hulu’s first big prestige television swing, and the streaming service clearly spared no expense. With the help of a 20th Century Fox budget, production values here are top-notch; The Handmaid’s Tale has a dystopian/militaristic vibe that is all the more captivating when you realize most of the prominent characters are women (not the usual protagonists for this sort of story.) It turned out to be an even smarter investment. Now that Disney owns these Fox titles and they now own two-thirds of Hulu, the marriage of these two properties has become an even bigger win. Disney needs to establish an adult outlet for material now that they own those kinds of IP’s, and Hulu is where they will be sending properties like the FX library and R-rated films like the Deadpool franchise. The Handmaid’s Tale fits perfectly into that mold.

Moss became a star thanks to her tremendous work on Mad Men as Peggy Olson; Don Draper was the main character of that classic show, but Peggy was our entry into that world — the series starts during Peggy’s first day on the job — and her character had the most pronounced arc as the world at large changed drastically between 1960 and 1970. In Handmaid’s, Moss gets to play another woman radically out of step with the times. She projects incredible strength, a gallows sense of humor courtesy of June’s cynical internal monologue, and an ocean’s worth of emotion in this performance. (The standout is a scene in the season finale ”Night” when Serena emotionally tortures her.) The result was a loooooooong overdue Best Actress Emmy for Moss.

Fiennes is appropriately oily as Commander Waterford, but it’s Strahovsky’s work as his cruel, conflicted wife that has gone criminally unrecognized. She finally gets the chance to prove it with the third season. Here she gets to assert herself in this world that she herself helped to create. When her “daughter” is smuggled to Canada she becomes a fierce force of nature here and adds tremendously to the narrative.

This season we get to see the “free” world in more detail. We start to follow a group of refugees who have started an organization with the help of the Canadian government to support those still inside of Gilead and that’s where the season truly establishes it’s plots. June isn’t alone anymore. There’s an entire network of “Marthas” that have agreed to help her smuggle out a plane filled with children. It helps that she has found an unlikely ally in the most unusual place. The West Wing’s Bradley Whitford add a wonderful element to the show as George Laurence who was the architect of Gilead. Since that time he’s watched his wife slowly go insane and realizes what a terrible mistake he’s made. He attempts to repent by help run a sort of underground railroad getting people out. When June presents him with her ambitious plan he sees it as a way to save his wife’s sanity and maybe escape the fact that he’s a war criminal. It doesn’t go so well for either Laurence or June as the plot goes down in the season finale. But there is a strong course correction that will keep the show fresh entering year 4.

The Handmaid’s Tale: Season Three is presented in its original aspect ratio of 2.39:1. The 1080p image is arrived at with an AVC MPEG-4 codec at an average of 21 mbps. Like other dystopian stories, The Handmaid’s Tale is characterized by a miserable gray palette; it looks like the nation’s lifeblood and color has been drained out of it here. That being said, there are frequent, conspicuous pops of color, most notably the red that the handmaids are forced to wear. The wives in Gilead are forced to wear blue, which is another color that jumps off the screen whenever the camera focuses on Elisabeth Moss or Alexis Bledel’s piercing blue eyes. Those razor sharp close-ups are even more striking since the background image is often blurred and fuzzy on purpose. Black levels can get a little murky inside the low-lit Waterford home, but that’s really a minor quibble. This fantastic visual presentation from Fox succeeds in transporting the viewers into June’s nightmare.

The DTS-HD Master Audio 5.1 track immediately makes a strong first impression as we are thrust into June’s desperate, ill-fated escape attempt with her family. It’s a chase sequence featuring a speeding car and gunfire in the distance, which gives the rear speakers a nice workout and establishes the strong and dynamic separation on display. That separation goes well beyond “dialog in the front/ambient noise in the rears”; the track takes the time to separate the various parts in Adam Taylor’s score. Yes, this is largely a dialog-driven drama.

Power Play – Gilead’s Women Fight Back: (10:15) This feature takes a look at how June and Sabrina manage to stand for themselves and start taking over control of their own destinies.

As good as this series is, it’s not always easy to binge-watch, which is the only way I stay ahead of the curve here. It carries an extremely heavy cloud of depression and near hopelessness. It’s a depressing show to watch. That’s a credit to how visceral the series is as you watch. You start to really feel the incredibly oppressive nature of the material. There are bright moments, but they do not drive this narrative. You have to really be emotionally prepared before sitting down to a large chunk of this show. “Nobody’s talking about happily ever after. Just after.”

Parts of this review were written by JC and Gino Sassani