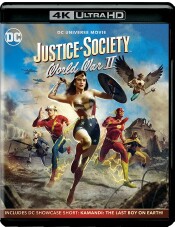 It started in 2013 with Justice League: The Flashpoint Paradox. DC decided to follow the Marvel MCU model and release a series of DC property films in a 16-film phase that ended last year with Justice League Dark: Apokolips War. After 16 films with a couple of branch-offs, that phase/story has come to a close, and a new phase begins with Justice Society: World War II. The stories were pretty much based on the New 52 reboot of the DC comics universe. There have been some exceptional films in the series and a couple of duds. The animation styles varied and conformed to the type of story being told. With the release of Justice Society: World War II we enter a new phase, and so far the theme or source of the new films hasn’t been revealed. We know the next two films will be based on the Batman: The Long Halloween comic. After that it appears the DC folks’ lips are sealed. While that two-part adventure looks quite enticing, the new series of films opens with a very average entry.

The film begins with President Franklin D. Roosevelt being briefed on a secret Nazi project. This is going to tempt you to fetch your Indiana Jones fedora and whip. You see, this secret Nazi project has Hitler sending teams out to look for “magical” or supernatural objects to help him win World War II. The film presentation gives us an idea of the kinds of artifacts the project is seeking, including… wait for it … the Ark of the Covenant and the Holy Grail. No sign of Harrison Ford. FDR is also briefed on a special project the Allies are running. It’s a group of superheroes who have been gathered to fight for the Allies. The group is led by Wonder Woman, voiced by Law & Order: SVU’s Stana Katic with a rather humorous Russian accent. The team also includes Hawkman, voiced by Omid Abtahi, Hourman, voiced by Matthew Mercer, Jay Garrick’s Flash, voiced by Armen Taylor, Black Canary, voiced by Elysia Rotaru, and Wonder Woman’s main squeeze, Steve Trevor, voiced by Chris Diamantopoulos. We get to see them kick a little Nazi behind before we jump to the present where Barry Allan’s Flash, voiced by Matt Bomer is helping Superman, voiced by Darren Criss, beat up on Brainiac, voiced by Darin De Paul. This is all pre-Justice League, and they go out of their way to let you know that this team-up is really something new. Barry tries to protect Superman from a Kryptonite projectile when he is suddenly thrown back in time and ends up on a World War II battlefield.

Of course, he’s confused, and the 1940’s Justice Society don’t trust him at first. He ends up proving that he’s not a Nazi version of themselves, and that he’s from the future. There’s a lot of talk about Barry not getting too involved so as not to mess up the timeline. The adventure takes care of the Nazi bad guys and the team finding a way to send Barry home. The real purpose of this film is to introduce the concept of the Speed Force into the new run of films. That’s how Barry gets to World War II and back in time to save Superman seconds later. They also discover that while Barry is back in the 1940’s, both he and Jay have diminished power as they are both pulling from the same force. Obviously, they are setting up the new Justice League as Barry is inspired by his encounter with the Justice Society to form the same kind of group in the future. In case you hadn’t picked up on that part, don’t worry. Barry will tell you so.

The film also introduces us to other heroes of the 1940’s .Aquaman. voiced by Liam McIntyre. is being controlled by an evil guy to support the Nazi side. and our heroes take a side trip to Atlantis to hash all of that out. We get a quick look at Dr. Fate, voiced by Keith Ferguson, who appears to be the power behind the film. So there is a lot being set up here, and that’s one of my biggest complaints about the film. It plays out too much like a setup and doesn’t quite deliver the goods. There are too many characters and elements that often feel a bit forced into the plot. I get that that is part of the purpose of the film, but it needed to stand on its own without us waiting maybe a year until it all pays off.

Another complaint is the animation style. There’s an obvious attempt to reproduce the feel of those 1940’s cartoons, and I get why. Here’s the problem. It’s done using too-obvious modern techniques, and the styles clash … badly. Animation styles will likely change during this new run of films, and likely some will be really good and interesting, while others will be not so much. It’s what happened in the first phase. I suspect the pattern will be repeated.

Justice Society: World War II is presented in its original aspect ratio of 1.78:1. The ultra-high -efinition image presentation is arrived at with an HEVC codec at an average of 50 mbps. The HDR colors and contrast benefits are going to be muted here by very dull colors. That’s intentional, of course, because of the material. It’s a bit of a mixed bag here. The animation, again by design, is often broken up and not consistent in its ability to deliver any kind of great detail. There are moments where the detail does cut through, and of course the colors pop during the brief footage that occurs in the present time. Then colors pop with wonderful blues and reds. I won’t deny that it was harder for me to evaluate the extended elements of the ultra-high-definition presentation because I was too often distracted by the animation itself. Black levels are also murky, and there’s very little in the way of high contrast or shadow definition. The underwater scenes are really hard for me to enjoy.

The DTS-HD Master Audio 5.1 track is mostly average and serviceable to the dialog. Music cues are somewhat muted, and there isn’t a lot of sub material here to feel the action. The surrounds come alive during some of the battles with Nazis, and the monster battle at the climax is the most sonically exciting moment in the film. Surrounds also provide a rather nifty effect when either Flash is using their speed powers. There’s an electricity to those moments that become the most immersive moments in the film. Not sure why they don’t always include an Atmos track on the UHD instead of pretty much including the Blu-ray mix.

All Extras are on the Blu-ray copy of the film.

DC Showcase Short – Kamandi: (18:03) This little film takes us back to a 1970’s Jack Kirby creation. It looks and feels a lot like a 70’s cartoon, and I grew up on that stuff. It’s kind of an origin story and hints rather strongly that there is more to come.

Adventures In Storytelling – Justice Society: World War II: (30:04) This is a round-table-like discussion with the writers and production crew on the film. I like that it’s quite casual and candid, and you feel like a fly on the wall while they sit around and talk about the film. They laugh a lot and show a lot of passion for the film.

Sneak Peek At The Next DC Universe Movie – Batman: The Long Halloween Part One: (10’29) Now this one looks really good. I’m encouraged that they are spreading it out over two films. As much as I hate waiting for a story to conclude, I think it’s the right choice here. I’ve actually recently read the comic storyline and couldn’t be more excited about this one.

I am really surprised that there hasn’t been as much buzz about the animated universe reboot. They don’t really go into it on any of thew features, and it took some research to find out what I do know. It’s possible they are leaving themselves open to the ability to have these future films not connect. Whatever they do, you and I both know we’re going to be there to check them out. “Resistance is illogical.”

Gino Sassani is a member of the Southeastern Film Critic's Association (SEFCA). He is a film and television critic based in Tampa, Florida. He's also the Senior Editor here at Upcomingdiscs. Gino started reviewing films in the early 1990's as a segment of his local television show Focus. He's an award-winning recording artist for Omega Records. Gino is currently working on his 8th album Merchants & Mercenaries. Gino took over Upcomingdiscs Dec 1, 2008. He works out of a home theater he calls The Reel World. Favorite films: The Godfather, The Godfather Part II, The Body Snatcher (Val Lewton film with Karloff and Lugosi, not the pod people film), Unforgiven, Gladiator, The Lion King, Jaws, Son Of Frankenstein, The Good, The Bad And The Ugly, and Monsters, Inc.
Spiral: from The Book of Saw The Alienist: Angel of Darkness