Posted in: Disc Reviews by Brent Lorentson on July 26th, 2021 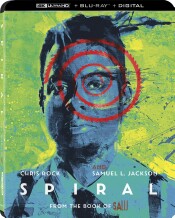 Just when you thought the Saw franchise had finally claimed its final victim in Jigsaw, Lionsgate has decided to keep the gruesome franchise going with Spiral.  I know it seemed like the character of Jigsaw had finally been milked (or bled) for all its worth; what more can they do with this franchise?  Honestly, when I first heard about this film, I groaned. I love horror, and I love gore, but even I was feeling the franchise had gotten a bit stale. As it turns out, there does seem to be more story to be juiced from this franchise, and I’ll say it right now, this film was the game changer the franchise needed, and it helps pave the way for plenty of pain, revenge, and justice down the road. This is a film that was long overdue to the franchise, and I’ll go so far as to say it’s perhaps my favorite film of the series since the release of the first film.

Even if you’ve never seen a Saw film before, Spiral works well as a standalone film. It’s not as though the previous films were serious think pieces, but of course if you’ve seen the previous films it will only add more to the experience. That being said, Spiral does take a different approach and plays out more like a police procedural film. If you’ve ever seen the 1995 film Seven, you’ll most likely catch many of the films homages to David Fincher’s classic. Seeing the film play out more as a crime thriller definitely opens the scope of the film, but to a degree I feel it steps up the film’s pedigree, no longer being a relatively small scale “torture porn”. Now it’s as though the franchise has matured, wanting to give the audience more than just some gore on the wall. Then there is the casting of Chris Rock and Samuel L. Jackson, two names I’m pretty sure no one would have expected to see in this franchise, but most surprising is just how good Chris Rock is in this film.  It’s been a while since Chris Rock has been a name that one would call a box office draw, but this is the role that is going to change that (especially when you factor in his performance in Fargo last year). We get to see a lot of range from Rock in this role, and it makes sense why he made himself Executive Producer on the film.

So what’s the film actually about?  Quite a bit of time has passed since the last Jigsaw murders  occurred, and when a cop killed in a subway tunnel under suspicious circumstances, the homicide department is given reason to believe they have a copycat killer on their hands. Detective Zeke Banks (Rock) is taking lead on the case with his rookie partner William Schenk (Max Minghella). No one wants to work with Zeke, mostly because everyone in the department views him as a “snitch” despite his father being the previous Chief of Police, played by Samuel L. Jackson.  When another cop is found dead, it’s believed that the killer is targeting dirty cops, and as far as Zeke can tell that pretty much puts a target on everyone’s back. With the film’s killer focusing in on dirty cops and the attention in the media over the past year with BLM, I feel the film’s delayed release was a sort of a blessing, because it could have been vilified for its content, though I still feel the film will get a lot of attention for this. That being said, I don’t feel the film has any political agenda; it’s just simple coincidence.

Moving on to the gore and violence, yes, even though the film takes a different approach, there is still plenty of gore and stomach-churning moments. This, like the other Saw films, is not for the squeamish.  The contraptions are over-the-top and cruel weapons of pain just like in the previous entries and at times had me wondering where a character would go to learn to create these devices. Perhaps a DIY video on YouTube?  The makeup FX are what audiences have come to expect. The less-is-more approach has never really been the route the franchise has gone; instead they have tried to be as unflinching and in-your-face as the censors will allow.H

Director Darren Lynn Bousman returns to the franchise after directing Saw 2, 3, and 4. He returns to the franchise with more experience and in my opinion his best work to date (Repo! The Genetic Opera has been a long time favorite of mine). Visually this is the best looking of the films in the franchise, and the pacing of the film is very good, almost to the point where when I realized the film was about to end I felt a little cheated. I wasn’t ready for it to end; I wanted more. The film clocks in at 93 minutes, basically your typical length for a horror film, but part of me wonders if there is a longer cut out there and if that extra time was able to allow the film to breathe a little. I just wonder because there are certain plot points I feel were cut down or not explored, and it could have made this good film a great film.  I won’t get into spoiler territory, but there are some misdirection edits in the film that bothered me as well; for instance we see a character go into a building without any context, and this character disappears for a while, not to reappear till 30 minutes later.  The film plays with its timeline with some flashbacks ,and while most of them work, it does seem a little overdone.

I went into this film with low expectations, and I walked away excited about the franchise and its potential for future films. I had more fun with this film than I expected and cringed more than I have in a mainstream film in a while, and I couldn’t ask for more from a movie. But what will stick with me most is how much I enjoyed seeing Chris Rock in this role,. I’m not saying let’s give him an Oscar, but I hope this gets him more projects down the road. Typically the Saw films are known to come out in October for the Halloween crowds, but Spiral genuinely is a fun summer film that I wouldn’t be surprised if it turns out to be another post-pandemic box office hit.

Spiral is presented in its original aspect ratio of 2.39:1. The ultra-high-definition image presentation is arrived at with an HEVC codec at an outstanding average of 80 mbps and peaking at over 125mbps. Everything about this ultra-high-definition image presentation rests on black levels, contrast, and shadow definition. Everything happens in the shadows, so bright colors and glossy light just isn’t happening here. It helps that a native 4K intermediate was used here, so you’re getting everything out of the 4K there is to get. That’s going to be enough to bring out both necessary textures and shadow definition in the dark. The texture is great with these elaborate traps that look kind of rusty and jury-rigged. Belts that drive the cogs are completely full of detail here. Certainly there are still elements lost to the shadows, but all of that is part of the intent here.

The Atmos track defaults to a really solid 7.1 mix. The surrounds are going to be evident from the start, as the opening scene takes place in a carnival, and all of those sounds just pull you into the environment here. You can almost smell the popcorn and cotton candy. The trap locations tend to be cavernous places with concrete walls, and the audio presentation stays true to those locations. That means a lot of reverb helped by the surrounds to give you a feeling of being in those echoing spaces. Dialog cuts through just fine. The score kind of disappears into the film, which is exactly as it should be.

The Consequences of Your Actions: Creating Spiral (59:05)  This is a 5-part  series that you can hit Play All wit. It is filled with information about the making of the film and BTS footage along with interviews with the cast.

Drawing inspiration: Illustrated Trap Breakdowns: (8:45) This is a pretty cool feature that has the director breaking down shots and effects from the film.

Decoding the Marketing Spiral: (6:12) I really enjoyed this feature where they discuss the unique marketing campaign of the Saw films as compared to Spiral.

With a second viewing I still had fun with the film and could appreciate the clues that lead up to the film’s ending. This is definitely toned down from the other Saw films, but it definitely shares the same spirit.  If you haven’t seen the Saw films you can dive into this film and not really miss out on anything.

Brent Lorentson is a horror writer and film critic based out of Tampa, Florida. With a BA in Digital Film, he co-wrote and co-directed Scavenger Hunt. His short stories have appeared in various horror anthologies. In 2019 his short script Fertile Blood will be a part of the anthology horror film Slumber Party. He is currently working on his first novel A Dark and Secret Place set to be released in late 2019. Favorite Films: Taxi Driver, Fight Club, I Saw the Devil, The Wild Bunch, Dawn of the Dead, A Clockwork Orange, Pulp Fiction, Heathers, The Monster Squad, and High Fidelity.
Pennyworth: The Complete 2nd Season (Blu-ray) Star Trek Discovery – Season 3 (Blu-ray)