Posted in: Disc Reviews by Gino Sassani on October 28th, 2021 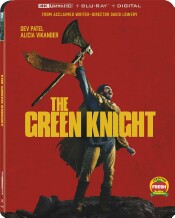 “Look. See a world that holds more wonders than any since the Earth was born. And of all who reigned o’er, none had more renown like the boy who pulled the sword from the stone. But this is not that king, nor is this his song. Let me tell you instead a new tale. I’ll lay it down as I’ve heard it told. Its letters set, its history pressed, of an adventure brave and bold. Forever set in heart, in stone like all great myths of old …”

Mythology is filled with stories of knights. The Black Knights of villainy can be found in thousands of stories, perhaps far more. What young girl doesn’t dream of her White Knight coming to rescue her from a mundane life? And there are countless stories of King Arthur and his entourage of famous names like Guinevere, Galahad, and Merlin the wizard. But you won’t find too many stories of a Green Knight. Nor has there been much set to paper on Sir Gawain, one of Arthur’s lesser known family members. Turns out the young lad was his nephew of Gwen’s side of the family. So it’s no surprise that I had never heard of either character even though I spent a considerable time in my youth devouring Arthur legends and myths. So I considered myself somewhat learned on the subject, enough to complain constantly when films depict the sword in the stone as Excalibur. It wasn’t. The iconic sword was given to Arthur much later by The Lady Of The Lake. But I digress. As the above quote informs us, this is not THAT story. This one comes mostly from an anonymous poem called Sir Gawain And The Green Knight as retold here by writer/director David Lowery.

As we meet Sir Gawain, played by Dev Patel, he is a bit of a cad and a drunkard. Whether in the bed of a prostitute or slumped over his ale in a bar, he isn’t what you would call Knights Of The Round Table material. But he is the nephew of Arthur (Harris), and because of that connection he has been invited to dine at Christmas at Arthur’s side at The Round Table. Arthur feels a bit like he hasn’t given the lad enough attention and perhaps feels guilty that Gawain has become such a lowly figure. That Yule night a message is sent as a prelude to  a visit by The Green Knight (Ineson), who looks a bit too much like Groot from The Guardians Of The Galaxy. The message explains that The Green Knight would like to play a little Christmas game if someone in Arthur’s Court would agree to engage him. The idea is that the challenger can take any thrust at the stranger and in one year’s time must travel to the knight’s Green Chapel to receive the equal to said blow in return. Gawain steps forward and beheads the intruder, much to the applause of those gathered. But a year passes quickly, and soon it’s time for Gawain to make his journey and receive his like.

Gawain sets out on his journey. He encounters a band of young thieves who take his horse and most of his provisions leaving him to die tied deep in the forest. But Gawain escapes his bonds and continues on foot. At a house along the way he encounters a woman who happens to be searching for her head. Of course, this ghostly apparition has her head, which Gawain finds confusing. Still he completes the task and is then accompanied by a red fox from that point forward. We’re somewhat led to believe the departed woman’s spirit might be within the fox, as he later warns Gawain to abandon his quest and that no one need hear of his cowardice. To his credit, Gawain continues on where he meets a Lord (Edgerton) and his Lady (Vikander) who offer their castle as a place of respite before he continues to his destiny. From there he encounters giants migrating to who knows where and finally encounters The Green Knight once again to meet his fate. The ending delivers an odd 30 minutes with no dialog, which is rather clever unless you’ve seen or read An Occurrence At Owl Creek Bridge.

The film is quite stylish. There are “chapter” headings that resemble old font styles. There’s also a lot for the viewer here to decide what might be real or not. The film invites you to draw your own conclusions, which I found more refreshing than I expected. But a lot of this really has to rest on the performance of Dev Patel. There is so little dialog here, and the characters are intentionally generic with only vague names like Lord or Lady. So the burden rests quite heavily on Patel. For the most part he pulls it off. He is able to hold our attention through quite a bit of oddness that surrounds the film. My only complaint is that the story changes him, as these stories are intended to point out, but I never see the different person except what’s in the script. There’s no Al Pacino moment like there is in The Godfather. You know instantly the moment his worldview changes. His speech is different; his stride changes. The way he carries himself is so radically changed that it’s a high dramatic moment as it’s intended to be. I didn’t get that from Patel’s otherwise impressive performance, and I think the ending falls flat for me because of that one element.

The cinematography is actually rather complex. It’s a mystical environment, and Lowrey takes advantage of camera angles, mist, and color correction to create this just so off-kilter world. The Ireland environments add some extra production value here, to be sure.

The Green Knight is presented in its original aspect ratio of 1.85:1. The ultra-high-definition image presentation is arrived at with an HEVC codec at an average of 70 mbps. While digital the film comes from a 4K digital intermediary, and it shows here. There’s a lot of style going on here, so things aren’t going to necessarily look natural. Lots of fog and mist makes the colors a bit muted and often heavily saturated into darker gradients. So much of the early part of the film happens at night or in very dimly lit rooms. Shadow definition is above average, but the choice to stick with just source candles means that a lot of the image is muddled in the darkness. This is a style choice, to be sure, but that doesn’t make it any easier to watch. The use of odd color correction and mist is kept compelling by the wonderful contrast of the HDR. This film doesn’t look like anything you’ve seen before. Sometimes that’s very interesting. Sometimes it’s very annoying.

The Atmos track defaults to a really solid 7.1 mix. This film is just as stylish and unusual in the audio presentation. There is certainly an other-worldliness going on here, but the surrounds make it very atmospheric. I think it works with much more constancy here than in the image presentation. The surrounds are immersive without being overt. There’s a ton of nuance here that underscores the work done here on the audio production. Even dialog is often somewhat corrected for an odd effect. There is a dreamy quality that certainly fits the material. Like the image, this sounds like nothing you’ve heard before.

All of the extras are found on both discs.

Boldest Of Blood & Wildest Of Heart – The Making Of The Green Knight: (35:23) The feature is mostly directed by Lowrey’s insights into the story and style. The cast and crew all offer their own thoughts, and there is plenty of behind-th- scenes footage here.

Practitioners Of Magic – Visual Effects: (14:39) Two of the f/x supervisors take us through some of the moments in the film that they each worked on. We get to see conceptual material and plate shots and often the layers that go into the final shot.

Illuminating Technique – Title Design: (7:53) Terry Blanks designed all of those “chapter” graphics, and we get to see various versions of them as he takes us on a tour of his process.

A poem is a rather difficult thing to film. There is so much emphasis on certain words and meter that it doesn’t really translate well to the theatre. I have to say this one likely catches the technique about as well as I’ve seen, and it remains engaging enough throughout. Sometimes style takes over for substance and there are moments Lowrey is clearly indulging himself. But for much of the film Patel is compelling enough for you to care what happens to him. When I look at characters like this, “I see legends.”

Gino Sassani is a member of the Southeastern Film Critic's Association (SEFCA). He is a film and television critic based in Tampa, Florida. He's also the Senior Editor here at Upcomingdiscs. Gino started reviewing films in the early 1990's as a segment of his local television show Focus. He's an award-winning recording artist for Omega Records. Gino is currently working on his 8th album Merchants & Mercenaries. Gino took over Upcomingdiscs Dec 1, 2008. He works out of a home theater he calls The Reel World. Favorite films: The Godfather, The Godfather Part II, The Body Snatcher (Val Lewton film with Karloff and Lugosi, not the pod people film), Unforgiven, Gladiator, The Lion King, Jaws, Son Of Frankenstein, The Good, The Bad And The Ugly, and Monsters, Inc.
Injustice (UHD Blu-ray) (4K) Independent Film Round Up October 2021