Posted in: Disc Reviews by Jeremy Butler on October 28th, 2021 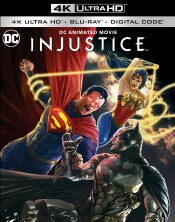 “How many people? Husbands, wives, and children, will you kill for peace, Clark?”

Needless to say, when Superman goes bad, it’s a bloodbath. And not just civilians, but heroes as well, as the Justice League is divided, and several are killed in what becomes a civil war between Superman and Batman. When the Joker tricks him into murdering the love of his life, Superman breaks his most solemn vow in pursuit of what he believes to be justice, and this act sends shockwaves throughout the world. Batman, Superman’s most trusted ally, finds himself in the impossible position of having to stand oppose the hero, as Superman proceeds to impose his will on mankind in order to keep them safe. All in the name of justice, or is it Injustice? This 43rd installment in the DC Animated Universe is based on the popular video the popular 2013 video game of the same name, which takes place in a separate continuity from the main DC Universe. Justin Hartley takes quite a step up in his return to the world of DC movies, going from portraying Green Arrow in television series Smallville to voicing Superman for this animated film. He is in good company, as he is joined by Anson Mount, voicing Batman, as well as Edwin Hodge, Oliver Hudson, Gillian Jacobs, and Anika Noni Rose.

After Justice League Apokolips War, I expected that the animated arm of the DC Universe would be grasping at straws to tell a quality story. That’s not a criticism, as I’ve long believed that the DC Animated Universe does a better job of maintaining continuity between films than the DC Extended Universe. With addition of Injustice, that makes six movies that have succeeded Justice League Apokolips War, the bulk of them following Dark Knight characters. Of all of those that followed, this is the best without question. This one had a real story to tell. There were themes that were easily relatable despite the fantastical circumstance of flying aliens and lightning-quick men. The theme is morality, specifically the dangers associated with becoming the enemy when you act as the enemy does. This is the rabbit hole that Superman goes down after killing the Joker in brutal fashion.

To be fair, the Joker is without question the most morally bankrupt character in DC’s rogue’s gallery, so it is difficult to muster up sympathy for his demise. However, the key aspect of this is the toll that it takes on Superman, and more specifically his relationship with his Justice League counterpart, Batman. Prior to the violent act, Batman had been sure of Superman’s character. Sure that his friend would not falter in his convictions. Afterwards, Batman is torn. He wants to be there for his friend, but he also recognizes the dark path that he is going down, and it is a path that he himself has always resisted. Things comes to a head when Superman declares his intent to impose a totalitarian regime designed to protect humanity from themselves, that’s when their relationship is irreparably damaged, as the Justice League is forced to choose sides between their co-leaders.

The manner in which the film balances the argument for both sides was masterfully done in my opinion. Morally speaking, I could see both sides of the argument. On the one hand (Superman’s view), despite years of trying to guide humanity and protect them from evil; evil does appear to be winning, as evildoers continue to thrive. Then there is Batman’s view: they do not have the right to act as judge, jury, and executioner. If they do, where do they draw the line? The person who sums this argument up best ironically wasn’t Batman, but Mr. Terrific, who attempts to reason with the Man the Steel while besting him in chess. Hands down my favorite scene of the film.

Injustice is presented in its original aspect ratio of 1.78:1. The ultra-high-definition image presentation is arrived at with an HEVC codec at an average of 70 mbps. The jump to 4K here isn’t all that much different. The best use of the HDR isn’t so much in the colors, which are a slight bit more vivid. The real bump comes in the many dark scenes ,where the advanced contrast and black levels give you a much cleaner image with some rather important hedge in shadow definition. The animation lines are very clean here and provide flawlessly smooth motion. You have to understand that this is not a native 4K image. It’s upscaled from a 2K source and digital intermediate, so that would account for the minimal improvements here. Still, they are not insignificant, and this is the better choice, particularly when it comes with the Blu-ray copy for just a couple of bucks more.

The DTS-HD Master Audio 5.1 track is identical to the Blu-ray copy. With that said, there’s a little more room in the bandwidth, and the film does deliver some really nice subs. It’s a situational thing, but I can hear when my powered sub comes awake and delivers impressive fullness for an animated feature. Dialog cuts throw most of the time, but to be honest, I needed subtitles a few times because something wasn’t necessarily that clear. It wasn’t that other sounds were drowning them out; it’s that some of the voice acting delivery was a bit muddled. The surrounds do open up a bit during battles and especially during Superman and Wonder Woman’s flight scenes. There’s a rather nice immersive swish there that I found quite pleasing. The score is dynamic and smooth, if at times a little overbearing.

The extras are only on the Blu-ray copy of the film:

Adventures in Storytelling – Injustice: Crisis and Conflict (30:55): Your all encompassing behind the scenes featurette that tells the origins of this latest film from the director and producer. I thoroughly enjoyed this, and I expected many others will, as it is chock-full of all the details you want to know.

A Preview of Reign of the Superman (02:48): A sneak peak into another DC Animated film. I didn’t get much out of this sneak peak given that the featured film was released two years before this one, and I’d already seen it.

While the end is a bit hokey, the film goes along a good pace, delivering quite a bit storytelling for a film that is less than ninety minutes. Impressive, actually; there is a lot packed into the film. Several different perspectives that adequately feed into the story as a whole. I wasn’t really a fan of the Nightwing story line, which is a bummer given that he is among my favorite DC characters. Another thing I hadn’t expected for a film with this intensity were the moments of levity. There weren’t a lot of them, and I credit most of them to the quick-wittedness of Nightwing (ironic given I just said I wasn’t a fan of his storyline, but my dislike came later when they attempted to combine his backstory with that of another DC character), but they were appreciated all the same.

Jeremy Butler is a film school graduate of the International Academy of Design and Technology. He is been writing for Upcomingdiscs since 2012; however, movies have played a big part of his life for much longer. Favorite genres include horror, science fiction/fantasy, and comedy. Favorite movies are V for Vendetta, Boondocks Saints, Kiss Kiss Bang Bang, and The Godfather.
Superman & Lois: The Complete First Season (Blu-ray) The Green Knight (UHD Blu-ray) (4K)