Posted in: Disc Reviews by Brent Lorentson on May 18th, 2017 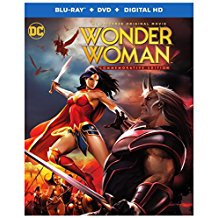 With its original release in 2009, DC and Warner Bros have set up the release of Wonder Woman the animated film to help ramp up excitement for the live-action release of the new Wonder Woman film that is set to hit the big screen in a matter of weeks. For some of those readers who may think animated film means it’s just for kids, what WB and DC have done together with the animation department I wish managed to translate to their live-action releases. The DC/WB animated films in my opinion are phenomenal and honestly have set a high bar for me, because these translations have just been superior to the live-action films, and most come in short of the 90-minute mark.  Wonder Woman follows in line with the previous successful animated films, and I had a blast with this title; it’s the kind of film as a kid I would have loved to see on the big screen, and it’s something adults and parents I feel will also join in on the fun.

This is an origin tale (don’t roll your eyes just yet), but everyone involved knows their audience and that they can’t waste too much time on backstory.  The film opens up with the Amazons at war with Ares, the God of War, and all his minions. This introduction to Ares and just how powerful a force he is reminded me of LOTR: Fellowship of the Ring when we see Sauron just decimate the humans in battle. There is a moment when the Amazons have defeated Ares, and before they can kill him Zeus steps in to save his son. To spare his son’s life, Zeus makes Ares a prisoner of the Amazons where he is expected be held in their care for eternity.

Hippolyta (voiced by Virginia Madsen) takes charge of an island, one that is hidden from the rest of the world and is run by all women, and as a gift from the gods she is given a child, brought to life after being molded from clay, and this is Princess Diana (voiced by Keri Russell). For me the influence of Greek mythology is something I love about the character of Wonder Woman, and the use of the gods in this film is effective in not having me wish to see so much more added to the mix.

When Steve Trevor (Nathan Fillion) ends up crashing his plane on the island that is the home to the Amazon women, this is not only Diana’s first interaction with a man, but she wants the responsibility of being his escort back to his home.  Granted, the interactions with Diana and Steve are a bit heavy-handed with their feminist message, but that is an important part of what makes Princess Diana such an influential figure for young girls and women alike.

It takes a while before we finally see Diana wear the Wonder Woman costume, but the wait is worth it, because the reveal comes along as we are seeing her character develop into this new figure. The major conflict that Diana is faced with is that Ares has escaped from the island and is once again ready to start another war.

The battles throughout the film are beautifully drawn and choreographed. There is so much going on in some of these battle scenes that you can quickly see why this has a  PG-13 rating.  The story over all is straightforward and doesn’t seem to linger that much, though a scene with Ares meeting with Hades could easily have been cut from the film without harming the pace of the story. This is a fun take on the material that very much feels unique from other comic book origin tales while still following the same formula.  This is the animated film I’d show anyone who couldn’t believe a comic book film could be made for girls. This is a character that is a great role model for young girls in a time when unfortunately their options consist of raunchy reality stars or singers with flexible morals.

Wonder Woman is presented in the aspect ratio 1.78:1.  The 1080p image is arrived at with VC-1 codec at an average of 15 mbps.  At any point in the film you can pause it and see the line definition in the characters; although I’m not a fan of how sharp some of the edges can be on the figures, I can still appreciate the variety of looks the characters have.  The color comes through beautifully; the numerous locations offer up a variety of looks that are filled with color and given a unique design.  The main issue I had was with the movement while characters would speak; there seems to be a banding issue, but really it’s nothing that is too distracting.  What I did find a bit distracting is the movement of the camera in the film where it would move with the action; this for me was too much during the fight sequences.

The DTS-HD Master 5.1 Audio track is clean, though it doesn’t have what I’d consider a complex sound design for an animated feature.  The dialog is clear throughout, but the music just lacks the added layer to make some of these scenes a bit more impactful.  The side and rear speakers are used more for the fighting effects and moments where we have scenes with crowds.  I wouldn’t say this is a bad mix; I just think it could have been stronger.

Audio Commentary:  Here we get a track with the director and several members of the crew.  This is a short film, and still there are several long pauses in the conversations.  There is plenty of input about the making of the film, but really it was a struggle to keep my attention at times.

Wonder Woman a Subversive Dream: (25:36) A nice documentary about the creator of the comic and how much of an impact the comic and the character had on pop culture and women in America.

What Makes a Wonder Woman: (10:06) A breakdown of what makes the character so relevant over the years and what made her special from day one.

Wonder Woman Daughter of Myth: (25:40) A look at the mythological origins of Wonder Woman as well as her cultural influences at the time and how they have changed over the years.

A Sneak Peak at Batman and Harley Quinn: An extended trailer with a behind-the-scenes look at the process of the story coming together and the talent involved in the next animated feature.

I really enjoyed this one; before the live-action film comes out, I imagine I’m going to watch this again.  It’s sad how long it has taken to see these strong female characters get their own films, because there are so many young girls and women who are going to love seeing this character for the first time, and now they have a character they can connect with that can go toe to toe with the other major comic book heroes.  I hope DC animation puts out more Wonder Woman films; I love what they have started, and I feel it will only get better.

Brent Lorentson is a horror writer and film critic based out of Tampa, Florida. With a BA in Digital Film, he co-wrote and co-directed Scavenger Hunt. His short stories have appeared in various horror anthologies. In 2019 his short script Fertile Blood will be a part of the anthology horror film Slumber Party. He is currently working on his first novel A Dark and Secret Place set to be released in late 2019. Favorite Films: Taxi Driver, Fight Club, I Saw the Devil, The Wild Bunch, Dawn of the Dead, A Clockwork Orange, Pulp Fiction, Heathers, The Monster Squad, and High Fidelity.
Divorce: The Complete First Season (Blu-ray) Get Out (Blu-ray)