The Handmaid’s Tale: Season One (Blu-ray) 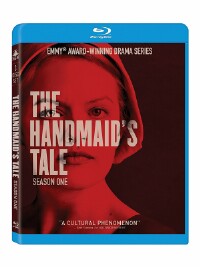 “Now I’m awake to the world. I was asleep before. That’s how we let it happen…nothing changes instantaneously. In a gradually heating bathtub, you’d be boiled to death before you knew it.”

The most amazing thing about The Handmaid’s Tale — other than a powerhouse lead performance from the best actress working in television right now — is that this harrowing, suddenly timely cautionary tale about what happens when society falls asleep at the wheel is based on a story that was published more than 30 years ago. Of course, the show has a lot more going for it than impeccable timing.

“I know this must feel so strange, but ordinary is just what you’re used to. This may not be ordinary to you now, but after a time it will. This will become ordinary.”

The Handmaid’s Tale is based on Canadian writer Margaret Atwood’s 1985 novel of the same name. Sometime in the not-so-distant future, the world is in chaos after environmental pollution and sexually transmitted diseases result in a catastrophic decline in human fertility rates. In the U.S., the result was Second Civil War, which led to the establishment of a totalitarian, Christian fundamentalist government known as Gilead. And while life isn’t exactly a picnic for anyone outside of Gilead’s elite ruling class, life is especially dire for women: they are not allowed to own property, work, handle money, or read. Much of this information is revealed in dribs and drabs; we don’t get to see the rise of Gilead until Ep. 3/“Late”

Instead, The Handmaid’s Tale begins by thrusting us into the life of June Osborne (Elisabeth Moss), whom we meet as she scrambles toward the Canadian border with husband Luke (O.T. Fagbenle) and young daughter Hannah. (Sadly, they don’t all make it.) Separated from her family, June’s identity is stripped and her name is changed to Offred, a handmaid to Commander Fred Waterford (Joseph Fiennes) and his wife Serena (Yvonne Strahovski). Handmaids live in their adopted family’s home and are routinely subjected to ritualized rape in order to bear children.

“They should have never given us uniforms if they didn’t want us to be an army.”

Season 1 follows June as she forms bonds with fellow handmaids — including the feisty, fiery Ofglen (Alexis Bledel) and tragically deluded Ofwarren (Madeline Brewer) — who are periodically subjected to strict discipline by Aunt Lydia (Ann Dowd), the militant mother figure assigned to oversee them. But as word of a resistance movement starts to spread, Offred has to walk a tightrope between living her miserable life to avoid arousing suspicion and keeping the spark of hope alive within her.

The Handmaid’s Tale is created by Bruce Miller, a writer producer who worked on SyFy’s Eureka and The CW’s The 100. The former series offered a cracked mirror, off-center version of reality, while the latter is a post-apocalyptic drama: both sensibilities proved extremely beneficial for Handmaid’s. A large share of the credit also goes to Reed Morano, who won a Directing Emmy for her work on Ep. 1/“Offred” and established the show’s spellbinding visual tone by helming the first three episodes.

This series is Hulu’s first big prestige television swing, and the streaming service clearly spared no expense. Production values here are top-notch; Handmaid’s Tale has a dystopian/militaristic vibe that is all the more captivating when you realize most of the prominent characters are women. (Not the usual protagonists for this sort of story.)

Season 1 largely chronicles June’s time as a handmaid, with frequent flashbacks showing various characters’ lives in the pre-Gilead world. On a lesser show, flashbacks would run the risk of disrupting the main story’s momentum. But on Handmaid’s they play a pivotal part; they symbolize Offred struggling to hang on to hope by recalling her life as June. I’d say the one prominent misfire is Ep. 7/”The Other Side,” which is essentially one long flashback dedicated to a tertiary character. I’m sure some people enjoyed it and I get why the writers felt the need to tell the story, but dedicating an entire hour out of a 10-episode season felt a bit much.

Mostly, it was a bad idea to be away from Elisabeth Moss and her outstanding work as June/Offred for that long. Moss became a star thanks to her tremendous work on Mad Men as Peggy Olson; Don Draper was the main character of that classic show, but Peggy was our entry into that world — the series starts during Peggy’s first day on the job — and her character had the most pronounced arc as the world at-large changed drastically between 1960 and 1970. In Handmaid’s, Moss gets to play another woman radically out of step with the times. She projects incredible strength, a gallows sense of humor courtesy of June’s cynical internal monologue, and an ocean’s worth of emotion in this performance. (The standout is a scene in the season finale/”Night” when Serena emotionally tortures her.) The result was a loooooooong overdue Best Actress Emmy for Moss.

Fiennes is appropriately oily as Commander Waterford, but it’s Strahovsky’s work as his cruel, conflicted wife that has gone criminally unrecognized. Ep. 6/”A Woman’s Place” is an interesting look back to a time when the Waterfords were equals and shows how they helped shape the current world order. The season concludes with a killer double whammy: Ep. 9/”The Bridge” is probably the tensest most tragic hour in this batch of episodes, while the finale carries an emotional wallop and sets the stage for some intriguing new conflicts next season.

The Handmaid’s Tale: Season One is presented in its original aspect ratio of 1.78:1. The 1080p image is arrived at with an AVC MPEG-4 codec at an average of 21 mbps. Like other dystopian stories, Handmaid’s Tale is characterized by a miserable gray palette; it looks like the nation’s lifeblood and color has been drained out of it here. That being said, there are frequent, conspicuous pops of color, most notably the red that the Handmaids are forced to wear. The Wives in Gilead are forced to wear blue, which is another color that jumps off the screen whenever the camera focuses on Elisabeth Moss or Alexis Bledel’s piercing blue eyes. Those razor sharp close-ups are even more striking since the background image is often blurred and fuzzy on purpose. Black levels can get a little murky inside the low-lit Waterford home, but that’s really a minor quibble. This fantastic visual presentation from Fox succeeds in transporting the viewers into June’s nightmare.

The DTS-HD Master Audio 5.1 track immediately makes a strong first impression as we are thrust into June’s desperate, ill-fated escape attempt with her family. It’s a chase sequence featuring a speeding car and gunfire in the distance, which gives the rear speakers a nice workout and establishes the strong and dynamic separation on display. That separation goes well beyond “dialogue in the front/ambient noise in the rears”; the track takes the time to separate the various parts in Adam Taylor’s score. Yes, this is largely a dialogue-driven drama, but this lively track — which also perks up during a public execution in the pilot and a trip to an underground sex club in Ep. 8/“Jezebels” — thoughtfully pumps up the volume in a way that immerses us in this world.

Script to Screen — The Salvaging: (8:01) Series creator Bruce Miller breaks down the brutal sequence in Ep. 1 where Offred and the handmaids are brought in to execute (someone they’ve been told is) a rapist. Miller says the ritualized execution serves as a violent, cathartic, and necessary outlet for the repressed handmaids. Reed Morano (the episode’s director), Elisabeth Moss (June/Offred), and Madeline Brewer (Janine/Ofwarren) also pop in to offer their perspective.

Hope in Gilead: (5:32) Brief but effective series overview featuring input from the show’s cast and crew, along with author Margaret Atwood. The writer talks about the varied reaction to her novel from audiences in England, her native Canada, and the U.S. The focus here is how Atwood’s prescient 1985 novel — “When they slaughtered Congress, we didn’t wake up. When they blamed terrorists and suspended the Constitution, we didn’t wake up then either” — served as a warning for a populace that was decades away from being politically woke.

The Handmaid’s Tale: Season One features all 10 episodes on three discs.

The show is the first critical and commercial home run for Hulu — picking up a total of 8 Emmys, including Best Drama Series — and the latest buzzy hit produced by a streaming service. The highly-anticipated second season is set to debut April 25.

I know I’ll be keeping my Hulu subscription until then. But if that’s not an option for you, be sure to pick up this Fox Blu-ray with its terrific A/V presentation.

Contest – Win A $10 iTunes Card To Celebrate The Premiere Of Followers When Calls The Heart: The Heart of Homecoming