Posted in: Game Reviews by Archive Authors on May 6th, 2003 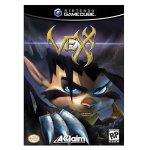 Video gamers now have another platformer to try out on their Nintendo GameCube console. Vexx, from Acclaim, has just landed on the system and brings with it some interesting visuals, unique features, and unfortunately, a much maligned camera system.

The basic story behind Vexx is that of a young warrior of the same name whom lives in the peaceful village of Overwood on the planet Astara. That is, until one day when the evil Dark Yabu and his henchman showed up in town and destroy…d everything. Vexx and his grandfather Vargas were then enslaved along with the other villagers–banished to work in the mines.

However, Vexx rose up to defend himself one day, and in the confusion, Vargas the grandfather was struck down instead. Now Vexx has escaped and is on the run with no help except from a pair of Astani War Talons which he has found and equipped. Players pick up the quest of Vexx at this point and, after a short training session, are on the way to saving Astara by way of destroying Yabu.

Most players will probably compare the visuals in Vexx to those seen in Jak and Daxter and Ratchet & Clank over on the PS2–and it wouldn’t be a stretch to want to compare it to those titles. But it really can’t be said that the graphics here are as smooth and polished as those other two games, and in fact they aren’t.

Although Vexx does get away with some interesting character models and challenging platform levels, it does not really break any new ground visually. It just appears that many of the features and designs that made those other two titles fresh, has just been rehashed here.

However, Vexx does not necessarily slack when it comes to the colors, textures and characters you will end up seeing. Most of the areas are modeled quite smooth and the many enemies Vexx does battle with are unique. There are some interesting power up and environmental effects which present themselves rich and smooth in color and texture. Vexx himself appears to be made up of a fair amount of polygons and is detailed quite nicely.

The graphics in the GameCube version are not as sharp as those on the Xbox and PS2 versions however–even though the title boasts progressive scan, so players may want to keep this in mind if they have multiple systems.

The sound in Vexx is not too shabby with the inclusion of Dolby Pro Logic II surround sound for the in game music and special effects. This helps in creating a nice atmosphere and reality within the game. Home Theater buffs will enjoy these benefits to the fullest, so it pays to have your console connected to your HT setup.

Speech and script are marginal and one drawback is that much of the spoken speech tends to be drowned out by special effect noise or music. There are subtitles present during these times, but it would be nicer if the speech was brought more into the foreground rather than being another noise in the overall mix.

Spread out over nine worlds with up to 70 objectives to complete, Vexx surely provides much to see and do. One of the highlights in the game is a combo based fighting system that Vexx can use on his opponents. Using a combination of buttons can unleash a deadly volley of attacks against enemies, or even allow Vexx to spin and jump to higher platforms–gathering goodies on the way.

There are power ups to be acquired in the game and one of these items is a Shadowraith Heart which is needed to power up the travel portal between worlds–so in order to progress through the game, Vexx has to collect these hearts and power the portal.

That sounds easy enough, yet the actual job of going about collecting items and hearts is horribly put to test by attempting to move Vexx into some tight areas and high places. This is due to the camera system which, for some reason, does not like to be locked into a third-person perspective behind the character. Rather, it likes to swing freely in every direction instead of straight forward behind Vexx.

As you might have guessed, this makes for some really frustrating moments and badly placed jumps. It will not be uncommon for you to have to repeat a jump several times because of the quirky camera, and things like this really tend to draw a title down. Indeed with Vexx, this is exactly what happens. Platform games can be challenging enough without having to fight a clunky camera system on top of it, and nobody likes to redo a task over and over because of a flaw in the game mechanics.

Many gamers will probably be dropping the controller on Vexx pretty soon out of the gate thanks to the maligned camera system and rehashed game environments. It’s a shame, because Vexx appeared to have some promise of being a nice companion piece to some of the other platform titles on the market.

However, after having to repeat jumps or making yourself crazy trying to reach a platform for 15 minutes, Vexx will invariably drive you back to those other titles. Give it a rent if you want a study in aggravation, otherwise pass on it.