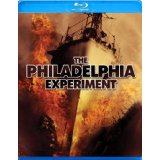 I don’t like remakes for probably the same reasons you don’t like them — they’re lazy and creatively bankrupt — but I’m also not completely against the idea of revisiting an older film. When the older film isn’t a beloved classic that shouldn’t be touched or when a story can be more effectively presented using technology that simply didn’t exist when the original movie was made, remakes aren’t such a bad idea. By those standards, 1984’s The Philadelphia Experiment is actually an excellent choice to receive the remake treatment. And that’s why I’m so disappointed to see it go so wrong.

Both incarnations of The Philadelphia Experiment get their names from a hush-hush World War II military experiment — also known as “Project Rainbow” — carried out by the U.S. Navy at the Philadelphia Naval Shipyard in 1943 that is almost definitely a hoax. (Unless it’s not.) The experiment involved using a cloaking device to render the Navy destroyer USS Eldridge invisible. In the 1984 film starring Michael Paré and Nancy Allen, two WWII-era sailors were transported 40 years into the future through a vortex created by the ship’s generator.

The new film, which originally aired on the SyFy network last year, has cocky scientist Falkner (Ryan Robbins) adapting the same 1940s technology to create a cloaking device for his bosses at Evil Inc. the Grey Watch corporation, including bigwig Kathryn Moore (Gina Holden). Falkner succeeds, but he also brings back the USS Eldridge from 1943 along with its sole surviving crew member, Lt. Bill Gardener (Nicholas Lea). When he inadvertently switches places with a hapless local deputy (John Reardon), Bill teams up with the deputy’s girlfriend Molly (Emilie Ullerup), who also happens to be Bill’s granddaughter(!) and a world-class hacker(!?). Meanwhile, the Navy destroyer becomes increasingly unstable and keeps spontaneously disappearing and re-appearing in exceedingly inconvenient places like atop a Chicago skyscraper and in an industrial part of England. Bill and Molly have to dodge the evil corporation, save Deputy Doofus and stop the ship’s unpredictable movements before it destroys the world.

I liked that this film used the original “Philadelphia Experiment” concept — rather than the 1984 movie — as its foundation, so I suppose this version is less of a straight-up remake and more of a reimagining/refurbishing/whatever euphemism for “remake” you prefer. Unfortunately, that will almost certainly be the last time I begin a sentence with “I liked…” in this review.

As you probably surmised from the sentence “originally aired on the SyFy network”, the effects and actions sequences in this new Philadelphia Experiment aren’t exactly top-notch. It’s impossible not to think of how much cooler and more effective certain scenes — the ship’s cloaking; the mayhem in the big cities — would look with a heftier budget. To be clear, I’m not mad at these filmmakers for having limited resources; I’m disappointed that the best we could do with such prime remake material was give it the SyFy treatment, where the acting is often as questionable as the visual effects.

Speaking of the acting, only Robbins seemed to be having any fun as the initially-jerky Falkner. There was some juicy fish-out-water material for Lea to explore that was left on the table in favor of more obvious shortcuts. (Bill is mystified by Goths, rap music and Velcro!) Malcolm McDowell (A Clockwork Orange) turns up for a few minutes to spout some exposition and…not a heck of a lot else. Most confusing of all is the presence of Paré, the lead in the 1984 film, in a completely charmless role as a Grey Watch henchman. Paré still looks good for his age and this is the SyFy channel, so when I saw his name in the cast I hoped his presence would be some sort of fun/cheesy nod to the original film. Instead, he’s basically the lead henchman (which, I suppose, is better than being the second or third henchman).

To make matters worse, the movie features a rushed ending, the world’s least convincing master hacker and a laundry list of other silliness that isn’t even particularly fun. It goes without saying this was a failed Experiment.

The Philadelphia Experiment is presented in an aspect ratio of 1.78:1. The 1080p image is arrived at with an AVC MPEG-4 codec at an average of 28 mbps. The Blu-ray transfer from Anchor Bay features impressive detail in both close-ups and medium shots, and works extra hard to try and convince us everything we’re seeing wasn’t filmed in various parts of Canada. The action in the film jumps from (just outside) Philadelphia and Chicago to England and even the Sahara Desert, but the woodsy, muted palette screams “British Columbia!” Black levels could’ve been deeper during the scenes inside the dark ship, but you probably won’t even notice because you’ll be chuckling at the “lightning bolt” effects. The scenes with Falkner’s team of scientists are also an atrocity from a lighting perspective. Thankfully, if you ignore the (non)special effects and use the outdoor scenes as your baseline, this is a decent presentation.

The Dolby TrueHD 5.1 track is entirely too aggressive in cranking out Michael Neilson’s ever-present score. It’s almost as if director Paul Ziller — who has become a reliable SyFy hired hand — believed his audience would stop watching if the music didn’t let us know something exciting was happening on-screen. (It wasn’t.) Subs are also used to constantly underline a lot of the action, but they were utilized more effectively. (Especially whenever the ship disappears or reappears.) The previously dunderheaded track becomes surprisingly dynamic during the film’s big car chase, with bullets and grenade launcher blasts traveling from one speaker to another. I also appreciated the rears getting a brief respite from pumping out the generic score to give us some airplane noises in a couple of brief scenes between Falkner and Moore on a private jet.

Like a lot of other SyFy offerings, there are no special features on this release. I believe the potential still exists to make a great movie out of this stranger-than-fiction story. (“We have the technology…”) Unfortunately, this film doesn’t come close to reaching that potential and is not even among SyFy’s better, entertainingly campy offerings.