Posted in: Disc Reviews by Gino Sassani on August 27th, 2013 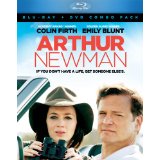 You might be asking yourself the obvious question here. I know that I was. Who is Arthur Newman? Arthur Newman is Colin Firth. The busy actor has been the king of the hit-or-miss movie. He’s scored some wonderful roles in films like The King’s Speech. But much of his career has been as a chameleon actor in niche independent festival films. Arthur Newman certainly fits in that latter category. In fact, the film has been making its way through the European circuit for the better part of the past year. Now it appears poised to make the jump to at least a few mainstream multiplex screens. I wouldn’t hold out much hope for the chances. Direct to video might have been a better landing place for this one. It’s about to get Summer Stomped.

Who is Arthur Newman? Arthur Newman is Wallace Avery (Firth). He’s going through the mother of all mid-life crises. He’s divorced and his son Kevin (Hedges) pretty much hates him. He has an “almost” live-in girlfriend Mina (Heche) who treats him with mostly indifference. He was once a promising golf amateur who choked when he got his shot in a PGA tour. Now he’s a floor manager at a Fed Ex office where he feels more like a zombie. He decides to check out of his life by faking his own suicide and taking on the identity of the deceased Arthur Newman. Yes, we get it (New Man). His first night at a dive motel his path crosses that of Mike (Blunt). She’s just been arrested for steeling a guy’s car, and when she gets out she overdoses on morphine cough syrup, two bottles, (she had a really bad cough) and is nearly comatose at the motel swimming pool. He takes her to the hospital and picks her up when she’s released. She appears to have nowhere else to go, so he decides to take her with him. Where exactly are they going, you might ask. He met a golf course owner from Terra Haute who offered him a job after he helped clean up his swing. Arthur Newman was the first name that popped into his head, and now he hopes to show up for the job as the alleged Asian golf pro.

Along the way the two become closer. Neither can relate to another as themselves, so they begin a cross-country game. They see a couple and follow them home. When the couple leaves again they break into the house and take on the couple’s identity for a short bit of fantasy play. It’s the only way they can allow each other to be close. It’s actually a rather clever and interesting idea and plot point if it weren’t used merely to lead to sexual encounters between the two. It could have been a wonderful gateway to self-awareness. The self-awareness eventually comes, but it happens for almost no apparent reason than the discovery the film focuses on along the way. What is a promising journey becomes a muddled disappointment that might have worked better as a typical raunchy comedy.

You could call this a road film, but it’s too slow and thoughtful to sustain that kind of image. The audience is left to derive satisfaction not from the intriguing setup but rather through the personality of these two characters. And it’s there that the film gives its one and only true spark. The two are quite good in their damaged characters, and there are times the chemistry allows us to forget that there’s nothing else here to sustain our interest.

The pacing is another serious issue. Director Dante Ariola can’t seem to settle into a story or style. We get sidetracked by a B-story which has son Kevin attempting to connect with his presumed dead father by looking at his place and spending time with Mina. It’ turns into a sadly awkward situation that plays with a kind of sexual tension between the young teen and the jilted girlfriend. These scenes lead to serious groans and a feeling that the film has jumped the tracks. I’m not sure if that’s really where Ariola was going, but the implication is unsettling, to say the least. There are too many throwaway characters and events that serve only to distract from the only thing the movie has going for it, and that’s the two leads.

Arthur Newman is presented in its original aspect ratio of 1.85:1. The 1080p image is arrived at with an AVC MPEG-4 codec at an average 30 mbps. Everything about this high-definition image presentation is soft. Colors and textures have a mellow, hazy edge that is actually quite atmospheric. That’s not to say the picture isn’t sharp and clear. Light is quite natural particularly during daytime exteriors. The entire palette has a very filmic quality with a hint of grain and organic feel to the entire presentation. Black levels are average, often leaning a bit towards dark grey. There’s plenty of shadow definition, it’s just not the inky blacks a modern digital film might have provided. All of this is completely appropriate to the film itself and leaves you with a pleasant warmth throughout.

The DTS-HD Master Audio 5.1 is the provided audio presentation. The box lists it incorrectly as 2.0. It’s a very quiet film, so there isn’t going to be any loud intrusion or aggressive mix here. The dialog is served quite satisfactorily here. The score is just as quiet, featuring a slow and mellow piano for the most part. Anything more is usually source music. Not a lot of sub action, but again this is a quiet piece that allows the focus to be on the performances where it ought to be.

Behind The Scenes: (30:27) The cast and crew offer the usual sound bites along with clips and several pieces of the shoot exposed. One gets the impression the shoot was as laid back as the film itself.

Who is Arthur Newman? He’s a dead guy who had his identity stolen, and while we never get to meet the poor guy, I think he might have been the best part of the film. After all, “It’s a lot easier to love a dead man, isn’t it?”

Gino Sassani is a member of the Southeastern Film Critic's Association (SEFCA). He is a film and television critic based in Tampa, Florida. He's also the Senior Editor here at Upcomingdiscs. Gino started reviewing films in the early 1990's as a segment of his local television show Focus. He's an award-winning recording artist for Omega Records. Gino is currently working on his 8th album Merchants & Mercenaries. Gino took over Upcomingdiscs Dec 1, 2008. He works out of a home theater he calls The Reel World. Favorite films: The Godfather, The Godfather Part II, The Body Snatcher (Val Lewton film with Karloff and Lugosi, not the pod people film), Unforgiven, Gladiator, The Lion King, Jaws, Son Of Frankenstein, The Good, The Bad And The Ugly, and Monsters, Inc.
Super Storm (Blu-ray) Pain & Gain (Blu-ray)