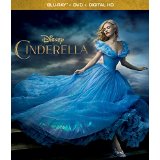 “Have courage and be kind.”

Those words — repeated many times in this newest version of Cinderella — serve as both the title character’s mantra and the film’s unofficial tagline. The message is elegant in its simplicity in a way that mirrors this refreshingly old-fashioned adaptation, which resists the prevailing urge to modernize and/or revise a classic story.

“Once upon a time, there was a girl named Ella…”

It was just about 65 years ago that Cinderella had her coming out party. Of course, versions of the classic fairy tale had been published in previous centuries, but it was Walt Disney’s 1950 animated classic that turned glass slippers, fairy godmothers, and pumpkin carriages into pop culture mainstays. In the ensuing years, we’ve gotten the obligatory teenage update, the even more obligatory straight-to-DVD Disney sequels, the jokey revisionist take, the jokey male version and even Cinderella as historical fiction. (Which also happens to be the best of the bunch.)

You may have noticed the one thing conspicuously missing from that list: a straightforward, live-action treatment of the story for the big screen. It’s an understandable omission since Disney’s cartoon has stood the test of time as the definitive version of Cinderella. So it makes sense that the Mouse House would be the only one capable of going back to this enchanted well.

“Just because it’s what’s done, doesn’t mean it’s what should be done.”

It’s no stretch to say that reboots and re-imaginings of established properties seem to have taken over multiplexes in the last decade or so. Disney is, obviously, no exception. Once Upon a Time — ABC’s indiscriminate mash-up of Disney properties — is about to wrap its fourth season. And last summer, the studio had a bona-fide blockbuster in Maleficent, which completely re-worked and largely discarded the story in Disney’s own animated Sleeping Beauty. I didn’t like Maleficent for a variety of reasons, but its box office success is undeniable. Even though this newer version of Cinderella was likely already in production by the time the Maleficent money started rolling in, you have to wonder if Disney executives were kicking themselves for not greenlighting Lady Tremaine instead. I’d argue Disney actually pulled off a welcome swerve by avoiding the radical re-invention route.

This version opens by showing us Ella as a little girl, and the parents (played by Hayley Atwell and Ben Chaplin) who instilled her gentle nature at a young age. They treated Ella like a princess, and Ella pays it forward with every living creature she meets. Lily James (Downton Abbey) plays Ella as she grows into a gracious young woman. After having lost her mother as a child, Ella’s father dies shortly after marrying a severe, stylish woman named Lady Tremaine (Cate Blanchett), who had recently arrived at Ella’s home with her two shrill, spectacularly untalented daughters (Sophie McShera and Holliday Grainger). Lady Tremaine assumes control of the household, and Ella gamely endures the humiliation of serving her new family. (It’s the stepsisters who derisively give “Cinderella” her new nickname.)

With this being a fairy tale, there has to be a handsome prince somewhere. Enter Kit (Richard Madden), a prince-in-training whose father (Derek Jacobi) is trying to mold into a future king. Ella and Kit meet cute one day in the forest, and the prince decides to throw an all-inclusive royal ball in hopes of seeing her again. And if you need me to synopsize the story of Cinderella beyond that, then I don’t know what to tell you. Helena Bonham Carter plays Cinderella’s fairy godmother (who also narrates the film), but her flighty performance — Carter plays the fairy godmother as if she’s the only person in this film who has seen Cinderella and knows what’s going on — is one of the very few wonky notes in this adaptation.

Director Kenneth Branagh continues to be surprisingly well-suited to big-budget filmmaking. (Cinderella has a reported budget of $95 million, which is a little more than half of Maleficent’s $180 million budget.) With Thor, Branagh found a way to humanize a potentially silly character and conceit by basically turning the whole thing into Shakespeare. In Cinderella, he skips the greenscreen excess of Maleficent — which mostly seemed excessive because that movie’s best special effect was Angelina Jolie — in favor of eye-catching (and tangible) costumes and real-life locations. (Filming took place in England.) It’s no accident the movie only ever feels phony when it overly relies on effects wizardry, most notably in the crucial moment involving the transformation of Cinderella’s dress. On the other hand, Branagh and credited writer Chris Weitz have some clever fun with the animals that are unwittingly recruited to assist Cinderella on her big night.

The main reason those goofier moments stand out is because Branagh grounds a significant part of the movie in relatable drama. In his hands, Cinderella is basically a shiny period drama about how hard it can be to blend families. Although Blanchett certainly seems to relish playing up Lady Tremaine’s nastiness, we also get glimpses at the character’s insecurity and frustration with occupying the same space as Cinderella’s saintly mom. Lady Tremaine’s concern about her horrible daughters’ social standing is only a more ruthless version of the King’s concerns about Kit marrying a commoner.

Branagh even makes the manner in which Cinderella ends up serving her wicked stepmother and stepsisters — they’re obviously not equipped to do housework that needs to get done — feel somewhat logical. James is a lovely, feisty Cinderella, even if she doesn’t fully command the screen. (It’s fine because Cinderella herself doesn’t exactly demand your attention as much as she casually attracts it.) She has pleasing chemistry with Madden, who makes the lovestruck, potentially-bland Kit feel like an engaging and worthy match for Cinderella. (Contrast that with the Prince in the cartoon, who didn’t even get to have a name.) Stellan Skarsgard also has a few amusing moments as the scheming Grand Duke.

Of course, this is still Cinderella, and Branagh doesn’t forget to include moments meant to make moviegoers swoon. The director nails the “top of the staircase” grand entrance, which is especially important since Cinderella practically invented that trope. Cinderella’s first dance with Kit is also largely shown as a dizzying, intoxicating long take.

Cinderella is presented in an aspect ratio of 2.40:1. The 1080p image is arrived at with an AVC MPEG-4 codec at an average of 32 mbps. The visual presentation is as bright and dazzling as you’d expect from a Disney production. Colors practically leap off the screen (without the aid of 3D) in everything from Sandy Powell’s majestic costumes, Lady Tremaine’s fiery red hair, or the lush green landscapes. However, the element that takes Cinderella to the next level is how earthbound and tangible most of it feels. (As with the film itself, the weaker parts here are the ones that rely a bit too much on CGI.) There’s a pleasing earthiness and rich texture to everything from those elaborate costumes to the castle walls. Black levels offer fantastic separation, which is most useful during any scene in Ella’s dank attic. Overall, this spotless, resplendent presentation is as good as it gets.

The DTS-HD Master Audio 7.1 track is more gently whimsical than the seven-channel presentation might suggest. On one hand, it feels like slight overkill. Immersion is generally a bit more understated than expected with Patrick Doyle’s delightful, sweeping score taking up near permanent residence in the rear channels. But when you listen closely, you find find that absolutely every sound on screen is accounted for on this track. Even better, those sounds are presented in lively, surprising ways that ease you into Ella’s world without walloping you over the head. Of course, there is certainly a sense of wallop during the centerpiece sequence at the ball, which features fireworks, buzz from the assembled guests, and (naturally) music. Subs pipe in during both the galloping stag hunt where Ella meets Kit, and during the race home after the clock strikes midnight.

A Fairy Tale Comes to Life: (9:23) A loving, ultimately standard featurette that examines the worldwide appeal of Cinderella’s story. Cast and crew also talk about the influence of Disney’s earlier animated classic and the importance of adding more dimensions to the Prince and Wicked Stepmother.

Costume Test Fun: (2:39) A wordless reel of actors gleefully frolicking, strutting, and mugging for the camera to show off Powell’s exquisite costumes. (I’d be surprised if she doesn’t pick up an Oscar nomination for her work on this film.)

Staging the Ball: (11:27) A deeper dive into the movie’s most lavish sequence. Powell talks about having to design costumes for extras that would normally be worn by the stars of most other movies. Branagh shares his desire to create a ball that any viewer would want to attend. Judging by the casts’s awe-struck comments/reactions, I’d say he succeeded.

Alternative Opening — Ella’s Childhood: (3:02) Branagh provides a quick introduction to what is essentially a deleted scene that shows Ella as a little girl, as opposed to jumping straight from her being a baby into a pre-teen in the theatrical cut. It’s a well-played sequence, but the theatrical version remains a more effective way of getting into the story quickly.

Ella’s Furry Friends: (3:43) Animal trainer Guillaume Grange talks about having to wrangle geese, mice, and other furry creatures for the film. We also see James and Madden do some horseback training. (James was a complete newbie.)

Although the selection of special features is a touch underwhelming, this Blu-ray from Disney more than makes up for it with its top-shelf audio/visual presentation. More importantly, this smart, dazzling, delightful adaptation of a classic fairy tale gives you an excellent chance to revisit the original “Cinderella story.” “I do love a happy ending, don’t you?”