Posted in: Disc Reviews by Archive Authors on May 19th, 2016 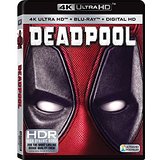 “Some of the best love stories start with a murder.”

Deadpool may be one the most singular and unique characters in the history of comic book lore. His character has a very rabid fan base among the elite of Marvel comic nerddom, and they have been watching very carefully to see that he has been treated properly by the Hollywood people. He hasn’t been in the past, but more about that later. He may not be the biggest name in the Marvel universe, but he might be the most extreme. Just in case you live in a cave or under a rock, the Marvel universe is inexorably taking over the actual universe with films like The Avengers, Iron Man, Thor, Captain America, Ant-Man, Spider-Man, X-Men, Guardians of the Galaxy, The Hulk, Wolverine, Daredevil, and on and on. To get back to what happened to Deadpool in the past, we go to the movie X-Men Origins: Wolverine. This also gets into the 20th Century Fox vs. Disney battle over the rights of Marvel characters (which is actually only a small part of the picture, since Columbia owned Spider-Man for a long time, but let’s not go down that rabbit hole). Lots of hard-core comic book fans were incensed at how far 20th Century Fox was straying from the origins and substance of the source material with the X-Men movies, but especially in the case of Deadpool, who is sacred to many. I shouldn’t say sacred, but what can you do, since the character of Wade Wilson (A.K.A. Deadpool) is very profane and NSFW.

Let’s discuss Ryan Reynolds for a moment. Reynolds has been a Deadpool fanboy for years and is specifically mentioned in the comics in a description of Wade Wilson as a cross between Reynolds and a Shar Pei. It should be noted the main characteristics of the Deadpool comics is that it has strong content in both sex and violence that is relentlessly full of silly fun and that Wilson is fully aware that he is in a comic book and talks to the reader in a self-aware manner. So Reynolds played Wilson in the X-Men Origins: Wolverine movie, and Fox did not show proper concern for the concerns of the core fans, and hysteria ruled. Reynolds then took it upon himself to try to get a proper Deadpool movie made (again, I shouldn’t say proper). I think this time they got it right (and when I say right, I mean wrong in all the best possible ways).

The movie starts off with one of the best opening credit sequences of all time, and if you are not on board in the first five minutes, you should run from the theater, because this is not for you. The film is directed by Tim Miller, not be confused with comedian T.J. Miller, who plays Wilson’s bartender friend.

I won’t begin to try to summarize the plot, but simply state that this is an antidote to any other superhero movie out there. In fact, the X-Men are specifically skewered by the film with the inclusion of a rather silly version of Colossus and the X-Men mansion. It is unbelievably violent and gory, full of very bad language, and with a sex scene to rival Trey Parker and Matt Stone’s Team America: World Police. In other words, it is wonderful but definitely not for the children (but we know they are going to get to see it anyway). I have warned some of you, and for everyone else, run out and see this multiple times and savor the sick, twisted satire that is Deadpool.

Deadpool is presented in an aspect ratio of 2.40:1. The Ultra high-definition image is arrived at by an HEVC codec. This is the kind of film that 4K was made for. These kinds of effects and action sequences provide the kind of amusement park ride experience that makes you want to be right in the seat of the ride. Now we have the potential to bring these larger-than-life comic book splash pages into our living rooms like never before.

I spent time comparing the Blu-ray to the 4K disc and found some remarkable differences. Most important of these is a new-found sharpness that brings out far more detail. In one scene we look at a street where there are parking meters. The numbers can’t be read on the Blu-ray. They are legible in 4K. It’s like putting on reading glasses for the first time. Black levels particularly benefit from this improved focus and sharpness. Textures come alive like never before. The costume’s weave is clearly a distinctive part of the production design that jumps out at you even in a muted red color. Flashes of brilliant color occur during fire scenes. The improved HDR dynamic allows you to see so many more shades of reds and yellows in particular. The most impressive 4K to date. I can’t wait to see where the format goes from here.

The Dolby Digital Atmos defaults to a nice 7.1 mix here. I expected a nice video presentation here. What I did not see coming was just how sweet the audio presentation is. This is an explosive mix that works for subs overtime. I’m not just talking explosions. The sub adds a nice dynamic depth to everything from the percussive score to the dialog itself. The surrounds put you squarely inside the action which will zip around your head in an almost dizzying sensation. I’ve rarely felt this immersed in a movie before. With all of this dazzling and dynamic sound you’d expect stuff to get lost, but it doesn’t. Every element of this audio presentation cuts through in its own unique space. You won’t be riding the remote on this one. Just keep your hands and feet securely inside your chair and enjoy the ride.

There are two audio commentary tracks. 1. Ryan Reynolds and writers Rhett Reese & Paul Wernick. This is the fun commentary. 2. Tim Miller with Rob Liefeld (co-creator of the Deadpool character). This one is the more informative track.

The extras are found on the Blu-ray copy which is the same as the original Blu-ray release.

Deleted/Extended Scenes: (19:14) There are 10 scenes with a handy play-all option and an optional commentary from director Tim Miner. There’s even an alternate version of the stingers.

Gag Reel: (6:12) OK, I’ll be honest. They’re holding out on us. There has to be tons of better stuff than this. This just whets your appetite for the real fun and ugly stuff.

From Comics To Screen To Screen: (1:19:58) This is a pretty exhaustive making-of feature. You get a lot more than the typical cast and crew comments. You hear from the comic writers who developed Deadpool’s comics world. There’s a lot here about Reynolds superhuman efforts to get this film made and made correctly. Action junkies get plenty of stunt footage and even more f/x layers as we peel back each onion layer. Of course, there’s a lot of love-fest going on here, but plenty of meat to go along with that fat.

The version of the character we got in the first Wolverine movie was a huge disappointment to the fans. That included Ryan Reynolds himself. This character has to be R-rated and irreverent as hell. Fox took a pretty big chance by giving the film its R rating. The result? “…Good Deadpool”

The Witch (Blu-ray) The Nice Guys