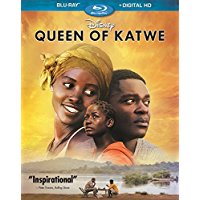 “In chess, the small one can become the big one.”

It’s hard to stand out in the Disney family when your big brothers and sisters are Star Wars, Marvel, and the studio’s own blockbuster animated offerings. (Not to mention live-action re-imaginings of its own classic animated offerings.) While those properties have been making a racket at the box office, the Mouse House has also been quietly cranking out family-friendly, multi-cultural sports dramas in recent years, including 2014’s Million Dollar Arm, and 2015’s McFarland U.S.A. I’m not sure if Queen of Katwe is the best of that bunch (I really enjoyed McFarland) but it certainly has the most unlikely hero.

“This is the Queen. She is the most powerful of all pieces.”

Queen of Katwe is the story of Phiona Mutesi (newcomer Madina Nalwanga), a pre-teen girl living in the slum of Katwe in Kampala, Uganda. Phiona and her siblings live with their mother Harriet (Lupita Nyong’o), who struggles to provide for her family following the death of the kids’ father. One day, Phiona wanders into a chess program headed by Robert Katende (David Oyelowo) because it offered a free cup of porridge. Turns out Phiona has a prodigious talent for a game that requires players to have a plan and solve problems.

“You belong where you believe you belong.”

Katende takes Phiona under his tutelage, much to the chagrin of Harriet (who needs Phiona picking maize) and at the potential cost of Katende’s own family: he’s eventually offered a more lucrative job that would take him away from coaching the kids, whom he dubs “the Pioneers.” As Phiona’s game improves, she and the rest of the Pioneers go beyond Katwe to compete in national and international competitions, with Phiona earning the opportunity to become one of Uganda’s first female chess masters.

Queen of Katwe is based on an ESPN the Magazine article (and subsequent book) by Tim Crothers, who chronicled the real Phiona’s story. The director is Mira Nair, a long-time Ugandan resident who highlights the humanity and humor in Phiona’s unequivocally rough circumstances in Katwe. Nair also proves to have a steady hand with the inexperienced young cast.

Nalwanga ably carries the movie, which is impressive since much of her performance is reacting (to a chess opponent; to a gentle scolding from her mother) and Phiona doesn’t have any of the cutesy tics many child actors can fall back on. She also has fantastic support from her co-stars, including Nyong’o, who has mostly been heard but not seen (Star Wars: The Force Awakens, The Jungle Book) since winning her Oscar for 12 Years a Slave.

The youthful actress — she often looks like Phiona’s sister, not mother — projects both maturity and a stubborn pride as Harriet struggles with surrendering some of her parental authority to Katende to help provide a better life for her daughter. Speaking of Katende, the character could’ve easily been the star of the show if Queen of Katwe were told a different way. (See the Special Features section for Katende’s own star turn.) Nevertheless, Oyelowo is warm, good-natured and charismatic while also conveying the self doubt Katende encounters. (Phiona inevitably surpasses him as a chess player, so what else does he have to teach her?)

One of the things that sets Queen of Katwe apart from Disney’s recent sports dramas is that there is no White Savior here. (Let’s get real: Saviors on film don’t get much Whiter than McFarland star Kevin Costner.) Katwe immerses itself in African life, and the culture clash doesn’t come from the fish-out-of-water hijinks of an American adapting to new surroundings. Instead, it comes from Phiona’s unease around a more sophisticated class of students. (For what it’s worth, the snobs also look down on the kids from Katwe.)

The winning script by William Wheeler doesn’t contort itself to manufacture stakes. Yes, there’s a climactic chess match toward the end, but the movie’s real knockout moment comes immediately after, when Phiona flips the script on her overworked mom. The movie’s end credit sequence also includes the actors being joined by their real-life counterparts, which is a great, emotional coda to this warm, no-frills, uplifting story.

Queen of Katwe is presented in an aspect ratio of 2.40:1. The 1080p image is arrived at with an AVC MPEG-4 codec at an average of 31 mbps. Much of the action takes place in the slums of Katwe, but let’s not forget we’re still talking about a Disney movie here. So it’s no surprise that this visually pleasing Blu-ray release unearths the shabby beauty in those slums, including panoramic shots with incredibly fine (and grimy) detail on every inch of the screen. While the palette is largely earthy and rural, there are some fantastic pops of colors, starting with the vibrant opening credits and continuing with much of the colorful garb. Black levels also offer nice separation during a few key nighttime scenes (including a destructive flood). This might not be an outwardly dazzling visual presentation, but it is completely free of blemishes and as low-key luminous as young Phiona.

The DTS-HD Master Audio 5.1 track flexes it’s muscles from the iconic Disney logo opening, which is given a drum-heavy African spin. Those drums and an active bottom-end in the score and other musical offerings, keep the subs busy here. While this is a dialogue-driven family drama, all the channels consistently come to life in immersive, effective ways. (During chess sequences with multiple matches occurring at once, or one of Coach Katende’s soccer games.) Overall, this track is a lively supplement to a good story.

Queen of Katwe — Their Story: (29:39) A trio of featurettes that blends behind-the-scenes footage with back story from some of the real-life players. A Spark of Inspiration starts with director Mira Nair leading a coconut breaking ritual during the first day of principal photography and covers the genesis of the project, which was shepherded by Disney exec Tendo Nagenda. Those Who Guide includes the adult actors and the filmmaking team talking about what inspired them about the story, while The Future is Bright focuses on the younger cast members and their true-life counterparts. (Actress Madina Nalwanga brought her own experiences — like bathing with an extremely limited water supply — to the role of Phiona.) Features a Play All option.

Audio Commentary with director Mira Nair: The director, a Ugandan resident for almost 30 years, serves as an uncommonly knowledgeable guide to the film’s various locations. (Including the hospital where she gave birth to her own child.) Naturally, Nair also has effusive praise for her cast and discusses the challenge of filming chess in different ways to keep those sequences visually interesting. Absolutely worth a listen.

A Fork, A Spoon & A Knight: (13:14) An artistic short film, directed by Nair and Zippy Kimundu, about Robert Katende that focuses on his rough childhood, soccer prowess, academic success, and his current work with Ugandan youth. The message here: “how can I use what I have to get what I don’t have?”

In the Studio with Alicia Keys: (6:26) During a studio session for the movie’s “Back to Life” song, Keys talks about connecting with the Queen of Katwe story (a young woman striving to find her path) and developing the track’s uplifting refrain.

Alicia Keys “Back to Life” Lyric Video: (5:01) The song’s lyrics are displayed over still images from the film.

Deleted Scenes: (20:25) There are eight scenes total, and they each include an introduction by Mira Nair, who offers a bit of personal backstory. The highlights are a humorous job application scene featuring Katende and an extended version of the flood sequence in the film’s latter half.

Obviously, I really enjoyed this movie, so I was disappointed to see it barely cracked $10 million at the worldwide box office. (I’m pretty sure you can find that much money between Zootopia‘s couch cushions.)

You can joke about chess being considered a sport, but Queen of Katwe nimbly overcomes many sports movie cliches thanks to terrific, understated performances and a gentle guiding hand from its director. As far as I’m concerned, that qualifies as a “checkmate!”