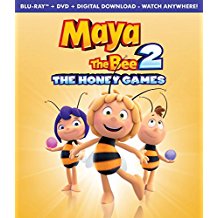 As a general practice, I usually try to avoid watching a sequel without first having seen the first film. However, with Maya the Bee 2: The Honey Games, that was hardly necessary, as it functioned as more of a standalone than a continuation. The story continues to follow the titular character, Maya, as she continues to try to aid her hive in any way she can, this time, participating in the Honey Games in order to prevent her hive from losing half of their honey. Sadly, this movie did not get Nalyce’s stamp of approval, as her attention started to wain pretty much as soon as we started watching it. That said, we soldiered on, and eventually she did manage to find a couple things that she did like about it. Despite this, Maya the Bee 2 won’t be becoming a permanent fixture in her entertainment rolodex.

In this sequel, the survival of the hive is threatened following a slow harvest season, when an emissary of the Empress Bee decrees that the hive is to donate half of their honey supply for the upcoming Honey Games. Realizing that such a donation will leave a lot of hungry mouths, Maya and her sidekick Willy, go to Buzztropolis to try to convince the Empress to let them keep their honey. Their plan goes sideways when the Empress decrees that they can keep their honey if they win the Honey Games. However, if they lose, the hive must give up their entire honey supply.

The news of what is at stake has Maya nervous, but she endeavors on and forms her team for the competition, finding a rival in Violet, another bee competing in the games. Things start off rocky for our hero, but with her positive attitude and her belief that, “every bug has a talent,” she is her hive’s best hope for survival.

So, as I mentioned earlier, this movie did not earn my daughter’s stamp of approval, but it did allow me the means to teach her an important life lesson about maintaining a positive attitude in the face of adversity as well as the importance of remembering that everyone is good at something. So, for those reasons alone, the story has my own stamp of approval. Unfortunately, my daughter is a product of her generation, and if it doesn’t have Disney stamped on it, the film already has two strikes against it. That said, she is not incapable of changing her mind, and she did find some things to enjoy about the movie, such as the positivity with which Maya approaches a problem. Kind of head-on with the belief that if she is honest, everything will be okay.

It goes without saying that there is not much for the adults to enjoy, given that if you are over the age of ten (or a certain six-year-old) we are not the target audience. I think that is OK, as we can use this as a learning experience for our kids. Our job is to impart the right kind of wisdom on to our kids, and I can personally attest that this film is an opportunity to present key life lessons to your kids. The movie is not likely to entertain you,but Maya the Bee 2 is a pretty good visual aid for making that point.

Maya the Bee 2: The Honey Games is presented in an aspect ratio of 1.85:1. The 1080p image is arrived at with an AVC MPEG-4 codec at an average of 22 mbps. Overall, I would rate the visuals of this movie as average. There was nothing really that made it stand out. There is a decent amount of detail in regards to the bees’ bodies; however, the nature background had some vibrant colors; however, when inside the hive the background was muted and blended in with the coloring of the bees. I will say that the green of the bees’ eyes did pop, but that was the most prominent contribution. Given that this was a children’s movie, I didn’t expect much to begin with. Visuals don’t tend to be a big thing with kids.

I feel inclined to mention again that given that this is a kids’ movie, I wasn’t expecting much. The DTS-HD Master Audio 7.1 track of the movie was decent, as I was not struggling to make out the dialog, but if you are looking for an immersive feeling, you will be disappointed, as essentially all the sound is generated from the front speakers. To its credit, the dialog and soundtrack were mixed well, and I did not notice any instances of the dialog being overpowered.

Making of Maya the Bee 2 (14:48): A in-depth behind-the-scenes featurette with the director, who explains where the storyline came from as well as introduces our new character, Violet.

Trailers: Good for reflection, but in all honesty, if you have the movie, there is no need to watch the trailer.

Again, I am glad my daughter managed to find some things to like about the story, and the story does have some important takeaways that kids will be able to apply to everyday life. That said, the film is really a one-off, once you’ve seen it once, there really is no need to watch it again.

Jeremy Butler is a film school graduate of the International Academy of Design and Technology. He is been writing for Upcomingdiscs since 2012; however, movies have played a big part of his life for much longer. Favorite genres include horror, science fiction/fantasy, and comedy. Favorite movies are V for Vendetta, Boondocks Saints, Kiss Kiss Bang Bang, and The Godfather.
Life Of The Party Black Panther