The Steam Engines of Oz (Blu-ray)

Posted in: Disc Reviews by Brent Lorentson on June 7th, 2018 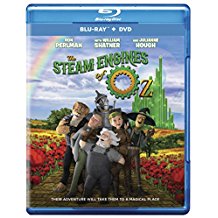 “I have a feeling we’re not in Kansas anymore.”

The infamous line from the classic The Wizard of Oz is what kicks off this film, and this is simply as close as it gets to ever achieving the greatness of the original film. Over the years we have had several remakes and sequels to the story we love that takes us on a journey through the magical world of Oz, so when a steam-punk version of the material came along, it was something I got a little excited for.  Unfortunately the version of the film we get this time around seems to be full of fun ideas but nothing that actually delivers to the screen.

The story picks up 100 years after the events of the first trip down the yellow brick road.  Victoria (voiced by Ashleigh Ball) seems to be a human who takes joy in doing repairs as needed to the steam system that keeps Oz running.  She seems content living in her cell night after night below ground, never having really seen what life is like above ground in the city she is helping take care of.  Running the city is the Tin Man (Matthew Kevin Anderson), who is far removed from the character we first met years ago, and over time he’s turned into a bit of a tyrant who has trouble accepting that he is a tyrant.  The Tin Man seems to be on a quest to change Oz from its world of magic and wonder to a world ruled by machines.

The Witch Locasta (Julianne Hough) sends for Victoria and has her set off on her journey to meet with the Munchkins so that they can meet up with Tin Man before a war breaks out.  Going with her is Phadrig, who hopes he can find his brother.  What is a bit frustrating is that despite knowing they are attempting to prevent a war from occurring, there seems to be no sense of urgency. Even when Tin Man sends his guards out to retrieve those who have escaped, there never seems to be a real threat in this film.

Where my frustration with this film only intensifies is our introduction to Magnus (Ron Perlman) who is the not-so-cowardly son of the lion.  When we meet up with this pride of lions, they are given the temperament of cavemen who seem to only care about hunting and providing for their pride.  It’s not a bad idea, but the execution just fails as we don’t see them as crafty hunters, but more as bumbling fools.  But from here we meet with the Munchkins, who seem to be ready for war, and though this has the audience expecting something huge and epic, really turns into a measly schoolyard fight between the guardians of Oz and the Munchkins alongside the lions.  This could have been something good. This was a throwdown hyped to be an epic war, and the result is borderline laughable.  The characters are all computer-generated. Would it have been so hard to just copy and paste some characters just to make this feel at least a tad closer to being “epic”?

Unfortunately, the only clever thing that is brought to this film is the back-story to the Tin Man.  The animation in these bits is actually well done and teases a darker direction this film could have and should have gone.  There are other characters who pop up in this film that are a welcome sight, but it’s not enough to get me to care about this film, and that’s a shame, because there really is some potential here.  Rather than do a film for the entire family to enjoy, this seems to target a very young audience, as something to be used as more of a distraction rather than attempt to be a film that makes a lasting impact.

The Steam Engines of Oz is presented in the aspect ratio 1.78:1.  The 1080p image is arrived at with an AVC MPEG-4 codec at an average of 32 mbps.  The biggest problem I have with the animation is that it looks like a children’s video game.  While some of backdrops do look nice, there isn’t much detail to be found in the characters with the exception of the Tin Man.  Tin Man actually has a visual presence that is intimidating and works well. If only the same care and attention was given to the other characters.  The color scheme of the films works well, though the yellow tone in the final battle mixing with the reds and purples just seemed a bit muddy to me.  There were no artifacts that I could see here.

The DTS HD-Master Audio 5.1 track is a bit disappointing, Though the dialog comes through cleanly and can be understood, it’s the foley track that seems to underwhelm.  We get the sounds of the steam engines, and the score comes through nicely, but when it comes to some of the impacts, or simple ambiance, it’s there, but I would say this falls short of being an immersive experience.

There are no special features, but the Blu-ray does also come with a DVD copy of the film.

This is clearly just a film that is attempting to cash in on the brand name of The Wizard of Oz rather than deliver a film that is a worthy successor.  While young kids may enjoy this while it’s on the screen, this is something that will be easily forgettable by the time the credits roll, and that’s a shame, because this could have been something great.

Brent Lorentson is a horror writer and film critic based out of Tampa, Florida. With a BA in Digital Film, he co-wrote and co-directed Scavenger Hunt. His short stories have appeared in various horror anthologies. In 2019 his short script Fertile Blood will be a part of the anthology horror film Slumber Party. He is currently working on his first novel A Dark and Secret Place set to be released in late 2019. Favorite Films: Taxi Driver, Fight Club, I Saw the Devil, The Wild Bunch, Dawn of the Dead, A Clockwork Orange, Pulp Fiction, Heathers, The Monster Squad, and High Fidelity.
RWBY Volume 5 (Blu-Ray) First Reformed