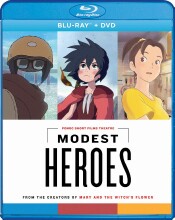 Short stories and films are often great ways to focus in on a singular theme. Whether you get yourself down to a few pages or fifteen minutes, you really get your message across instead of being misinterpreted across a longer medium. Disney and Pixar have done this for a number of years, and even though many have dismissed them as simple shorts or cartoons, it’s often the part of the movie that holds the viewer in the strongest way. Japanese studios such as Studio Ghibli have done this as well. Studio Ponoc, founded in 2015 and fronted by Yoshiaki Nishimura, released the smash film, Mary & the Witch’s Flower in 2017. Then last year, they came out with a trio of shorts for all of us to enjoy. Let’s take a look.

Kanini & Kanino by Hiromasa Yonebayashi
There are birds singing and fairies flying. Streams are bubbling, and we are introduced to a family of crabs (who are depicted as tiny humans who can swim and breathe on land and in sea). There is the brother, Kanini, and the sister, Kanino. The mother is very pregnant and has gone away to the surface to give birth. Their father has stayed with the brother and sister to help them get food and protect them from threats of the sea. However, one day something sinister takes away the father, and it’s up to the two kids to find and save him.

Kanini & Kanino feels pretty traditional for an anime film, as it has two children who have to overcome difficult odds to save their father.  In addition, they are overcoming their own fears of being alone since mother left for the surface shortly before the incident.  It works well in the sense that it draws you into the world and keep you there for the entire adventure.  Out of the three stories, this was the only one I felt needed a much longer story, as they could have stretched the drama with the father considerably.  But then they would have to give the crab family a real language instead of working us through facial expressions, body language, and a “foreign” language.

Life Ain’t Gonna Lose by Yoshiyuki Momose
The film opens at a hospital. There are various kids there being tested for all sorts of allergies (which is a really horrible process). Shun, one of the kids there, is allergic to eggs. He actually goes into anaphylactic shock should he be exposed. Well, today, unfortunately, is pancake day (which my family actually enjoys without eggs, gluten or soy), and that’s not going to go so well for Shun even with his mother at his side. Once out of the hospital, he finds it hard to cope as his allergy keeps him from enjoying simple activities with his friends and classmates. That is until one day when one of his baby teeth comes out, and he is from that day forward determined to overcome his allergy.

Life Ain’t Gonna Lose hits pretty close to home for me.  I have one severe allergy from birth, and then once I hit my mid-30’s, I developed all of these sensitivities including gluten, artificial colors, and others.  Furthermore, my son and my wife have issues with dairy, and my wife can’t touch beef or soy.  It’s really a mess.  So to sit there and watch Shun with his egg allergy really opened my eyes and my sympathies exploded for him.  Especially the incident with the ice cream; been there, done that, spent all night with splitting pain.  It’s rare for an anime to deal with issues like this, but I’m glad it did.

Invisible by Akihiko Yamashita
The clock ticks, the alarm beeps. It is time to get ready for work. Except the person getting ready for work is an invisible man. He works at a nearby car shop, but apparently as a numbers guy he never gets the chance to make a sale or even get noticed by one of his coworkers when he does something nice. On the way home, his moped suddenly stops working. He goes into a convenience store to buy an apple pie. When he is completely ignored (I would have taken the apple pie), he leaves the store in a huff. The invisible man then decides to throw away his helium tank (the only thing that keeps him rooted to the ground) and essentially end it all. As his body starts to float away, we can only hope that he has second thoughts.

Invisible is our last story and also the shortest of the three.  Again, I resonated well with this one, as the undercurrent of the story deals with people who are invisible.  A lot of people in this world (myself included) get ignored by society, and the “invisibles” often have to deal with depression and sometimes even suicidal thoughts and attempts.  Only then it seems like anybody really cares.  But what I liked with this one is that they wrapped up that complex subject in the style of a more traditional anime by giving us plenty of action and a couple of things to save.  It was very well done, and on repeated viewings might well turn out to be my favorite.

While all three stories are good to even great in terms of pieces, when viewed as a whole this feels a little short, pardon the pun.  It doesn’t even make an hour, and it really suffers without a fourth anchor, something twenty to twenty-five minutes to really cement the whole experience.  I realized this even before I did the research and confirmed this notion (more details in the Final Thoughts).  It’s a shame, because there is very little in way of criticism I can provide towards the three films when it comes to the stories they are telling.  The collection is just unfinished.

The film is shown in a 1.77:1 widescreen picture.  The styles vary greatly in video as they do in story.  Kanini & Kanino is fantastic to look at, as is Invisible, with sharp colors and plenty of thought towards the backgrounds and supplemental pieces.  Detail is on point, and those two stories feel like a much more expensive project rather than fifteen minutes.  However, Life Ain’t Gonna Lose, being the simplest of the three, really does not have the detail or immersion I would expect.  It is certainly still very good; it is just the one where I think a little more detail would have gone a long way.

The audio tracks are  DTS HD 5.1 in Japanese and English. English (SDH and original) and Spanish subtitles are provided.  Again, Kanini & Kanino leads the pack here with an amazing audio track, one that deserves to be put on blast as the ocean setting practically leaves you gasping for breath.  There isn’t much dialog to speak of (because of the “foreign” language) but what is there is certainly clear.

However, the other two shorts, while good, just felt a little lacking at times (which might also be skewed because of how good technically Kanini & Kanino is).  There were no issues with the dialog in either short, but the background effects and surround felt lacking, something I was very surprised with when it came to Invisible.  Perhaps it was supposed to be suppressed because of the theme behind it, but perhaps they just took it too much to heart and could have shown off a little bit.

The Modest Heroes of Studio Ponoc 21:35 : Yoshiaki Nishimura, founder and lead film producer at Ponoc Studios, takes on a history of why his studios decided to do a collection of short films. They talk about the process, themes, and each of the films individually and how they came to be. They also talk about the studio’s identity and how they want to make films going forward.

Film Completion Press Conference 9:43 : This was held on August 19th (my birthday!), 2018. It included the cast and the directors. In order to make it meaningful, they got each of the filmmakers to put down a single keyword related to the short film on a card, show it to the audience and then explain it’s meaning. They also take time to speak with Kaela Kimura, the singer and songwriter, about how she came up with the theme song.

Japanese Cast Interviews 8:23 : We speak to a variety of cast members from the three films as well as Kaela Kimura again to talk about music. One interesting note, they do also include the Invisible Man from Invisible voiced by Joe Odagiri, who is not in the previous conference. The obvious joke was maybe he was there, just invisible? (OK, moving on.)

Trailers 5:49: Full-length US trailer, two full-length Japanese trailers, and two Japanese teasers. The last teaser is of interest as it doesn’t show any footage from the film but rather the creators working and lots of concept art and sketches.

As mentioned above, the Short Films Theatre was supposed to have four segments. Unfortunately, Isao Takahata passed away on April 5th, 2018 of lung cancer, and there is almost nobody who could have replaced him and done a suitable job on such small notice. It is unfortunate, as the trio of films does feel like it is missing something, an anchor that sends this collection from pretty good into really great. All three films are fine productions on their own, but it just never quite got there for me despite a couple of the pieces hitting very close to home (allergies and being invisible).

The technical merits of the disc are strong. Video is delightful, as the three art styles are visual candy for the viewer to enjoy. Audio is a little uneven, as Kanini & Kanino is fantastic in the sound effect department, but the other two are kinda in the middle. The extras nearly equal the length of the three films and do a good job of going into the process of the films as well as give us a background of the voice cast. A little extra work could have been put into the various directors, as I feel their contribution isn’t represented enough. I give this package a good (not great) recommendation, and it is best viewed if you keep your expectations in check. Hopefully Volume 2 comes out at some point and blows away this first piece. I’ll be looking for it; enjoy.

Michael Durr has been reviewing movies for the better part of fifteen years now. He primarily enjoys thrillers, sci-fi, animation and even a little courtroom drama. His favorite films include Escape from New York, the Goonies and anything with Alyssa Milano. When he’s not praising Kurt Russell as the greatest actor of our time or scratching his head over a David Lynch flick, he’s spending time at home in Texas with his lovely wife, Lori and his amazing son. How they put up with him is a mystery, but even Basil Rathbone doesn’t have the time to solve that one.
Late Night Swingtown: The First Season