Posted in: Game Reviews by Archive Authors on August 30th, 2004 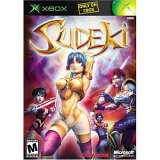 The RPG market for the X-Box is really heating up. Within the last two years the X-box has arguably had the 2 best single player RPG’s out there – Morrowind and Knights of the Old Republic. And with Fable to make it’s entrance soon along with KOTR II in the works, it would take something truly memorable to make a serious impact in the RPG world of the X-Box. Sudeki is Climax Studios attempt to break into the upper echelon of the RPG market.

In Sudeki, you play as four different ch…racters – Tal, Buki, Ailish, and Elco – who are brought together to discover the truth behind aliens dropping from the sky. Climax does an admirable job of developing a back story for each of the characters but no where near the level addressed in the Final Fantasy series. For example Tal’s father is a great military leader but a lousy father, hence leading to the expectation that there will be a great showdown between the two. However, this never occurs and his father disappears halfway through the game never to be seen again. That never happens in Square games (just think of Tidus in Final Fantasy X). At least none of the characters are whiny or annoying.

In terms of gameplay there are some pretty standard features here. Your party meets in a town where you talk to all of the NPC’s to get information and quests. You can knock over crates and barrels for goodies and open chests for treasure. The story is linear, unlike Morrowind which is completely open ended, which sometimes is preferable – it’s nice to have objectives. The production is very good with excellent voice acting and a wide variety of accents for the main characters and NPC’s. There is a little humor here and there but it becomes markedly absent near the end of the game.

One critical element of RPG’s is the management of weapons and armor. Upgrades are available by visiting your friendly neighborhood blacksmith. Upgrades include boosting attack power, increasing the chance of getting a critical hit, or being able to drain an enemy of health. Unlike other RPG’s once you get to the midpoint of the game money is easy to come by so you can amp up your characters for some serious alien butt kicking.

The true test of an action RPG is the combat system. This is where Sudeki shines. The combat, while a little tricky at first, becomes addictive once you’ve powered up. Tal and Buki are hand to hand fighters and Ailish and Elco are your shooters and once they get going they shoot all of the time during combat. While using these characters you can switch into first person mode and pick off enemies at your leisure. Switching characters is easy as pressing the white and black buttons. The real fun comes when you take control of Tal and Buki. The action is controlled via a third person view (although the camera gets stuck occasionally behind walls or other annoying obstacles). The controls are simple with X and A serving as your attack buttons. By pressing the buttons three times you can pull off some very cool looking combos. The action gets frenetic with all four characters kickin’ butt and taking names with upwards of twenty opponents on the screen at any time.

The music is appropriate but lacks the emotional punch that the Final Fantasy series has. However, there is enough variability that it never gets boring or tedious.

Sudeki falls short. Each character has special abilities – Ailish can see invisible objects, Tal can push specific blocks, Elco has a jetpack (that only allows him to fly horizontally – what’s up with that?

The most disappointing aspect of Sudeki is that you fight bosses with only one character. This rings true for the final boss as well. What’s that about? One of the most satisfying aspects of Final Fantasy was that you spent hours powering up your characters for that final confrontation and when it occurred you unleashed the combined efforts of your team to produce the ultimate victory. Sadly this feeling is lacking with the decision to go solo against the baddies.

The environments show off a nice range for the world. The variance between sunny, vibrant locations and dark, muddled areas works perfectly for the story. The environments — with detailed trees and foliage, patchwork houses, and fantastic lighting — are the strong point visually. This is one of the most colorful RPGs that I have ever seen. The characters are not as detailed is one would like given the level of detail put into KOTR and Morrowind. There is some dropping of the framerate when the action gets really intense with a large number of enemies biting the dust at the same time.

As previously mentioned, the voice acting is very good and the score is entertaining. There is a very good dynamic range with some very effective use of the surround speakers. Some of the explosions have the bass rumbling. Effective use of sound.

There is little replay value here after you win the game – and I won it in about 19 hours. You could go back and finish some side quests I don’t think they’re really worth the time.

Sudeki is a really good first try for Climax Studios. If they can tweak the combat system (i.e. no solo battles against the bosses) and develop deeper storylines, a sequel could enter the elite of RPGs.