Posted in: Disc Reviews by Michael Durr on August 17th, 2009

Pixar & Dreamworks have been monsters at the game of big budget film animation for quite sometime now. Many of us have enjoyed Shrek, Toy Story and countless others. Even their duds aren’t half bad. But there was bound to come a time when others need to share in the spotlight. In 2007, Filmax Animation, a Spanish company decided to release a film about a Donkey who has aspirations of being more than just another as… Sorry kids, I lost my place. It’s a film about a donkey who wants to be a horse, of course of course.

We all know the story of Don Quixote (or Quijote) and how he recruited Sancho to be his faithful squire. They traveled the land on quests in the name of chivalry and return home to find that they are indeed famous. However, Don Quixote has more important things in mind like finding Dulcinea, his long lost love & walking the countryside in search of truth and justice.

But this story really isn’t about Don Quixote. It’s not even about Rocinante, his horse that has seen better years and has spent his free time protecting a bunch of hens and a rooster. It’s about a donkey named Rucio. He is constantly insulted by the horses on the farm but Sancho still feels loyal to the little donkey. Rucio wants more out of life, he wants to be a horse.

So Don Quixote finds out that there is a duel proposed between him and the Knight of the Moon, he accepts. He convinces Sancho to come along and even promises him that he can become governor of a small island should he aid them in his travels. The horse, Rocinante and Rucio also accompany their owners in their travels. Along the way, they find deception, false kingdoms and imposters to the name of Don Quixote. But can they find the true prize of Dulcinea and her true identity, if she even exists?

Then, it all becomes a mess. Seriously, the first thing you’ll notice immediately is that the animation is amazing. It’s gorgeous and if I could turn the sound off and understand the movie, I’d be a lot better off. However, with the sound on, it is just as hard to understand. It certainly tries to play to the Shrek crowd with the adult humor and a near photo copy of the Eddie Murphy famously voiced sidekick.

But gone is all the charm of the character or any of the other characters. They stick in characters that show to have some promise (like the lion or head chicken) and then barely take the time to elaborate on them. All we can really gather is that Quixote is searching for Dulcinea which nobody thinks she exists and that the Donkey at some point will be a real horse and help save the day. Oh yeah, Sancho spends 90 minutes doubting himself and Quixote but suddenly lights up when any mention of owning an island is spoken about.

The animation is simply stunning. Presented in 2.35:1 anamorphic widescreen, you would be hard pressed to find any problems here. Color is beautiful and all of the tones look right on cue. Computer animation is a wondrous thing. The only negative I could find in this masterpiece is that some of the animation looks a little wooden. Very few movies, even animated ones look better than this.

As nice as the video is on this disc, audio is about as puzzling as the story line. There is 2.0 track for the English Dub, a 2.0 for the Spanish original and a 5.1 French Dub. Huh? French gets the best track, which isn’t even the original or the English version. Furthermore, I couldn’t find a good way to access any English Subtitles. So, the only decent thing to do was listen to the English 2.0 track. The dub is good enough and the dialog is clear but it lacks any oomph that you would expect. It’s just average and you sincerely expect better. I also can’t understand for the life of me why they place pop songs during the most inopportune time in the movie.

Honestly, when I got this disc, I thought the people at Dreamworks made a direct to dvd sequel to Shrek. One of the taglines to this movie is from the Producers who saw Shrek. They even joke about it in the first five minutes of the movie. But after watching the movie, I don’t think I can compare this to anything Dreamworks has done. Sure, the animation is fantastic but the story is so off the wall and confusing, you’ll barely recognize the story of Don Quixote or the donkey. The audio choices and lack of extras don’t help either. This movie is okay for kids, there are a few adult jokes with some interesting cleavage by the maidens, but it is accurate at PG with a lean towards G in this day & age. Recommended if you are willing to keep the sound off. It’s better that way. 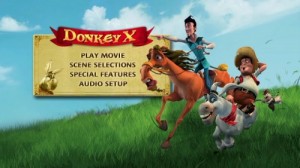 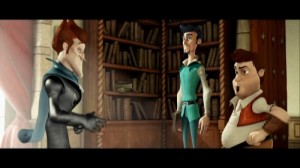 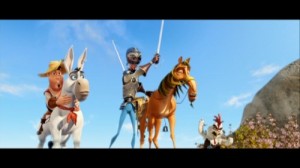 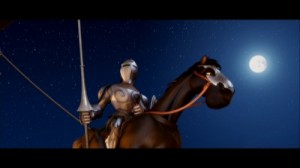 Michael Durr has been reviewing movies for the better part of fifteen years now. He primarily enjoys thrillers, sci-fi, animation and even a little courtroom drama. His favorite films include Escape from New York, the Goonies and anything with Alyssa Milano. When he’s not praising Kurt Russell as the greatest actor of our time or scratching his head over a David Lynch flick, he’s spending time at home in Texas with his lovely wife, Lori and his amazing son. How they put up with him is a mystery, but even Basil Rathbone doesn’t have the time to solve that one.
I Love You, Man (Blu-ray) Bounty

Man on the Moon (Blu-ray)