Posted in: Disc Reviews by Brent Lorentson on October 13th, 2016 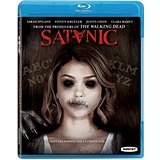 When you have a title like Satanic, it’s kind of hard to not start to build up expectations right out of the gate.  I like a horror film that isn’t afraid to go dark and play with the subject matter of the occult, because honestly it’s the only topic that can manage to get under my skin.  The Exorcist in my opinion is hands down the best horror film of all time and manages to haunt me after a viewing simply because the boy I once was who went to Catholic mass every Sunday knew that it could happen.  That’s the thing about films like Satanic; you have a built-in audience that you already will have hooked from the start and have a reason to be afraid, simply because of faith. So when a movie has so much momentum going for them and it delivers such a lackluster result, it shows that certain people just shouldn’t be playing in the horror sandbox.

Chloe (Sarah Hyland) is on a road trip to a music festival with her boyfriend David (Stephen Krueger), but along the way they’ve decided to make some stops at the locations of some famous occult murder sites.  The decision to make these stops comes at the suggestion of Elise (Clara Mamet), her cousin, along with Elise’s boyfriend Seth (Justin Chon).  If not for the blood relation between Chloe and Elise, it would be difficult to imagine these couples ever being together, since Chloe and David seem to be more traditional college students, while Elise and Seth seem to be nothing more than Goth kids who are trying so desperately to be “dark”.  This is a problem I had from the start; I never bought into this Goth couple.  We’ve seen this story played out before in Kalifornia, where two odd couples go on a reluctant road trip to visit murder sites, but what worked is  they cast the roles and made it more believable.  By making Elise and Seth a joke from the start it simply pulls away any chance for attachment to these two despite blood relation. Even trying to imagine people on a road trip to the Coachella but deciding to detour for this murder tour is a hard leap for me.

Even their arrival to Los Angeles with a very ominous sighting of a distressed woman in an office building is a bit off-putting. It’s a situation that occurs that a savvy film watcher will catch on to what is being set up, but you really hope that’s not the direction this film goes.

Well, the gang’s satanic tour of LA takes them to a shop that caters to the occult, and after they are rudely kicked out of the establishment, the gang gets the idea to follow him out to where he lives. This is a decision that doesn’t make a lick of sense, but still we go along for the ride, and it leads the gang to an actual satanic ritual that they walk into already in progress.  Let me just say, I hated this sequence to the point where I nearly stopped watching the film; we’re supposed to believe this group of four kids talking and stomping around and walking to the front of a building with large holes in the walls and broken windows, and numerous cult members standing around in silence facing the four intruders, BUT NO ONE SEES THEM?!?!  If the gang was being quiet and sneaky I could understand, but they’re not even hiding in the dark; they are well lit and doing nothing but attracting attention to themselves.

Then something strange and magical happens; the film finally decides to shift gears and be good.  Really, this is one of the worst first acts for a film I’ve seen in some time, and if I were not tasked with reviewing this, I would have shut the film off before I even got this far. But things do thankfully start to change once the gang discovers one of them is missing their phone, and later the next morning they get a mysterious call from someone they saw at ritual.  It’s their curiosity and their intention to help this individual who has their phone that takes them on an even crazier path and has them get involved with a ritual of their own. No longer spectators but participants, the gang find themselves marked, and one by one evil seems to be after them.

Finally when this film gets rockin’ and rollin’ I’m more than willing to forgive this first act so long as it commits to what it seems to be setting up for the gang.  But then it takes an easy way out. Everything comes to a head at a location that has no connection to what they are involved in, and we see a cop-out for how everything comes together. This final sequence, though it makes sense conceptually, makes no sense at all within the context of the film or anything to do with the occult. It’s simply a sequence that screams they don’t have enough time or money to deliver a satisfying conclusion, so instead we get this.

Satanic is presented in the aspect ratio 2.40:1.  The 1080p image is arrived at with an AVC MPEG-4 codec at an average of 22 mbps.  The film as a very clean and crisp look to it that is sharp on detail.  For the most part it has a very made-for-TV look to it which gives it too much polish for the subject matter and doesn’t allow for any organic atmosphere. There are no compression issues, and there is a solid amount of separation and depth with the black levels.

The DTS-HD Master Audio 5.1 track is fairly standard with clear dialog throughout.  Scares are cheaply taken by the use of stingers.  There are some drones used for building some suspense, but really it’s not enough to save this.  The music laid into the film plays a little loud, but that’s expected for a horror film.  It’s not till the final sequence where we get to have the full surround mix utilized.  It works for the off camera horror and is effective.

The Making of Satantic: (6:47 ) A brief look behind the scenes where we get to hear about how the film was shot in 15 days, which can explain for a lot of things.  I can appreciate what they accomplished in a short amount of time even if I’m far from a fan of the film. We get decent clips of how they executed some of the scenes as well.

The Cast: (5:28) Little interviews with the cast as they discuss each of the characters and how the actors were to work with on the film.

Special Effects: (3:27) There are a lot of practical effects in the film, and that does go a long way with me.  I wish we could have seen more in the final act rather than go the route of seeing less, simply because we saw nothing at all.

Behind the Scenes Footage: (1:47) A collection of footage of behind-the-scenes clips of the making of the film.

It’s been a while since I’ve seen a film that has frustrated and annoyed me to this level.  Subtract the first act of this film and things are not so bad, but I feel the director just has no grasp on horror.  I’ve looked at his credits, and he has very solid television work, but Satanic is an entirely different beast. You look at the writer of the film and you see he’s credited for writing The Shallows, which for me was a sleeper hit of the summer. I really wanted to like this; I’m hopeful with every title I see despite budget or genre, but this just fell apart way to soon.  In better hands, a larger budget, and more time to film this could have been something worth checking out, but for what this is now, run away from this release.

Brent Lorentson is a horror writer and film critic based out of Tampa, Florida. With a BA in Digital Film, he co-wrote and co-directed Scavenger Hunt. His short stories have appeared in various horror anthologies. In 2019 his short script Fertile Blood will be a part of the anthology horror film Slumber Party. He is currently working on his first novel A Dark and Secret Place set to be released in late 2019. Favorite Films: Taxi Driver, Fight Club, I Saw the Devil, The Wild Bunch, Dawn of the Dead, A Clockwork Orange, Pulp Fiction, Heathers, The Monster Squad, and High Fidelity.
“31 Nights Of Terror” Penny Dreadful: The Final Season (Blu-ray) X-men: Apocalypse (UHD Blu-ray) (4K)