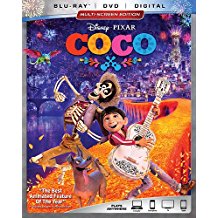 Up until recently, Pixar Animation Studios had a pretty spotless reputation. (At least when it came to the quality of their films.) But while the studio’s last three efforts (Cars 3, Finding Dory, The Good Dinosaur) have been financially successful, Disney’s own in-house animation studio (Moana, Zootopia, Big Hero 6) has been out Pixar-ing Pixar in terms of delivering creative, crowd-pleasing blockbusters for all ages. (I didn’t even mention a little movie called Frozen.) That’s why I’m pleased to report that Coco — Pixar’s moving, colorful and exhilarating take on Mexico’s Day of the Dead holiday — is a thrilling and touching return to form.

“We’re the only family in Mexico who hates music. But me…I’m not like the rest of my family.”

Miguel Rivera (voiced by Anthony Gonzalez) is a 12-year-old boy who lives in a small Mexican village with his shoemaking family. Coco begins with Miguel excitedly relaying his family history, which includes his great-great grandfather abandoning wife Imelda (Alanna Ubach) and daughter Coco to pursue a career in music. As a result, the Rivera family vowed to completely ban music from their lives. That’s a problem for Miguel, who dreams of becoming the next Ernesto de la Cruz (Benjamin Bratt), a matinee idol who was also Mexico’s most famous singer/songwriter until he was killed in an untimely accident. Miguel goes to extreme lengths to try and perform in a talent contest during Dia de los Muertos (Day of the Dead), the Mexican holiday where dearly departed relatives come visit their living family members.

Unfortunately, Miguel winds up getting up close and personal with some skeletal relatives who have arrived for Day of the Dead festivities. The family members bring Miguel to the Land of the Dead to try and sort things out before the young boy becomes permanently stranded in the afterlife. Great-great grandmother Imelda offers her blessing to send Miguel back among the living…as long as he vows to completely give up music. Instead, Miguel teams up with a desperate, charming hustler named Hector (Gael Garcia Bernal) to find his great-great grandfather and secure his blessing so that Miguel can go back home and pursue his musical dreams.

At first glance, making a kids’ movie centered around something called “Day of the Dead” and mostly set in the afterlife might feel a bit morbid. But directors Lee Unkrich (Toy Story 3) and Adrian Molina have crafted a beautiful and touching fable about the way memories can keep family members and friends alive even after they’ve passed away. The idea is encapsulated by “Remember Me,” Ernesto de la Cruz’s most famous song and the movie’s theme. Conversely, spirits like Hector — who hasn’t received a Day of the Dead offering in a long time — are unable to cross the bridge into the land of the living during Dia de lost Muertos and risk disappearing from the afterlife for good.

The bridge — which is made of resplendent Aztec marigold — is a stunner and one of the movie’s many affecting nods to Mexican culture. With its hillside houses that appear to be stacked atop one another, the movie’s sparkling Land of the Dead looks like the city of Guanajato. The film opens with Miguel’s family history playing out on lively Mexican banners, which I got to see for myself during a recent trip to Mexico with my wife. There are also subtler, funnier touches…like the fact that Miguel’s Abuela (Renee Victor) wields a chancla as if it were a six-shooter. All these great cultural touches serve to enliven what is essentially a pretty standard Disney story: young protagonist wants to pursue a dream but is held back by disapproving parents. (There’s even a cute animal sidekick in the form of dopey stray dog Dante.)

Gonzalez’s vocal performance is an infectious delight from the very beginning. Even when Miguel becomes petulant, we’re on board with the boy pursuing his destiny. Garcia Bernal is a charming trickster, Bratt brings a surprising dimension to de la Cruz’s pompousness, and much of the supporting cast is comprised of Mexican performers. That being said, the actors somewhat take a backseat to the movie’s wonderful music. In addition to “Remember Me” — courtesy of married songwriting duo Kristen Anderson-Lopez and Robert Lopez, who also wrote the songs for Frozen — I loved “Un Poco Loco,” the breakthrough ditty Miguel performs in the afterlife.

The word “slump” might be a bit harsh in describing Pixar’s recent output. Even though the studio literally made a movie about feelings, Coco ranks among its most heartfelt and emotional films. (I may or may not have cried for 10 minutes straight during the finale.) It’s a helpful reminder to never sleep on Pixar and “never underestimate the power of music.”

Coco is presented in an aspect ratio of 2.40:1. The 1080p image is arrived at with an AVC MPEG-4 codec at an average of 25 mbps. Coco is a celebration of the most vibrant aspects of Mexican culture, and that is immediately reflected by the explosions of color throughout the film. They are immediately apparent in the “papel picados” that offer the backstory of Miguel’s family and continue through the young boy’s eye-popping first entry into the Land of the Dead. Of course, there’s more to this presentation than bright, shiny colors. There is also tremendous texture on display, particularly in the early part of the film…I could practically smell the inside of the Rivera family’s shoe repair shop because it is presented so vividly. And since much of the action takes place during one fateful, frantic night, the disc also gets to flex some remarkably deep black levels. Simply put, this visual presentation is absolutely spectacular.

The DTS-HD Master Audio 7.1 track is absolutely the equal of the tremendous visual presentation. Music is a crucial part of Coco, so it’s no surprise that fanatical care has been taken to ensure each instrument — down to the last acoustic note — is accounted for here. There are also more subtle-yet-effective touches, like the way you can barely hear mariachi music wafting from the rear speakers during sequences when Miguel visits the plaza. At the other end of the spectrum, this 7.1 presentation flexes its muscles and provides a wonderful wallop for the larger scale musical performances. The track equally impresses for non-music-related reasons, including Miguel’s dreamy, disorienting arrival in the Land of the Dead and some sub activity that provides an extra oomph for some of the cartoonish pratfalls.

(Available on the Feature Film disc)

Welcome to the Fiesta: (2:16) This is a brief, proof-of-concept diarama created by the filmmakers early on to show Coco‘s lively potential. (The short, swooping sequence is impressively presented as a single shot.) Features optional commentary from director Lee Unkrich, co-director Adrian Molina (who was only a storyboard artist when this piece was created), and producer Darla K. Anderson.

Mi Familia: (10:00) Pixar’s artists amusingly talk about the quirky rules in each of their own families, though none are quite as strict as the severe “No Music” policy Miguel has to deal with.

Dante: (6:14) A closer look at the lovable street dog who serves as Miguel’s faithful companion. We also get a glimpse at some of the real-life inspirations for Dante, some of which also tried to snack on “ofrendas” (family offerings during the Day of the Dead).

How to Draw a Skeleton: (3:18) A self-explanatory tutorial led by one of Pixar’s many talented artists.

Feature Commentary: Unkrich, Molina and Anderson offer a friendly and informative commentary that covers all the different iterations of the story (starting from several scrapped openings to the film). They also discuss the research trips to Mexico that yielded a lot of Coco‘s best details. (The “chancla” wielded by Miguel’s Abuela was originally a wooden spoon.)

A Thousand Pictures a Day: (20:03) An excellent, more extensive look at the aforementioned research trip the Coco team went on as the film was being developed. The team also points out some Easter eggs from other Pixar movies that were snuck into Coco.

The Music of Coco: (13:12) Obviously, music plays a major part in this film, so it’s great to see the extensive care given to the acoustic instrumentations. We also get a sneak peek of the standout songs (“Un Poco Loco”, various version of “Remember Me”) being created and recorded.

Land of our Ancestors: (6:19) Focuses on all the different ways Coco‘s animators set about enlivening a story about the Day of the Dead. I especially enjoyed getting a peek at the real-life places that inspired the colorful Land of the Dead.

Fashion Through the Ages: (8:39) This featurette takes a look at all the ways the movie’s animators made the clothes in Coco pop off the screen. The costumes also had to move and dance along with the characters as they performed their beloved music.

The Real Guitar: (3:08) Guitarmaker German Vazquez Rubio gives us a quick, behind-the-scenes peek at his craft while we also get glimpses at the creation of the animated instrument in the film.

Paths to Pixar — Coco: (11:44) Pixar artists of Mexican descent talk about their professional and personal journeys that ended with them working at the acclaimed animation company.

How to Make Papel Picado: (2:19) Another tutorial! This one will teach you how to make the colorful, cutout banners that appear at the start of the film.

You Got the Part! (2:12) Star Anthony Gonzalez was originally hired to voice Miguel on a temporary basis. This featurette offers a look at the moment the young actor found out he landed the part for real. As if the feature film didn’t make me cry enough.

Deleted Scenes: (33:07) There are 8 scenes total. Unkrich and Molina offer short intros for each sequence, which offer an interesting look at all the different version of Coco. (Originally, the movie was more of a “burst-out-into-song musical,” which didn’t totally make sense when Miguel’s music-hating family starts singing in one of the scenes.) Featuers a Play All option.

But little gold statues or not, Coco is an excellent and emotional return to form for Pixar. As if that wasn’t enough, this Disney Blu-ray release features a top-notch A/V presentation and a collecdtion of special features that elevate and enhance an already wonderful feature film. (Bonus points for leaving off “Olaf’s Frozen Adventure”, the polarizing short that preceded Coco in theaters…at least for a little while.)

Grab this disc and give this movie a look when you get the chance.

Red Sparrow A Wrinkle in Time