Posted in: Game Reviews by Michael Durr on October 12th, 2004 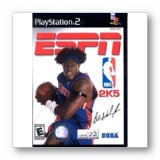 ESPN NBA 2k5 is the basketball game for the cool and low priced Sega Sports at a meager $19.99 price point. My copy was purchased for $14.95 in fact at the local Best Buy. By competing with people’s wallets, they have established solid competition with NBA Live 2005 by EA before they even open the box. As shown by well placed titles such as NFL 2k5 & NHL 2k5, one would think Sega Sports would have a fine showing with their basketball title. They have folks, it is a great sports game and debatably the best showing…this season, but it comes with a couple of tiny faults which need to be explored.

The last time I saw a Sega Sports basketball game was NBA 2k2 for the PS2. I thought the graphics were superb then. They are even better now. From Yao’s face to A.I.’s cornrows, they are accurately done. The courts look fantastic and everything is well rendered. There are many camera views within NBA 2k5, however you have to play with them to get it right, especially for us side camera players who are used to the NBA Live games of yesteryear(Lakers vs Celtics; thank you very much). The action for the most part seems to be flying fast, and your guy thanks to the turbo function can literally zoom to the basket. However, the crossovers and shots can tend to slow down, and seem lethargic. I found myself a tad frustrated at how long sometimes a crossover would take to complete, sometimes feeling like I wasn’t controlling the character at all. But much to Sega’s credit, the graphics are very good. The action keeps up well, looking and feeling like a real NBA basketball game.

No matter how much the image of basketball is hip hop, I just cringe a little bit when I hear the rap or constant bump bump bump of my woofer beside me when I start up a basketball game. But I can forgive most of that, if I actually recognize some of the tunes that play or it has a good beat I can get along to. Unfortunately this is 2k5’s weak point. From Abstract Rude to Romanowski, it isn’t a very inspiring list. While the list that appears inside the booklet seems to be large, certain tunes seem to be way too frequent to be randomized. However, once you get inside the game, and get to hear the basketball sounds, it is so much more enjoyable. From the screeches to the ball rattling around on the rim before going swish through the hoop, it is pleasing to my ears and faithful to the sport. The commentary of Bob Fitzgerald & Bill Walton (with sideline reporter Michele Tafoya) is very good, though as with any sports game, it can get repetitive. Let’s put it this way, when I can get a game to say(or even try) my last name, I’ll give it 5/5 in a heartbeat. As is, the Dolby Pro Logic helps my speakers sound great, even if its hip hop.

The very definition of good gameplay is gameplay that is so good, that even if you lose, you have a grand time doing it. Even if you suck (which at first I tend to), that the game is rewarding and keeps you coming back for more. NBA 2k5 makes that a staple of their play. This game relies on the analog sticks which I have to confess is hard for me to get used to. In fact the only way your guy will move up and down the court is thru using the left analog stick. But what I come to find is that makes certain moves so easy to come by. Everything from Passing to Stealing to Blocking to playing defense is well defined here. Passing is so smooth that you will be making alley oops and good lead passes in no time. However, notice I left out something that isn’t A grade material, and that is Shooting and in more defined manner, Free Throw Shooting.

Lets start with Shooting first. One thing that there are problems with in this game is the art of getting your shot blocked a lot. It’s definitely not so bad that it takes away from the game, but expect to get walloped on a lot. Also, the computer has a very nice habit of making a lot of their shots. If you don’t put bodies on them all the time, almost any uncontested shot seems to go through the basket. Now Free Throw Shooting, something I have had a lot of trouble with in the Sega Franchise. As you might already know, it involves lining up the two analog sticks and hitting a button at the same time. This sounds simple in theory, in fact I hear all of these guys on gamer boards saying I haven’t missed a free throw yet. Okay, that’s fine, but I think I’ve made maybe 25% of mine. I’m really not kidding. While the analog sticks are brilliant for moving your guy around, they are still way too skittish when it comes to lining up a shot and keeping them there to press a button. Would it kill them to have person just shoot up a free throw and whether it goes in or not is based on a mathematical formula like the olden days. Free throws should not be a complicated system. Alright, I’ve harped on that enough.

The many modes of this game can make for an exciting time. Of course you have your classic exhibition, season, street ball, and online chicanery. But the two modes that blow away everything else is the 247 and the Association or Franchise mode. 247 is insane in a word. Basically you model a single street baller down to whatever look you want(for me its a 5’9 190 super stud…man I should have made him about 5 inches taller so he could rebound some). Then you put up in tons and tons of different gameplays including Long Range ball, Bomb Ball, 2 on 2, 1 on 1, etc etc etc. In addition, you can train your character to increase in stats by going through various exercises and completing them successfully. You gain points and eventually get to where you go up against Boss Characters. In addition you can take your baller online against others.

Association mode or ESPN’s name for the Franchise mode is another nice addition. This takes you through managing a team with the typical trying your team into a powerhouse and winning it all season after season despite a salary cap and cheerleaders who won’t put out…sorry, personal grudge, many moons ago. Anyhow there are a few quirks, such as Team Chemistry which is based on how the players work with each other and can fluctuate throughout a season. Also you can simulate a game, play it or do something called Full Authority which is a kind of coach mode where you make certain decisions but don’t play the game so much. Good for you guys who suck at the game but good at decision making.

This should be the grand showing off for sports games. A game you want to play so much that you sit at work or school just planning it out where you are going to take your team next. Who you are going to play, who you are going to bench. It is an addiction to a point. Well, take that addiction, and multiply it by ten. In fact, it is hard for me to sit here and not play this game right now. This game is like crack, I’m not kidding. Not that I’ve ever, hrmmmm, stay in school boys and girls. Anyhow, Association mode and all the little tools of tweaking your team is tight and you play with your team until your heart is content. However, when your mind turns to 247, oh just throw your aspirations, dreams, wives, and that little girl named Jane who dresses up in nurse’s uniforms away (okay keep Jane). There is no hope for you now. You will constantly be leveling up your player in attempt to make it better than last time and beat more opponents. But then it turns it up several notches.

First being, at certain times of the actual day (it depends on your system clock), you will only play certain games. You will find yourself checking the schedule of when your favorite type of game is being held and adjust your activities accordingly. Second, item and cell phone collections. The items are basically features or jerseys or other articles of clothing to customize your 247 player. Cell Phone numbers are also fun too cause you call on these guys to practice with and play 2 on 2 contests with. In addition you also gain respect points which can be very useful. Finally, and the kicker your stats degrade over time if you don’t play. Talk about feeding that addiction, heck my player probably just lost a point or two in his three point shooting just sitting here. See what you made me do!

In closing, ESPN NBA 2k5 is perhaps one of the finest budget offerings I have ever played. Honestly, I haven’t felt this at home with a game since well I dare say Lakers vs Celtics in the Genesis days. Its fun, and even though I have not checked out NBA Live 2005, I’m just not sure that it can be any better than this one. 247 has got me so hooked, that I’m thinking on taking up smack just to give me something else to do. The only issues in the game boil down to Sound (which if you do like hip hop, you can get around it), and Free Throw shooting. But somehow with Free Throw shooting, I think practice is the key. One final thing I leave you with of worthy note. That is play with the game settings, if you don’t like how fouls or steals or anything else is controlled, change it with the great sliders. It turns whatever bad experience you are having (except free throws) into a better time. Trust me, they work wonders. With that, go buy this game, and be sure to smile big when they ask “Do you want crack with that?”.

Michael Durr has been reviewing movies for the better part of fifteen years now. He primarily enjoys thrillers, sci-fi, animation and even a little courtroom drama. His favorite films include Escape from New York, the Goonies and anything with Alyssa Milano. When he’s not praising Kurt Russell as the greatest actor of our time or scratching his head over a David Lynch flick, he’s spending time at home in Texas with his lovely wife, Lori and his amazing son. How they put up with him is a mystery, but even Basil Rathbone doesn’t have the time to solve that one.
Open Water Wire — The Complete First Season, The